Happy 70th Anniversary to the Queen and Duke of Edinburgh, who were married at Westminster Abbey on this day in 1947. In honour of the couple’s Platinum Anniversary, we are taking a look at the post-war wedding of the then Princess Elizabeth to then then Lt. Philip Mountbatten (formerly Prince Philip of Greece)- 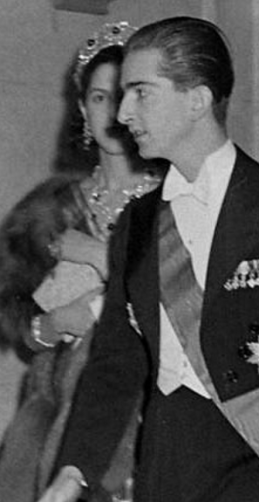 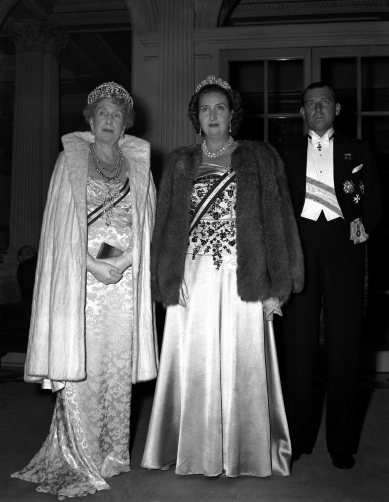 The King George VI and Queen Elizabeth gave a private dance at Buckingham Palace on November 17, 1947 for friends of Princess Elizabeth and Lt. Philip Mountbatten. In this image the Queen consort of Spain, Victoria Eugenie of Battenberg, left, together with the Countess and Count of Barcelona, (Don Juan) are seen leaving Claridges Hotel in London, United Kingdom on Nov. 17, 1947, for the Royal dance. (AP Photo/Dennis Lee Royle) 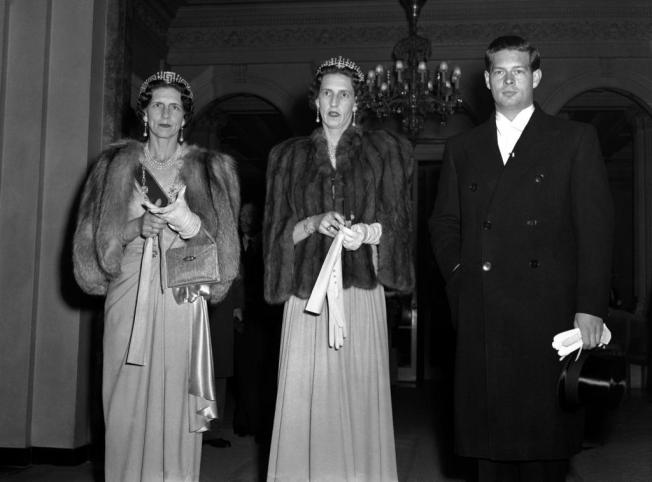 On the evening of November 17th, King George VI and Queen Elizabeth hosted a Ball at Buckingham Palace for friends of the couple and royal guests. While the event was private, some guests were pictured leaving their hotel, including King Peter and Queen Alexandra of Yugoslavia (wearing the Yugoslavian Emerald Parure), Queen Victoria Eugenie of Spain (in the Fleur de Lys Tiara), the Count and Countess of Barcelona (wearing the Mellerio Shell Tiara), King Michael and Queen Helen of Romania (in the Romanian Greek Key Tiara), Princess Irene, Duchess of Aosta (wearing her Diamond Tiara), and members of the Greek Royal Family. Bridesmaid Lady Pamela Hicks noted in her autobiography that Crown Princess Juliana of the Netherlands “caused a stir” by bemoaning that “everyone’s jewellery is so dirty”, but she (Lady Pamela) was amazed that they (the jewels) had survived the Second World War. At the end of the evening, the King is said to have led a conga line through the State Rooms of Buckingham Palace.

Princess Elisabeth rode in the Irish State Coach from Buckingham Palace to Westminster Abbey. She was accompanied by her father, King George VI. The new Duke of Edinburgh, created just that morning, was accompanied by his Best Man, the Marquess of Milford Haven, as he rode by car from Kensington Palace to the Abbey.

The wedding ceremony, officiated by the Archbishop of Canterbury, Geoffrey Fisher, and the Archbishop of York, Cyril Garbett, was recorded and broadcast by BBC Radio to 200 million people around the world. After the ceremony, the couple processed down the aisle to the tune of Felix Mendelssohn’s “Wedding March”. followed by members of their families and royal guests.

The couple rode back to Buckingham Palace in the Irish State Coach, waving to the thousands of crowds that lined the route.

After a wedding breakfast in the Ball Supper Room of the Palace, the couple went out onto the balcony, to wave to the crowds that had lined below.

The Princess Elizabeth wore an ivory duchesse satin Norman Hartnell gown (inspired by Botticelli’s Primavera and paid for with clothing ration coupons) with a silk tulle veil, Queen Mary’s Fringe Tiara (which snapped that morning and was hurriedly fixed by the Court Jeweller), the Queen Anne and Queen Caroline Pearls (which were on display with other presents at St James’ Palace and had to be brought by an aide, who commandeered the King of Norway’s limo through the crowds outside, and then fought with the guards at St. James’ to allow him to take the valuable jewels), and the Duchess of Teck Earrings. The bouquet was lost sometime during the day, and the couple posed for photographs without it. However, after the missing bouquet was discovered, the bride and groom were called back to Buckingham Palace from their honeymoon, donned their outfits and posed with the bouquet. The Duke of Edinburgh wore Naval Uniform (which he can still fit into) with the Star of the Order of the Garter and the Star of the Greek Order of the Redeemer.

The Queen wore the Sapphire Chrysanthemum Brooch worn on her honeymoon and her 60th Anniversary!… twitter.com/i/web/status/1…