Today marks the Anniversary of the Deaths of Queen Emma of the Netherlands and her granddaughter, Queen Juliana of the Netherlands, so to mark the day, we are featuring one of the most prominent heirlooms of the Dutch Royal Family, which has been worn by six Generations of Queens and Crown Princesses: The Dutch Mellerio Ruby Parure! 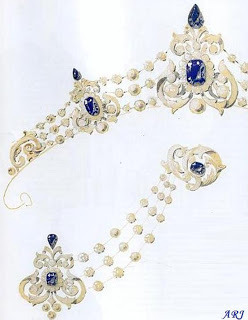 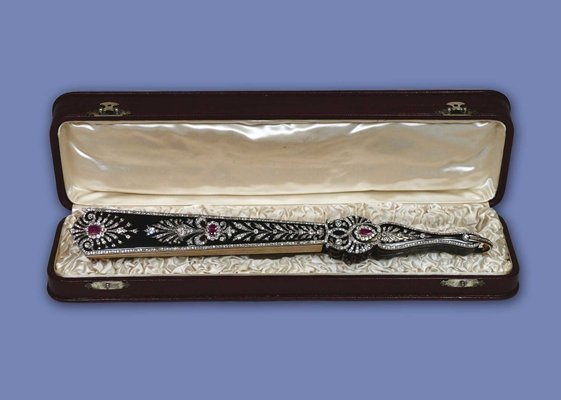 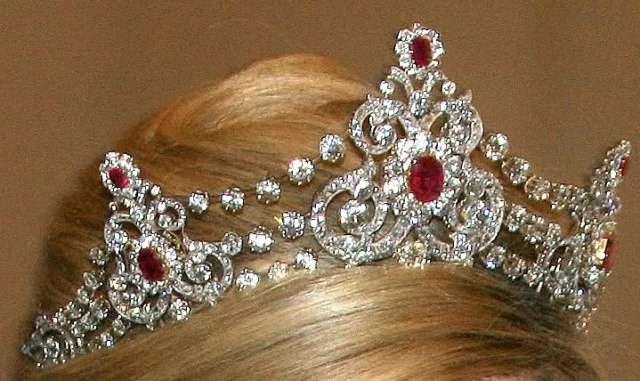 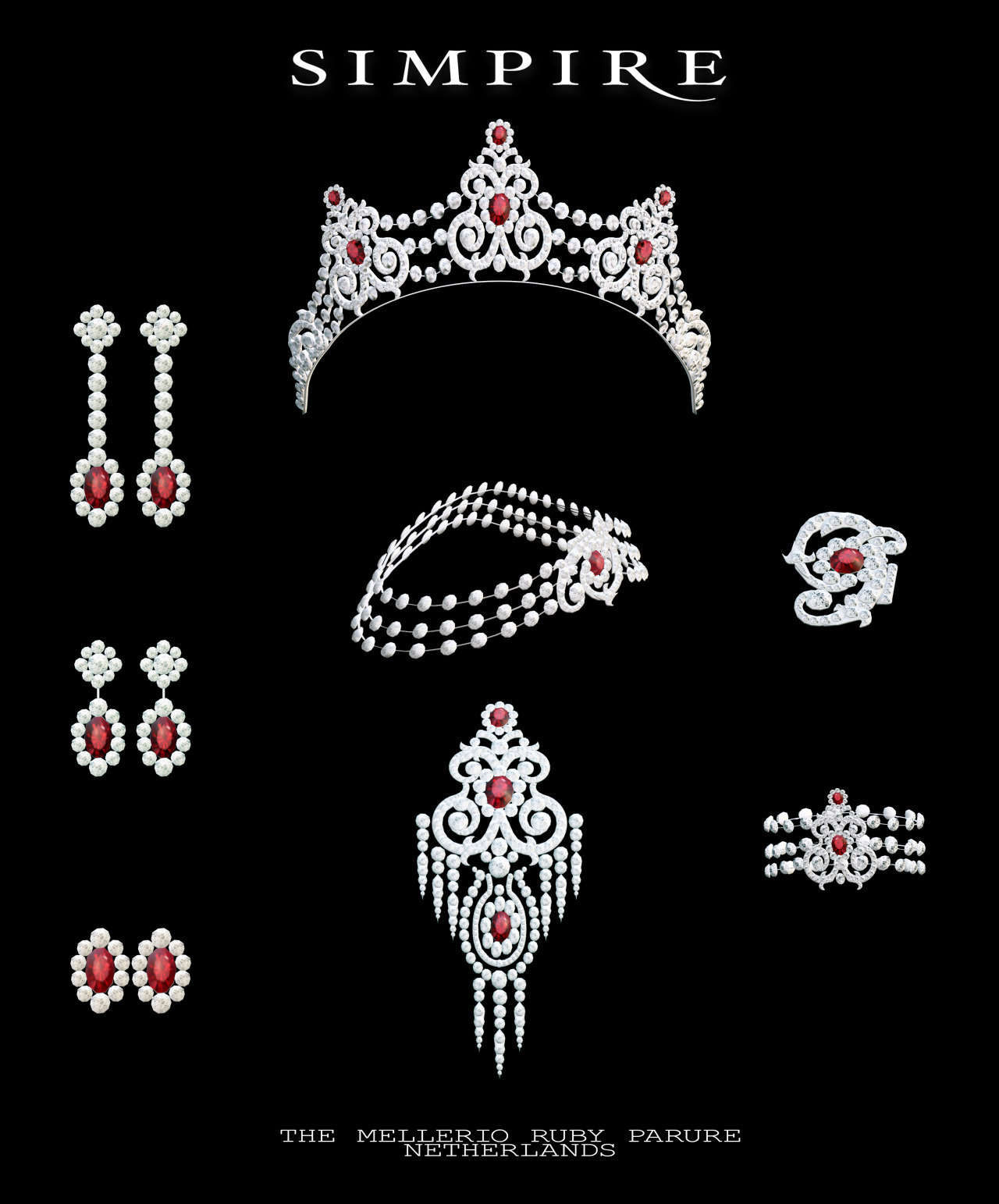 The spectacular Parure was ordered by King Willem III as a 30th Birthday Gift for Queen Emma from the celebrated French Jeweller Mellerio dits Meller in 1888, and designed by the fames Oscar Massin, for the then extraordinary sum of 160,000 guilders. The first order for the Parure, which was supposed to contain sapphires, was originally for a tiara, necklace, bracelet, and fan, that would use over 961 precious stones, but before completion, the necklace was thought to be too bulky, so the stomacher was created, along with another brooch.  Now the substantial parure is composed of the Tiara, a pair of versatile earrings, necklace, bracelet, stomacher, brooch, and the fan. Additionally, many of the Mellerio Ruby pieces are worn with pieces from the Dutch Ruby Peacock Parure, providing lots of splendid variety. The Mellerio Mellerio Tiara is the fourth most substantial Tiara of the massive Dutch Royal Collection, after the Stuart Tiara, the Dutch Sapphire Tiara, and the Württemberg Ornate Pearl Tiara, thus it has only ever been worn by Queens and Crown Princesses (future Queens)

Unfortunately, King Willem III passed away the year after the Mellerio Ruby Parure was delivered, and Queen Emma became the Queen Regent for their daughter, Queen Wilhelmina, wearing the Tiara for a portrait in 1891 with diamonds in place of the rubies to accommodate mourning. Queen Emma continued to wear the Mellerio Ruby Parure for numerous events and portraits until the end of her life, utilizing its versatility to get maximum usage. 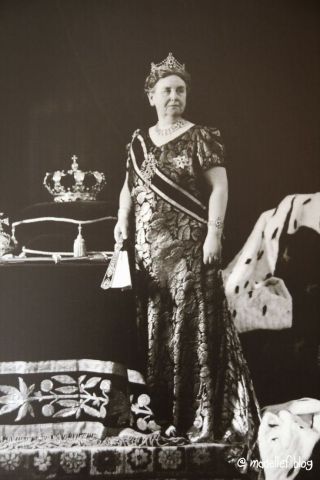 Queen Wilhelmina did not inherit the Mellerio Ruby Parure until the death of Queen Emma in 1934, hence why she acquired her own Ruby Peacock Parure, and thus only wore it for a handful of appearences in the late 1930s, most notably for the Wedding Gala of Crown Princess Juliana of the Netherlands and Prince Bernhard of Lippe-Biesterfeld in 1937 and in portraits taken for her Golden Jubilee in 1940.

#RoyalFlashback | The Dutch Royal Family host a State Banquet at the Royal Palace of Amsterdam during King Bhumibol… twitter.com/i/web/status/1… 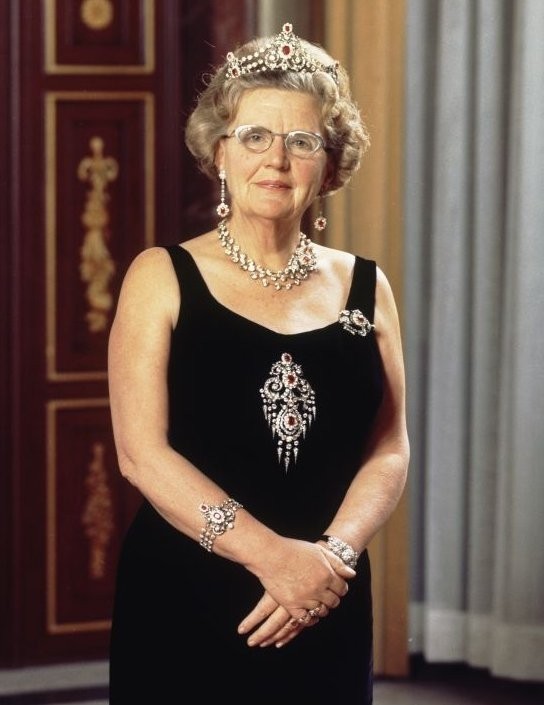 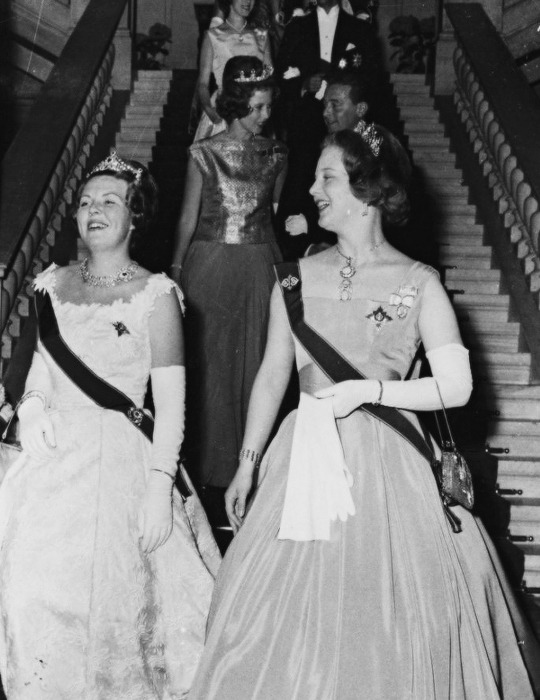 Queen Beatrix and Prince Claus' State Visit to Germany in 1982! Learn about the previous Dutch State Visits to Ger… twitter.com/i/web/status/1…

Princess Beatrix began wearing the Mellerio Ruby Parure when she was the Crown Princess (reflecting the important status of the jewels), with a notable appearance at the Wedding Ball of Prince Juan Carlos of Spain and Princess Sophia of Greece in 1962. The Tiara was not worn to often after becoming Queen, and after an appearance on the Dutch State Visit to Germany in 1982, the tiara itself did not appear until the mid-2000s, when it was worn for a few State Visits and also for the Wedding of Crown Princess Victoria of Sweden in 2010. The Tiara was last worn by Queen Beatrix on a State Visit to Oman in 2012.

While the Tiara has not been worn by any other ladies of the Dutch Royal Family except current/future Queens, as part of the Orange-Nassau Family Foundation, pieces of the Mellerio Ruby Parure were worn by Princess Margriet in the 1980s and Princess Laurentien wore the necklace, earrings and brooch for the Dutch-Danish dinner during the Hans Christian Andersen Bicentenary in Denmark in 2005. Two years later, Princess Mabel wore the necklace and earrings for King Harald V of Norway’s 70th Birthday Banquet. 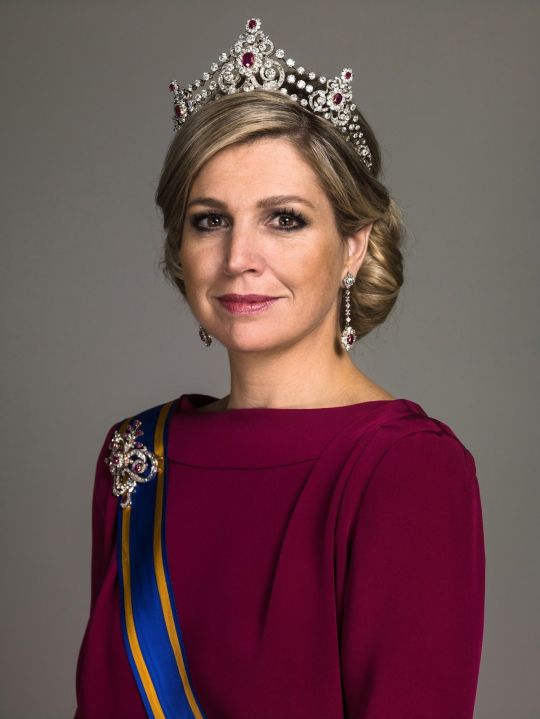 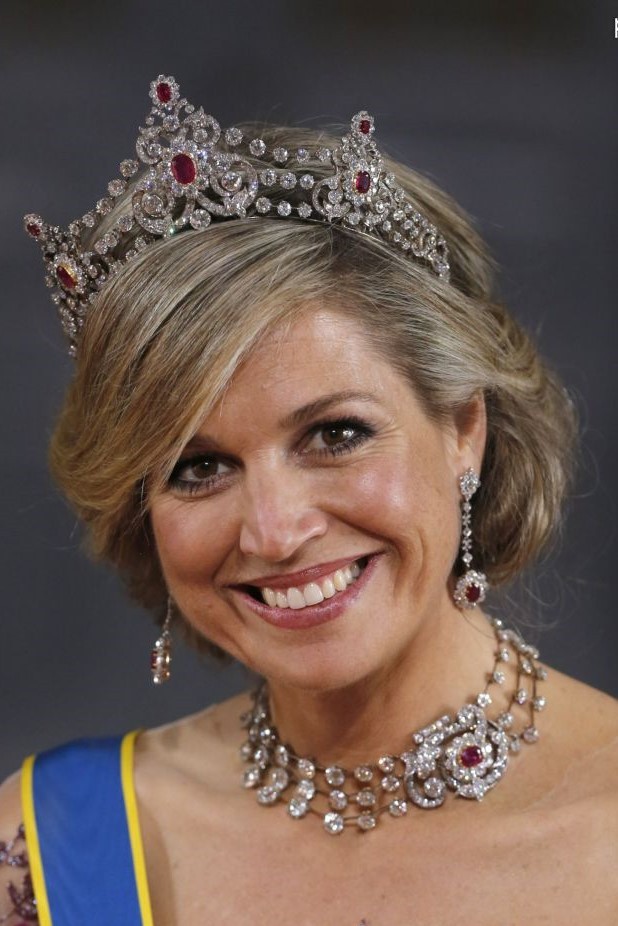 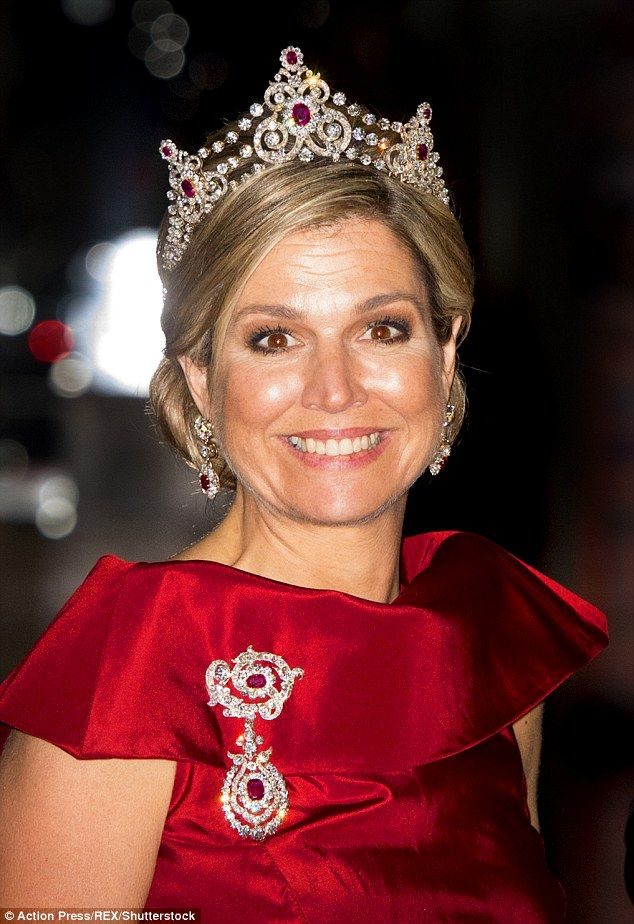 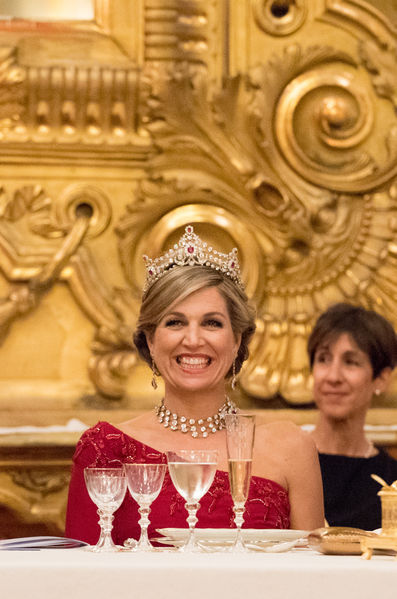 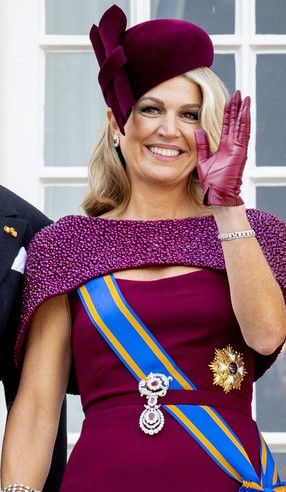 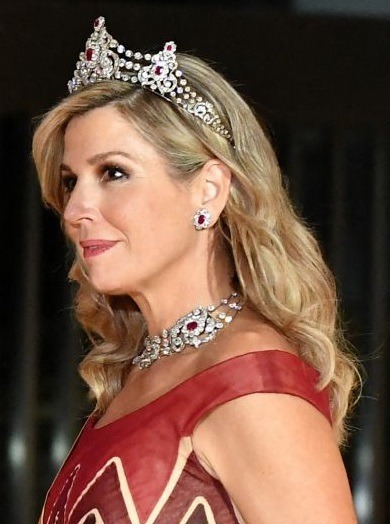 Queen Máxima began wearing the Mellerio Ruby Parure when still Crown Princess, first at King Carl XVI Gustaf’s 60th Birthday in 2006 and for the Wedding Gala of Hereditary Grand Duke Guillaume and Countess Stephanie de Lannoy in 2012. The Mellerio Ruby Tiara was worn in the portraits released to mark the Inauguration of King Willem-Alexander in 2013, and the Parure has become one of Queen Máxima’s favourites in the years since, having been worn at the Gala Dinner for the Diplomatic Corps in 2014 and in 2016, the Wedding of Prince Carl Philip of Sweden in 2015, the Belgian State Visit to the Netherlands in 2016, the Dutch State Visit to Italy and the Dutch State Visit to Portugal in 2017, Prinsjesdag in 2019, and for Emperor Naruhito’s Enthronement Banquet in 2019.

Continuing the family tradition of only current and future Queens wearing the Tiara, the Mellerio Ruby Tiara was the first to be worn by the Princess of Orange, who tried it on in 2012, at the age of 8, while her mother was getting dressed, talking about it for her 18th Birthday:

Yaaaa! I love tiaras. Show me a tiara, and I’ll know where it came from. I can recognize all the tiaras of Europe. I used to put them on from my mother. Then there would be one on her make-up table and I would have it directly on my head. I really liked to be in my mother’s jewelry anyway. When I was very little. She was preparing for an important dinner and she shouted around the house, “Amalia, where’s that ring?”

There is no doubt we will continue to see this splendid Royal Heirloom for years to come!