King Willem-Alexander and Queen Máxima of The Netherlands are embarking on their first State Visit to Indonesia, a former Dutch Colony next week, and to mark the visit, we are featuring our usual look at previous State Visits, as well as feature some Dutch Royal Jewels with Indonesian connections.

There were no major Royal Visits during the colonial era, despite the then Crown Princess Juliana’s fascination with the country, because she was prevented from travelling by Queen Wilhelmina, who feared for the safety of her only heir, especially after the death of Queen Astrid of Norway. Queen Juliana granted independence to Indonesia in 1949, but her first visit to the country came in 1971, when she and Prince Bernhard were hosted by President Suharto for a varied visit around the country. The couple returned to Indonesia in 1981, a few months after her abdication, for a 3-week private visit hosted by the President.

Queen Beatrix, Prince Claus, and then Crown Prince Willem-Alexander were hosted by President Suharto on their State Visit to Indonesia in 1995, which was one of the most important and controversial of Queen Beatrix’s Reign. I was fortunate enough to see a set of Dutch pottery presented by the Royal Party to their Indonesian hosts at the Taman Mini Museum in Jakarta a few years ago. 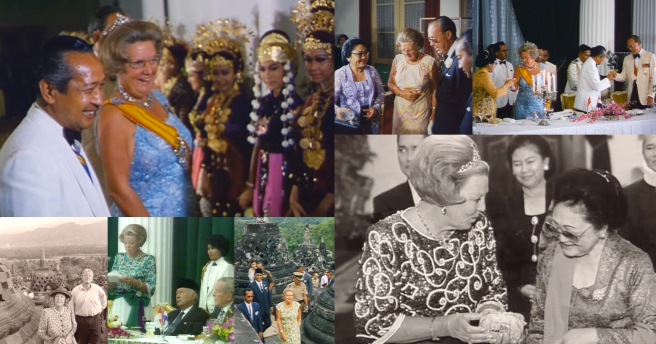 One thought on “Dutch Royal Visits to Indonesia ”