Today marks the 25th Anniversary of the Death of Infanta María Cristina of Spain, who died on this day in 1996! The youngest daughter of King Alfonso XIII and Queen Victoria Eugenie, who become Countess of Marone after her morganatic marriage, so 5o mark this occasion, we are featuring Queen Ena’s Spanish Cartier Tiara! 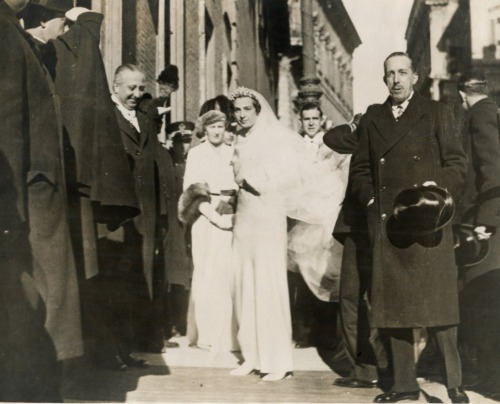 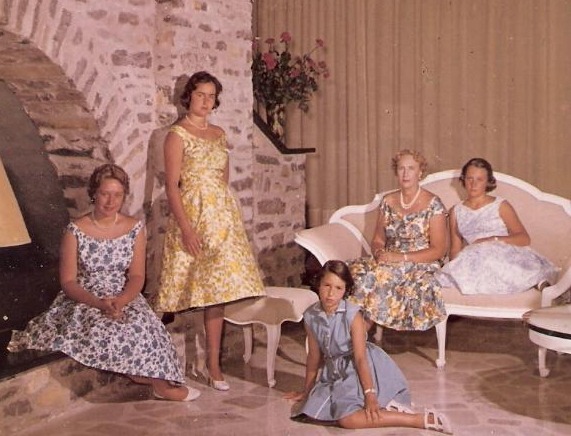 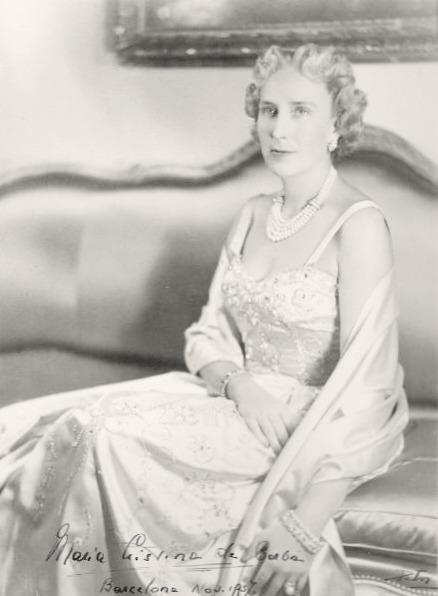 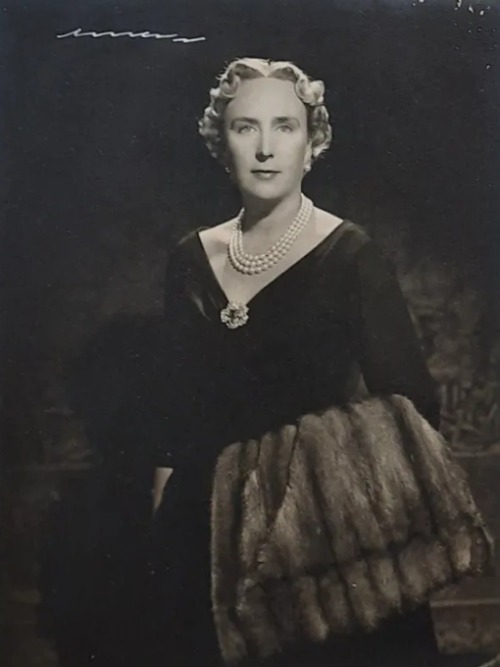 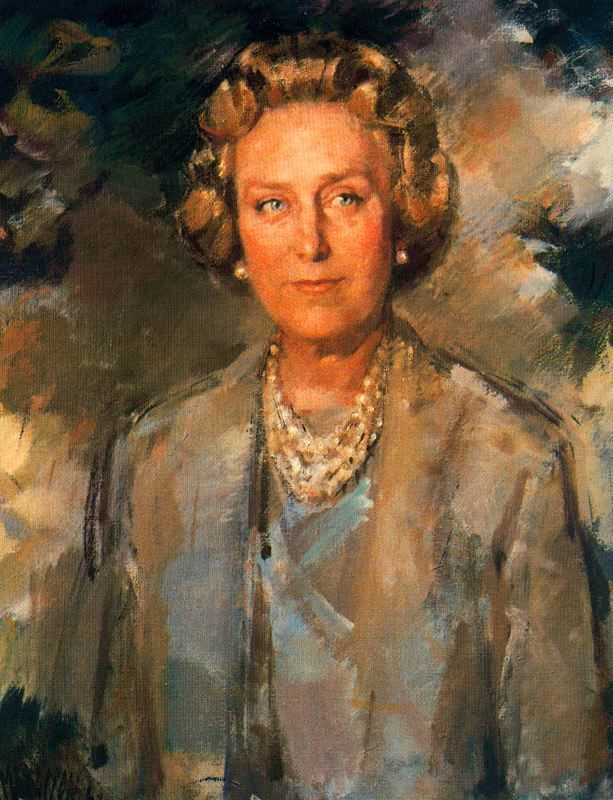 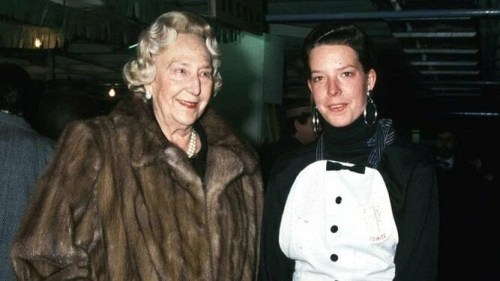 But first lets learn about Infanta María Cristina! The fourth child and second daughter of King Alfonso XIII and Queen Victoria Eugenie, named after her paternal grandmother, Queen Maria Cristina. In 1931, after the fall of the Spanish monarchy, and proclamation of the Second Republic, ‘Crista’ accompanied Alfonso XIII and the rest of the family into exile. When her parents separated, she stayed next to her father, first in Paris then in Rome. As an exiled Princess and possible carrier of the haemophilia, that her mother brought into the family, marriage prospects for ‘Crista’ were not forthcoming. For some time, she was thought as a good candidate to be the second wife of King Leopold III of the Belgians, and stepmother of the late Queen Astrid’s three children. However, she ended up morganatically marrying Enrico Marone Cinzano, an Italian businessman and industrialist, made Count Marone-Cinzano by King Victor Emanuel III ahead of the wedding. The couple had four daughters: Vittoria Eugenia, Giovanna, Maria Teresa and Anna Sandra. After the restoration of the Spanish monarchy, the Infanta divided her time between Torino and Madrid, where she bought a house. Maria Cristina died of heart attack during a family reunion at the residence of her sister-in-law, the Countess of Barcelona.

On the occasion of the marriage of King Alfonso XIII to Princess Victoria Eugenie of Battenberg in 1906, Queen Mother Maria Cristina commissioned Court Jeweller Ansorena to create a Louis XVI-inspired diamond and pearl tiara to be given as a wedding gift to her new daughter-in-law. She also gave her a six-strand pearl necklace with a pearl and diamond clasp. The (very tall) heart-shaped tiara was made up of eight oriental pearls and diamonds, stones sourced from the Queen’s jewellery collection, taken from various pairs of cufflinks, floral brooches, and buttons that were dismantled for this purpose.  The Queen Mother was quite reluctant to see her beloved son marrying Princess Ena, favouring a higher-ranking catholic-born candidate, preferably a Habsburg. Probably due to these harsh feelings, she wasn’t as generous on the wedding gifts as she was on the marriages of her two daughters, Infanta Maria de las Mercedes and Infanta Maria Teresa, who received several different parures from their mother. 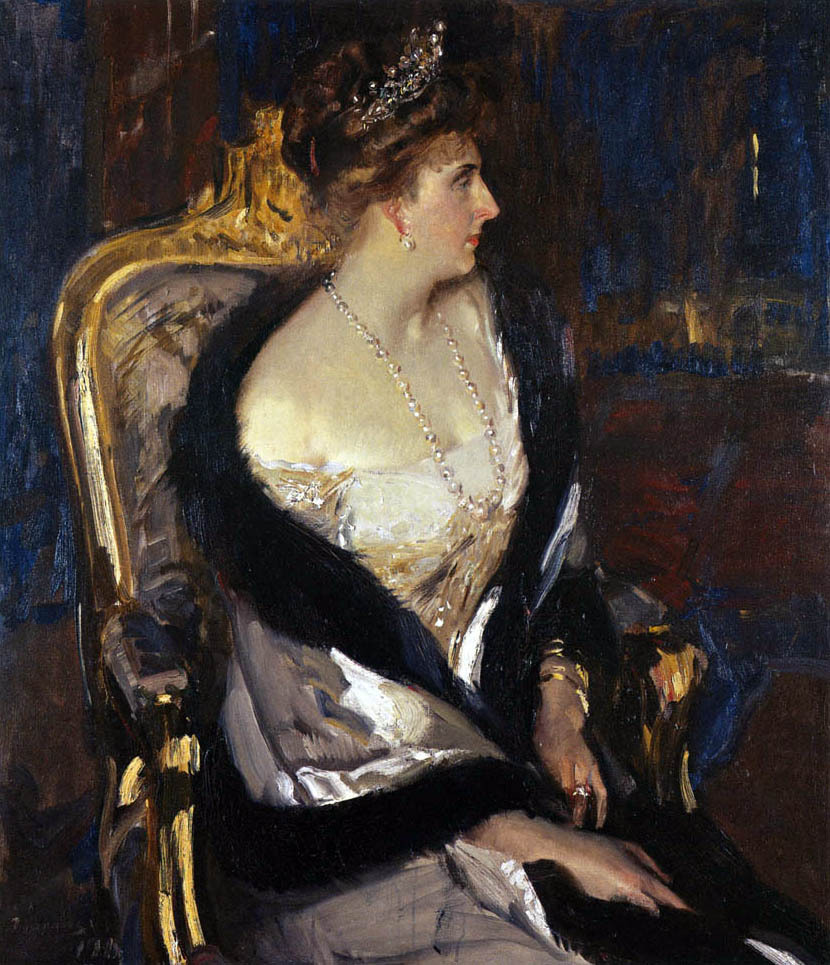 It seems that the now-Queen of Spain haven’t favoured this Diamond and Pearl Tiara much, as there are no available photographs of her wearing it. The famous impressionist/luminist painter Joaquín Sorolla portrayed Victoria Eugenie in 1911, wearing what could be the piece under question, although it is not clear enough. 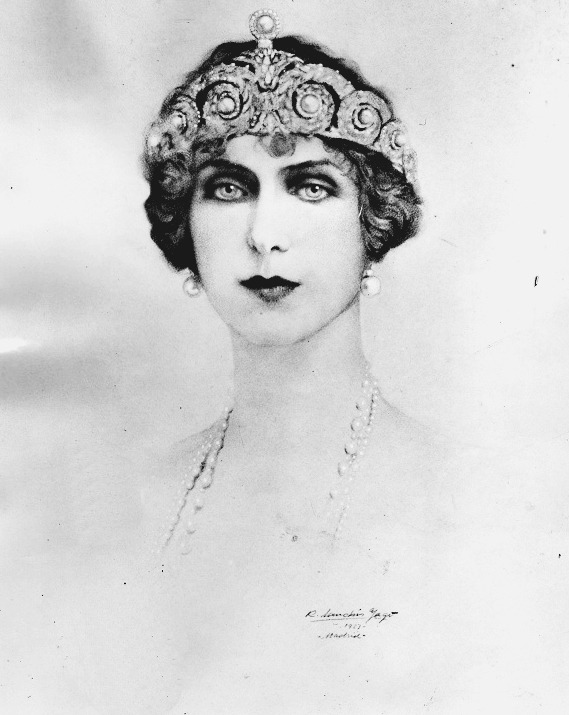 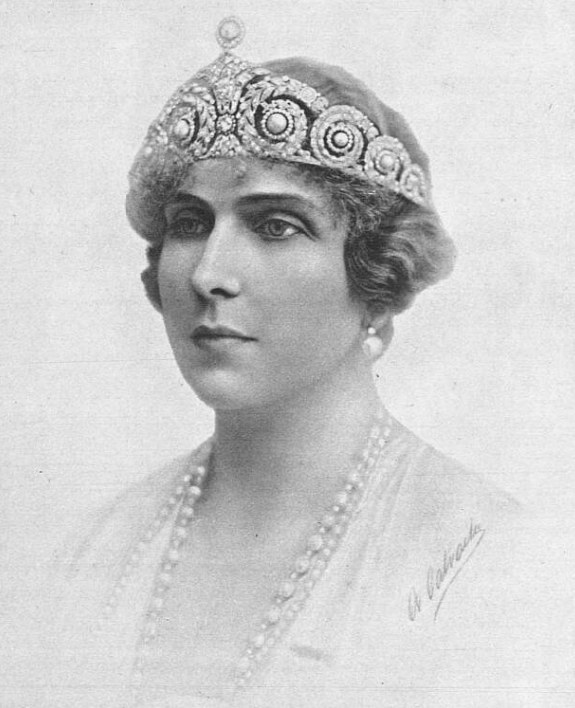 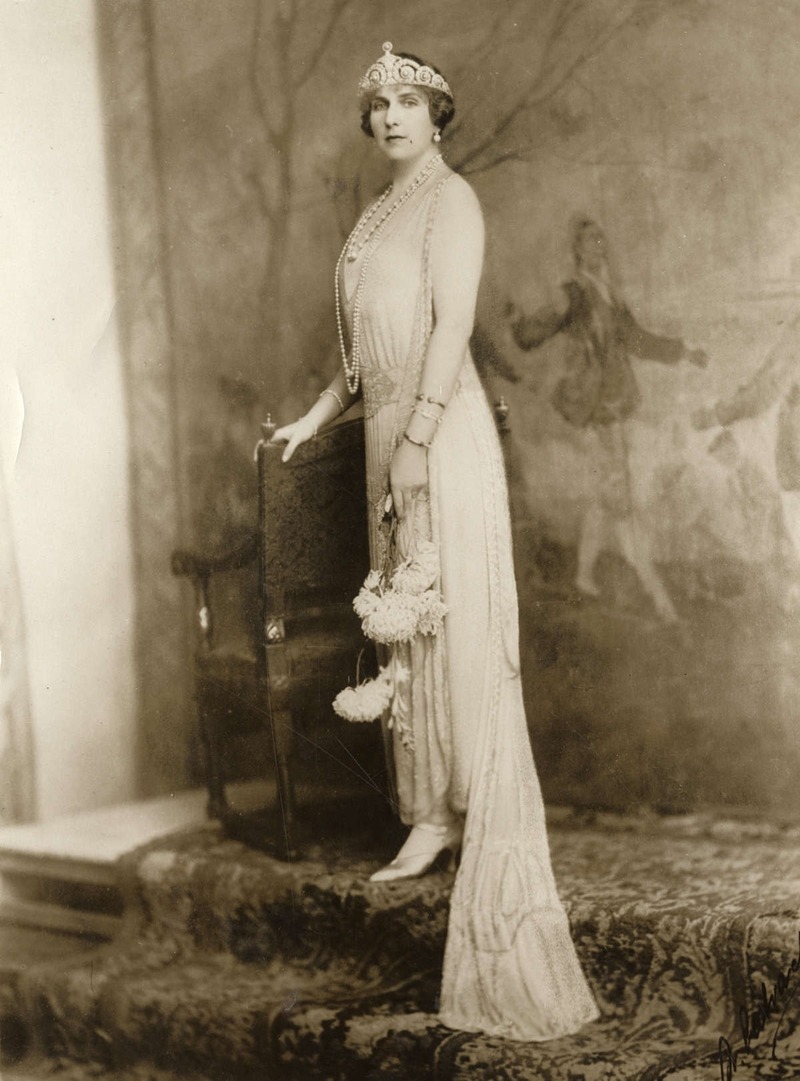 What is known is that at the beginning of the 1920s, Queen Ena took this tiara to Maison Cartier, her favourite jeweller, to be dismantled, so that a new piece would be created. Cartier delivered an Edwardian-inspired tiara, representing six diamond leaf elements, each one centred by a large button pearl, mounted in platinum. The piece culminated with a seventh button pearl set at the very top, and was worn by Queen Ena in a series of portraits in the early 1920s.

At a certain point, the Tiara was modified: the pearl set on the top was removed and two additional scrolls were added to the sides. By that time, Queen Victoria Eugenie also became the owner of a spectacular collection of rectangular Emeralds, inherited from her deceased Godmother, Empress Eugenie of France. The emeralds were set in a very fashionable sautoir, together with the Andean Emerald Cross. To create a full parure, a pair of earrings was commissioned, as well as some emerald bracelets. In addition, the eight button pearls set on the Cartier Tiara were also replaced by eight emeralds. 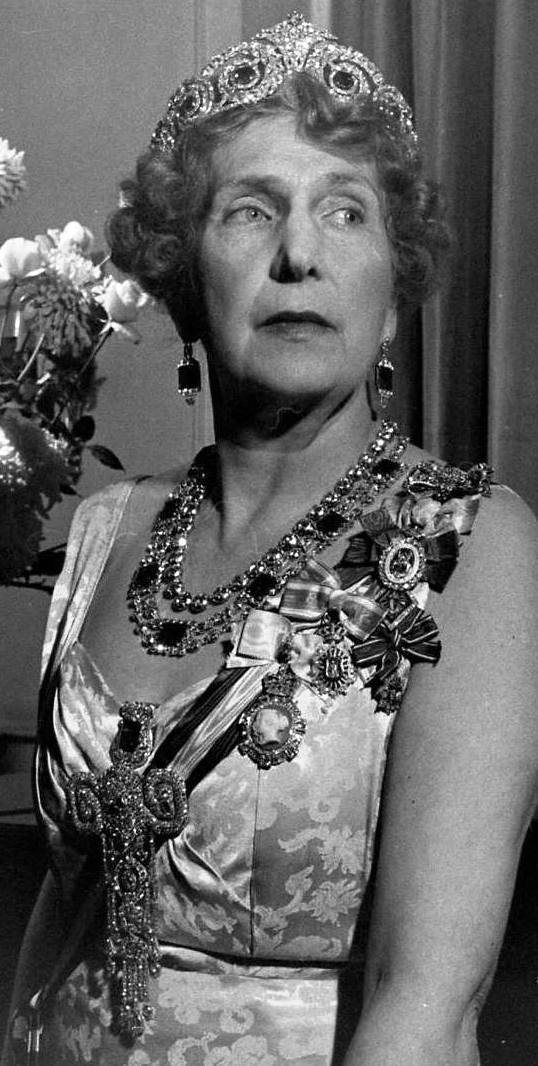 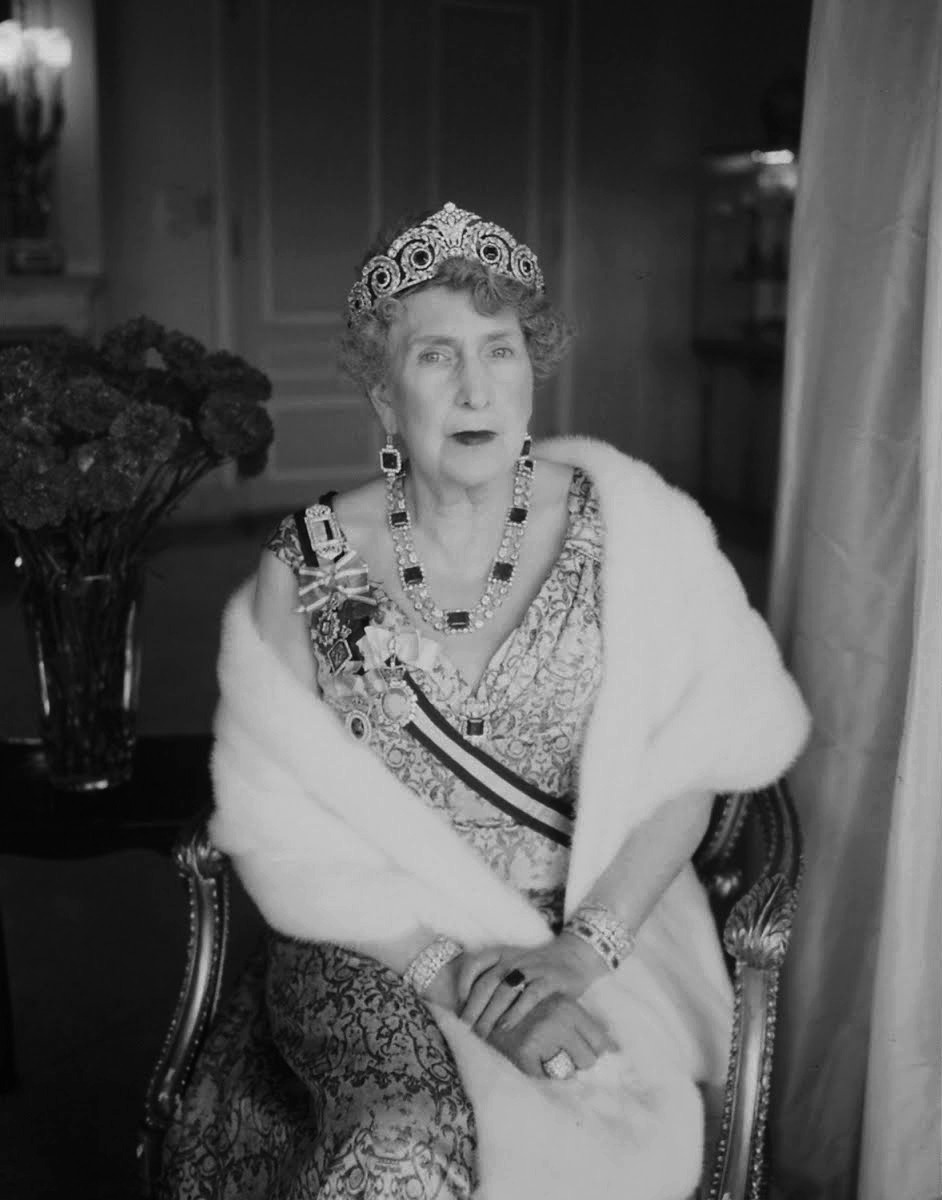 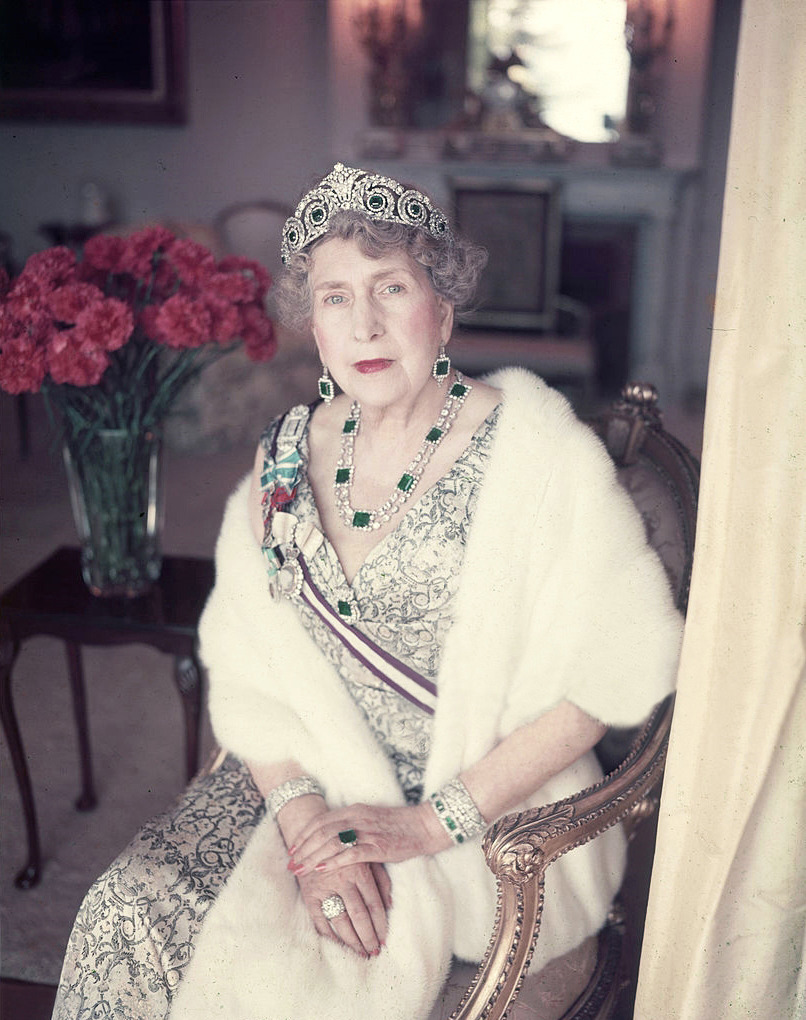 After the Spanish Royal Family went into exile in 1931, Queen Ena had to sell some of her jewels, in order to face her many expenses. However, she managed to retain the Emerald Parure. While staying at the Claridges Hotel in London for the Wedding of the now-Queen Elizabeth II and the Duke of Edinburgh in 1947, she posed for a series of iconic photographs for Life Magazine wearing her treasured emeralds. Some years later, in 1956, Nina Leen would again photograph the elder Queen and her emeralds for the same magazine, this time at Queen Ena’s home in Switzerland.

In 1953, Queen Victoria Eugenie loaned the Cartier Tiara to her sister-in-law, Irene Mountbatten, Marchioness of Carisbrooke, when she attended the Coronation of Queen Elizabeth II in Westminster Abbey. 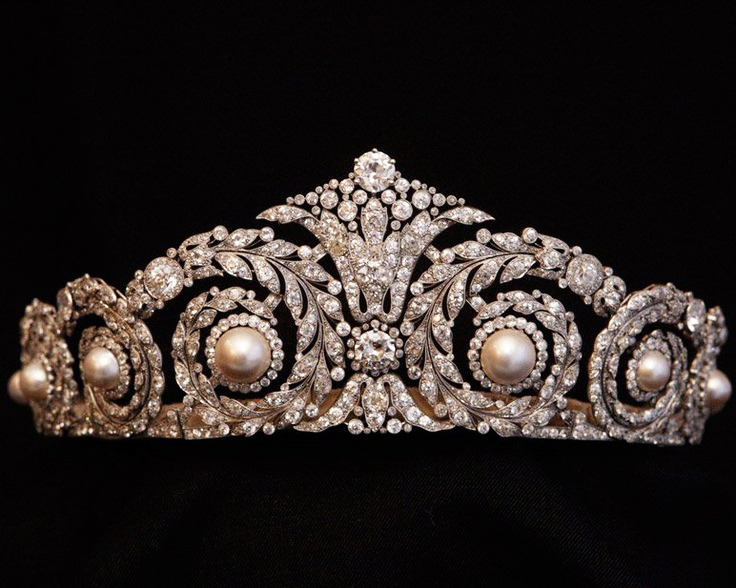 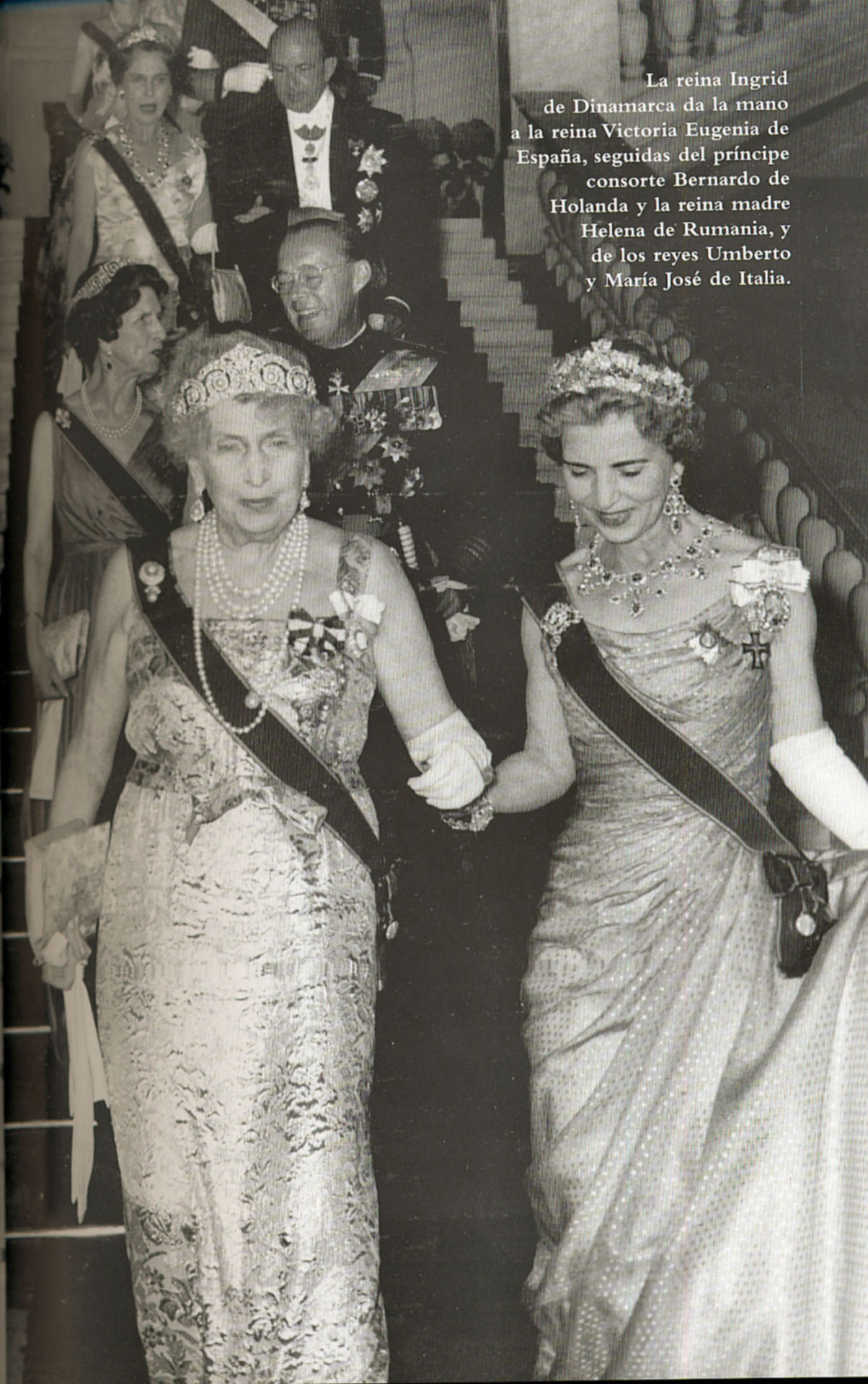 After the announcement of the Engagement of Prince Juan Carlos of Spain and Princess Sofia of Greece, Victoria Eugenie sold the emerald necklace, the brooch, and the ring at auction in Stucker Bern, in order to get funds for paying a part of the expenses of her grandson’s wedding the following year. By this time, the seven round emeralds set on the Cartier Tiara were again replaced by pearls. This pearl version was worn by Queen Ena at the Wedding Ball of Prince Juan Carlos and Princess Sofia at the Royal Palace of Athens in 1962 and during a formal visit to the Vatican. 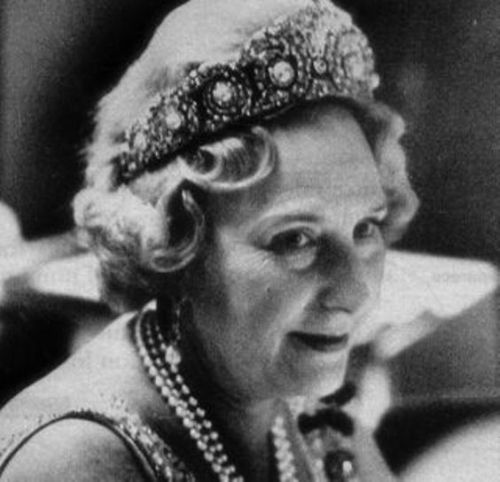 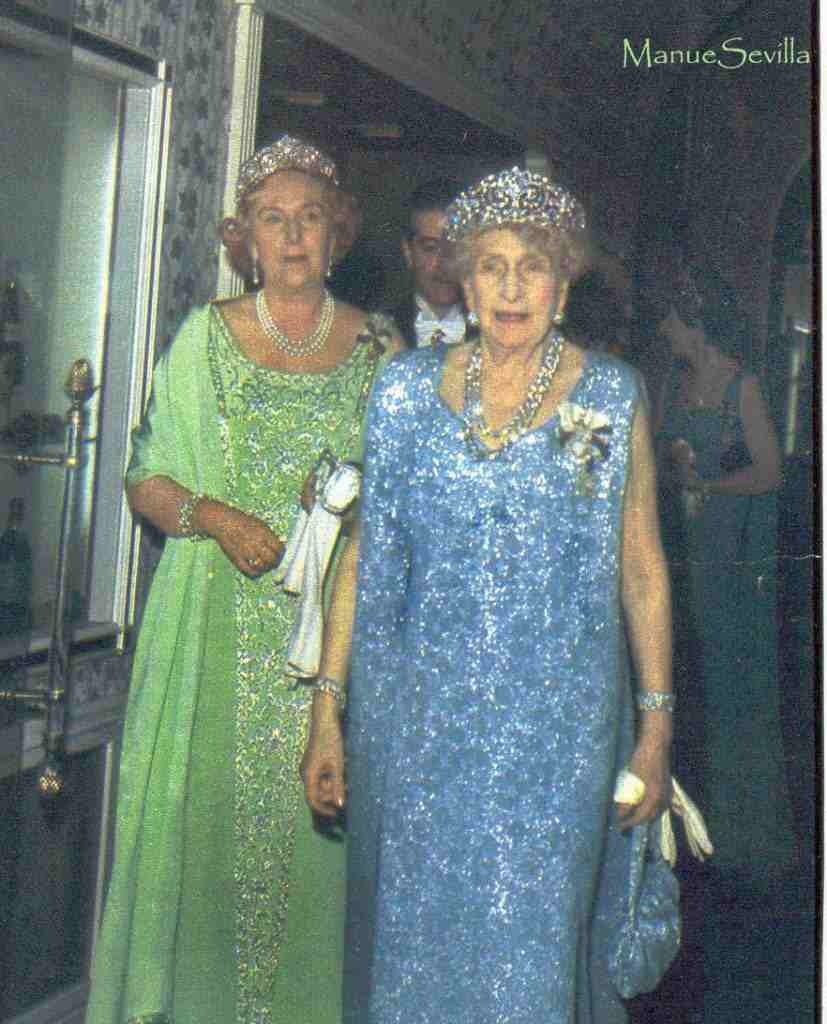 In 1967, the Queen loaned the Cartier Tiara to her daughter, Infanta Maria Cristina, for her to wear it at Infanta Pilar’s Wedding Ball in Estoril. The Infanta would inherit this tiara less than two years later, after her mother’s death. However, she felt that there was no need to keep tiaras at that stage of her life. After having dismantled her Mellerio Emerald Tiara to create more wearable pieces, she decided to sell the Cartier Tiara and the Chaumet Tiara, also part of her mother’s inheritance.

Fortunately, Infanta Maria Cristina firstly approached as possible buyers her nephew, King Juan Carlos of Spain and his wife, Queen Sofia. They ended up buying only the Cartier Tiara, because it was lighter and easier to wear. Queen Sofia wore the Cartier Tiara for the first time in public for State Visits to Thailand and Nepal in 1987.

To the surprise of many, Infanta Cristina borrowed the Cartier Tiara for the Wedding of Crown Princess Victoria of Sweden and Daniel Westling in 2010 in Stockholm. It was the first time this tiara was worn by other than Queen Sofia since it came into her possession, and it is thouhgt that it may have been a last minute swap with the Mellerio Shell Tiara worn by Queen Sofia. 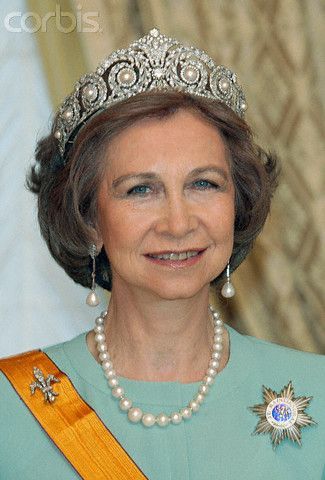 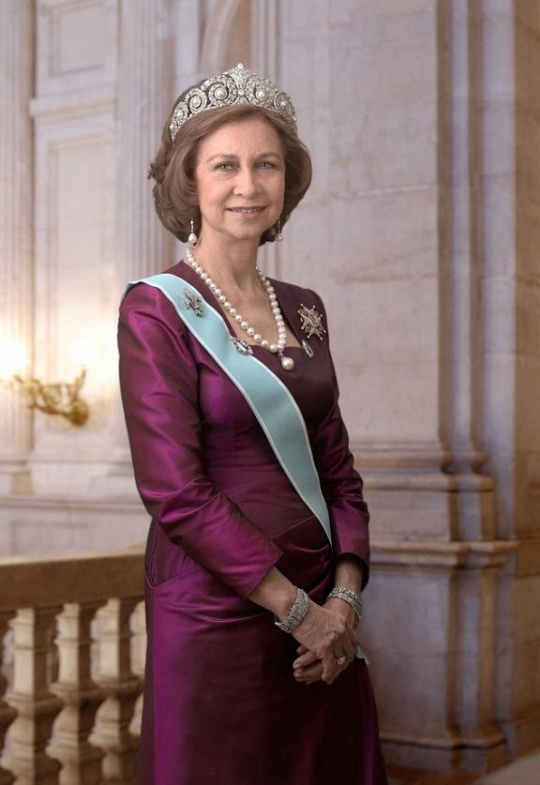 Queen Sofia has been worn Queen Ena’s Cartier Pearl Tiara extensively, both in Spain and abroad, most notably at the Wedding of Crown Prince Frederik of Denmark in 2004, and was also chosen for her last official portrait as Queen of Spain. In 2013, it was loaned for the “El Arte de Cartier” exhibition at the Thyssen Museum in Madrid. 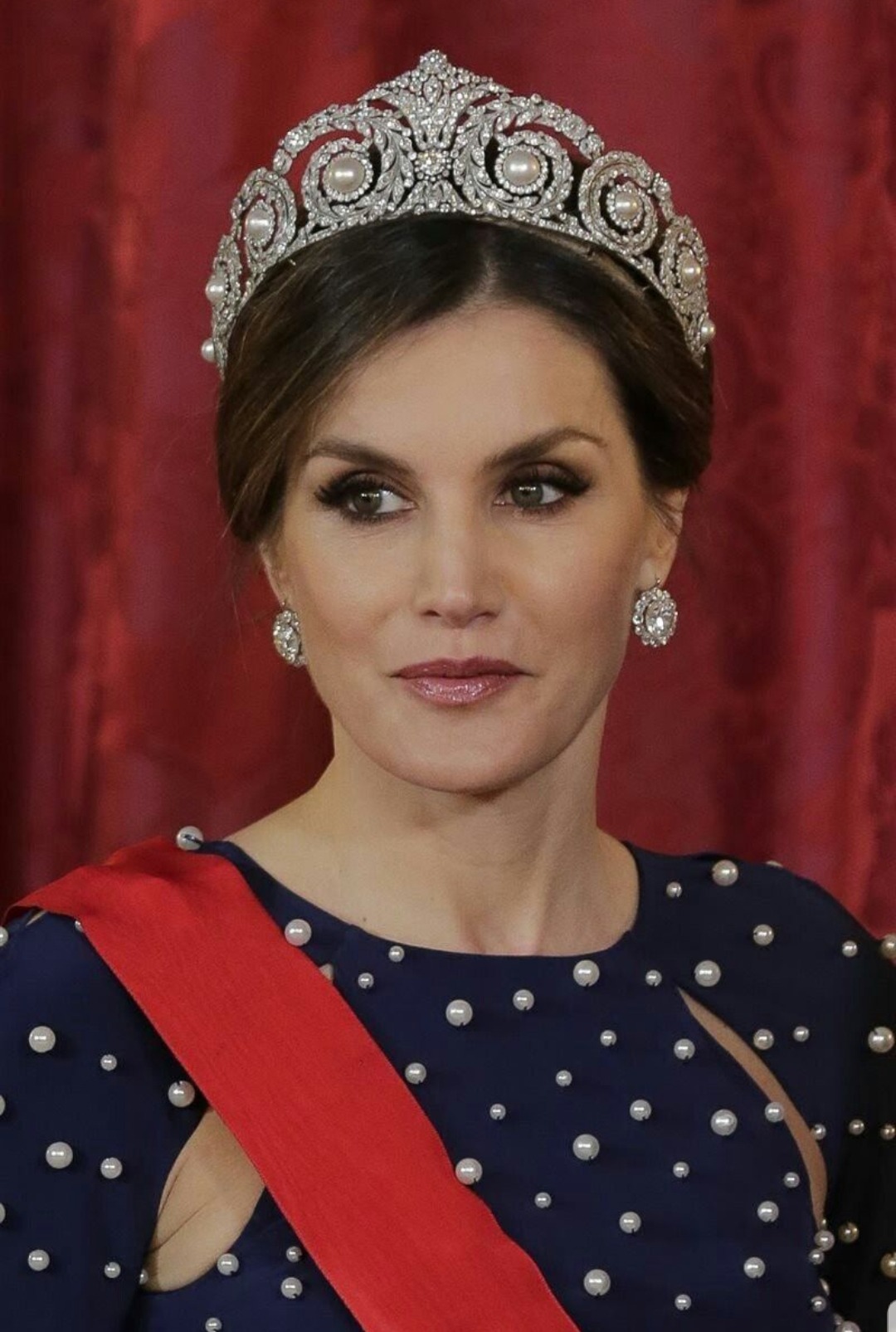 In 2018, Queen Letizia wore the Cartier Pearl Tiara tiara for the first time ever at a State Banquet held in honour of Portuguese President Marcelo Rebelo de Sousa on the occasion of his State Visit to Spain. There is no doubt we will continue to see it worn by the Queen, for years to come!