Today marks the Anniversary of the death of Princess Ingeborg of Sweden and Denmark, the Danish Princess who married a Swedish Prince, becoming the mother of Queen Astrid of Belgium, Crown Princess Martha of Norway, and Princess Margaretha of Denmark and the grandmother and great-grandmother of King Harald V of Norway, King Philippe of Belgium, and Grand Duke Henri of Luxembourg. To mark the day, we are featuring her lesser known Diamond Tiara!

Featuring a series of ornate diamond swags with a variety of diamond clusters, this Tiara seems to have been acquired by Princess Ingeborg in the early 1950s, when she had given her grand Emerald Parure to her daughter, Crown Princess Martha, and with only the Boucheron Pearl Circle Tiara and Turquoise Star Tiara, required other Tiara options. It was notably worn for the Wedding of her granddaughter, Princess Ragnhild of Norway, in 1953, and for the annual Nobel Prize Ceremony later that year.

Today is the 78th birthday of Queen Margrethe II of Denmark. 60 years ago, her 18th birthday was celebrated lavishl… twitter.com/i/web/status/9…

In the 1950s, Princess Ingeborg began loaning the Diamond Tiara to her granddaughter-in-law, Countess Ruth of Rosenborg, who wore the Tiara for a couple of official portraits in the 1950s (and a similar Tiara or a replica for the Wedding of Princess Ragnhild in 1953, thanks to the wonderful Regal Events), who inherited the Tiara and wore it at gala events well into the 1990s, most notably Queen Margrethe’s 18th Birthday Banquet, the Thai State Visit to Denmark in 1960, and the Confirmation Gala of Crown Prince Haakon of Norway in 1988. After Countess Ruth’s death in 2010, After her death in 2010, the Turquoise Star Tiara was inherited by her elder son, but Princess Viggo’s Opal Tiara, Princess Viggo’s Garnet Kokoshnik Tiara, and Princess Ingeborg’s Diamond Tiara were inherited by one of her other children, who have sold the Garnet Kokoshnik, but the others reportedly still remain with the family. Lets hope we get to see this family Heirloom worn again sometime soon! 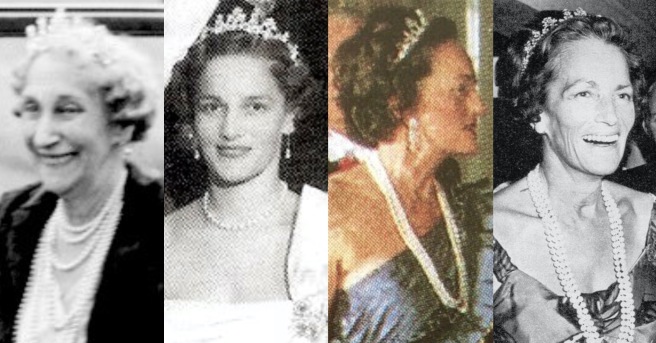