Today marks the 125th Anniversary of the Birth of Princess Viggo of Denmark, who was born on this day in 1895! AN American Heiress who married a Danish Prince and posed many grand jewels, to mark the anniversary, we are taking a look at one of Princess Viggo’s jewels that had an illustrious provenance, her Opal Tiara.

Originally consisting of an elaborate spray of cabochon opals in an Art Nouveau style, the Tiara originated from Princess Marie of Orléans, daughter of the Duke of Chartres and Princess Françoise of Orléans, who was married to Prince Valdemar of Denmark, a brother of the King Frederik VIII of Denmark, King George I of Greece, Queen Alexandra of the United Kingdom, and Empress Maria Feodorovna of Russia, in 1885. The couple had five children. Princess Marie was photographed wearing the Tiara in a series of official portraits along with an ornate Opal Choker, which still belongs to the Orléans Family.

After Princess Marie’s death at the age of 44 in 1909, her Opal Tiara passed to passed to her fourth and youngest son Prince Viggo, whose wife, the American-born Princess Viggo reset the piece into a more sedate Tiara with a necklace and a pair of earrings, which she notably wore for an Official Portrait and at King Christian X’s Silver Jubilee in 1937. The couple had no children and after Princess Viggo’s death in 1966, many of her Jewels, like her Garnet Kokoshnik Tiara, went to her nephew, Count Flemming of Rosenborg, while her Diamond Scroll Tiara was inherited by his brother, Prince George, a faux copy of the Diamond Scroll Tiara was inherited by another nephew, Count Christian of Rosenborg, and a Sapphire Parure was left to another niece, Queen Anne of Romania.

The Opal Tiara also went to Count Flemming and was worn by Countess Ruth at many prominent events in the years following, including the Wedding of Queen Margrethe of Denmark in 1967, the Wedding of King Harald of Norway in 1968 and King Frederik IX’s 70th Birthday in 1969, at which point the Tiara seems to have been left in the jewellery box as Countess Ruth preferred to wear Princess Viggo’s Garnet Kokoshnik Tiara or Princess Ingeborg’s Turquoise Star Tiara. After her death in 2010, the Opal Tiara and Parure were inherited by one of her sons, who have sold the Garnet Kokoshnik, but the other jewels reportedly still remain with the family. Lets hope we get to see this family Heirloom worn again sometime soon! 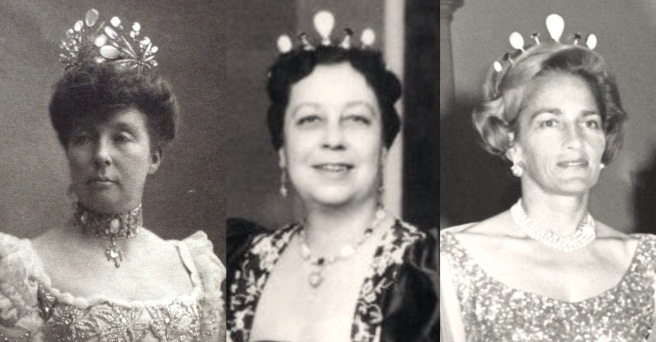