Happy Birthday to Queen Sofia of Spain, who turns 83 today! To mark her birthday, we are taking a look at another piece from the varied jewellery collection of the Greek Princess who became the very much respected first consort of the restored Spanish monarchy: the Montellano Diamond Earrings!

In 1962, on the occasion of their sumptuous wedding, Prince Juan Carlos of Spain and Princess Sophia of Greece were showered with a treasure trove of wedding gifts. Among them were many jewels given to the young Princess by family members, namely the Mellerio Shell Tiara, her Diamond Necklace and Infanta Isabel’s Pearl Bracelet, but also pieces given by authorities, members of nobility and family friends, such as her Niarchos Ruby Parure and Diamond Flower Brooch and this pair of diamond earrings. The Dukes of Montellano, Manuel Falcó y Escandón and Hilda Fernández de Córdoba y Mariátegui, presented the Princess with a spectacular pair of elongated diamond earrings from the XVIII century, featuring an intricate design that ends with three pear-shaped diamonds. Doña Sofia debuted the earrings publicly during her first formal visit to the Vatican as a married woman, while on honeymoon in Rome.

In the 60s and 70s, the Montellano Diamond Earrings were worn quite often by Sofia, for various social events, namely an evening gala accompanying Prince Rainier and Princess Grace of Monaco, as well as for various official engagements after Don Juan Carlos and Queen Sofia were created Prince and Princess of Spain.

After the couple’s proclamation as King and Queen of Spain, Queen Sofia took the Montellano Diamond Earrings with her on a State Visit to the Dominican Republic and the United States, their very first State Visit. Queen Sofia also famously wore the Diamond Earrings while she was portrayed by the Earl of Snowdon, Antony Armstrong-Jones, in the 1980s.

Maybe because her jewellery collection grew extensively and she acquired other options, and probably because the Montellano Diamond Earrings are very delicate due to their age, they become less and less worn. Queen Sofia wore the Earrings on a State Visit to Argentina in 1985, for a dinner with Fidel Castro in Cuba in 1999, and (for the last time publicly) during a banquet at the Royal Palace of Madrid held in honour of  King Abdullah and Queen Rania of Jordan on that same year. 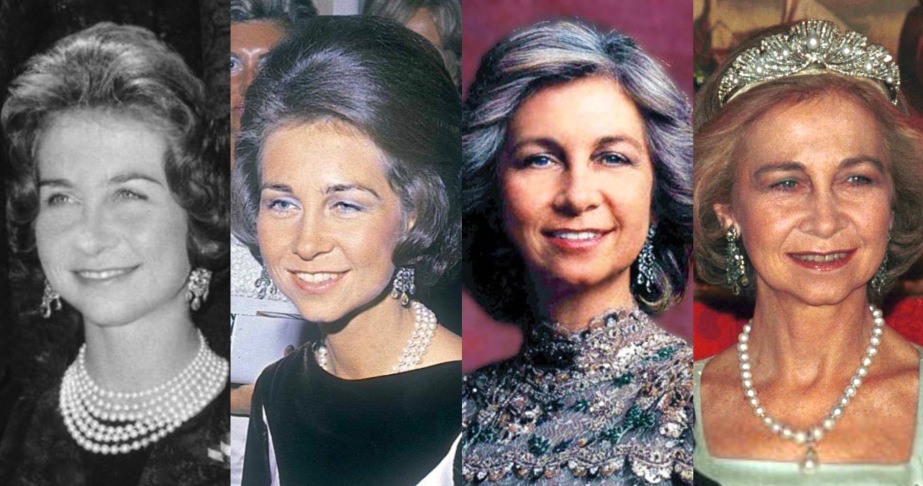