Today marks the 130th Anniversary of the Birth of Eileen, Duchess of Sutherland, who was born on this day in 1891! As the wife of one of the wealthiest British Aristocrats, the Duchess possessed some splendid jewels appropriate for a such a grand position, among the most splendid of which was her Belle Epoque Tiara:

The daughter of the 7th Earl of Lanesborough, Lady Eileen Gwladys Butler married the Marquess of Stafford in 1912, who succeeded his father as 5th Duke of Sutherland in 1913. The couple had no children, and during the First World War, the Duchess served as a Red Cross Nurse, and was later the Mistress of the Robes to Queen Mary between 1916 and 1920. One of the one of the richest landowning families in the United Kingdom, the Duke and Duchess resided between Dunrobin Castle in Scotland, Sutton Place in Surrey, and Thatched House Lodge in London (now the home of Princess Alexandra of Kent), with many other grand estates, including Trentham Hall and Stafford House, sold to diversify assets ahead of the First World War. Active in Society during the interwar years, after the outbreak of the Second World War, the Duke and Duchess retired to Dunrobin Castle in Scotland, where she suffered from asthma and passed away in 1943 at the age of 51.

An ornate pieces composed of diamonds arranged in a series of bows, the Tiara looks Art Deco in silhouette but is Belle Epoque in design. It may be a version of the Tiara worn by the 4th Duchess of Sutherland when she was a Canopy Bearer at the Coronation of King George V in 1911, which was displayed:

In the tiara to be worn by the Duchess of Sutherland, one of the four canopy duchesses, large pearls intersect the compact lines of diamonds which form a geometric design of semi-circles, lying against a band of diamonds. Pear-shaped pearls are introduced to give height to the tiara.

The Duchess of Sutherland wearing her Belle Epoque Diamond Tiara at the State Opening of Parliament in 1934! Learn… twitter.com/i/web/status/1…

The 5th Duchess was the Mistress of the Robes to Queen Mary between 1916 and 1920, when the Duchess of Devonshire was the Viceregal Consort in Canada, and likely wore the Tiara to a few Court Occasions, though not as many as usual since there was austerity during the First World War. The Duchess was first pictured wearing the Tiara attending a Carnival Ball with the Prince of Wales (a great friend of the Duke) and Lady Ednam in 1925. The Duchess was also seen in the Tiara at the 1934 State Opening of Parliament. 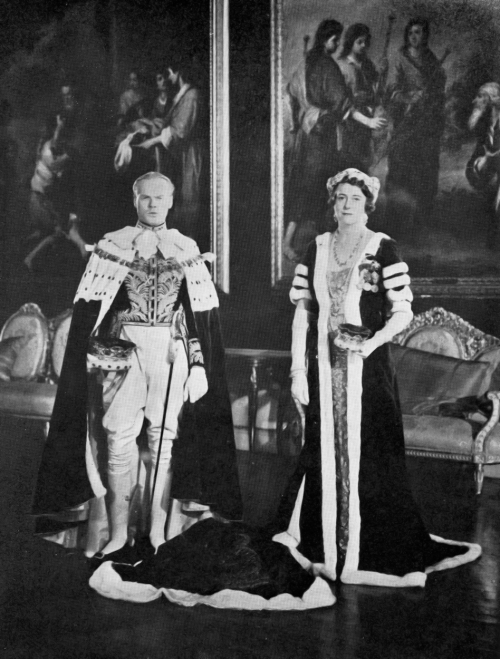 In 1937, the Duchess wore the Belle Epoque Diamond Tiara for the Coronation of King George VI and Queen Elizabeth, The Duke was the first Chairman of the British Film Institute, and both the Duke and Duchess were filmed in technicolour during the Coronation festivities. The Duchess also wore the Tiara for a Coronation Ball hosted by the couple at Hampden House, the first Ball at a private House attended by the reigning King and Queen since 1914.

The Duchess continued to wear her Tiara for a series of events and festivities over the next few years, including a Gala Concert at Austrian Legation in London in 1937 (at which Dame Margaret Greville wore the Greville Emerald Tiara), and a portrait by Cecil Beaton in the late 1930s, both times pairing the Tiara with a long Diamond Rivière composed of massive Diamonds which were given to the 1st Duchess, wife of the then British Ambassador to France, by Queen Marie Antoinette when she was arrested. After the outbreak of WWII, the Duchess presumably put the Tiara away and the couple retired to Dunrobin Castle in Scotland, where she passed away in 1943.

The following year, the Duke remarried to Clare Josephine O’Brian, who was pictured wearing portions of the Tiara as brooches at the Ciros Club in 1948, and wore the Tiara as a stomacher with another Tiara (that had also been worn by the previous Duchess) at an event in 1950, likely the State Opening of Parliament. Just a few weeks later, there was a theft of £53,135 worth of Jewelry from Sutton Place.

Many of the missing pieces are Sutherland Heirlooms. They include the famous Marie Antoinette Jewels which had have been in the family for 150 years.”

However, the culprits, a former secretary and commission agent, were sentenced a few years later, and presumably most of the Jewels were returned. There was another theft in 1953, just two days before the Coronation of the Queen, when £50,000 worth of Jewelry was stolen from their house in Wilton Crescent, though the thieves left the Ducal Coronets which allowed the Duke and Duchess to be ‘properly attired’ at the Coronation. There was another theft from their home in Jamaica in 1954, with £1,800 worth of Jewelry stolen, among them a pair of diamond earrings. The fate of the Belle Epoque Diamond Tiara is unknown as there are few pictures of the Duchess in grand jewels after the early 1950s, but it is likely that it was a victim to the aforementioned thefts. 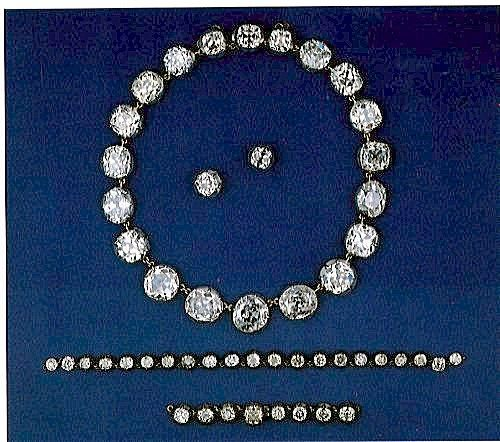 One of the jewels that appears to have survived the thefts was the Diamond Rivière with Marie Antoinette’s Diamonds, which was exhibited multiple times by the Duke and Duchess througout the 1950s and 1960s, and also worn by the Duchess, in two rows, at the Henley Polo Club Ball at Ciro’s Club in 1951.

#RoyalJewelsatAuction | Objects from the Estate of the Rt Hon The Countess of Sutherland on Auction at the Sotheby’… twitter.com/i/web/status/1…

After the Duke’s death in 1963, his titles were divided according to their patents: the Earldom of Sutherland and Lordship of Strathnaver passed to his niece, Elizabeth Sutherland, 24th Countess of Sutherland, while the remainder of the titles passed to the heir male, a distant relative, the Earl of Ellesmere. The Countess of Sutherland, who inherited the extensive family estates, also inherited the Diamond Rivière, and while some insignificant jewels have come up at Auction after her death in 2019, it appears the Rivière still remains with the current Earl.

4 thoughts on “Duchess of Sutherland’s Tiara”