Enthronements and Coronations mark the handing over of power from one generation to another, but in Spain on this day in 1975, the Enthronement of King Juan Carlos heralded the return of the Spanish Monarchy, more than 40 years after its abolishment.

General Franco died on November 20th, and on the 22nd, Juan Carlos was sworn in as the King of Spain at the Cortes Generales in Madrid. Accompanied by Queen Sofia and their three children, he delivered a speech to the assembly.

Afterwards, the family watched a Parade, and then the new King and Queen visited the lying-in-state of General Franco.

On November 27th,  a Mass of the Holy Spirit was celebrated at the San Jerónimo el Real Church in Madrid, held to inaugurate the new reign. 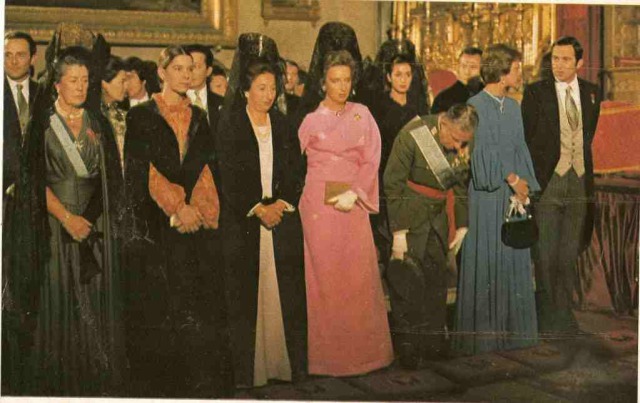 After the Mass, the new King and Queen rode through the streets of Madrid and then hosted a Diplomatic Reception at the Royal Palace of Madrid.

Late in the afternoon, King Juan Carlos and Queen Sofia appeared on the balcony of the Royal Palace of Madrid, to wave to the large crowds assembled underneath.