Today marks the 70th Anniversary of the Death of Queen Amélie of Portugal, who died on this day in 1951! The eldest daughter of Prince Philippe, Count of Paris and Infanta Marie Isabelle of Spain, Amélie was born in London, where her family was living in exile. In 1886, she married Dom Carlos, Prince Royal of Portugal. The couple had three children, Prince Luís Filipe, Infanta Maria Ana (who died right after birth), and Infante Manuel, succeeding to the throne in 1889. In 1908, the King and his heir, Luis Filipe, were assassinated at Terreiro do Paço square, which led to the accession of her younger son as King. Manuel II reigned for two years before the monarchy was abolished. Amélie lived the rest of her life in exile in Versailles, France. She outlived her son, who had no descendants. To mark the day, we are taking a look at her Emerald Parure!

In 1886, on the occasion of her marriage to Prince Dom Carlos, Princess Amelie received from her parents, the Count and Countess of Paris, a magnificent parure of emeralds and diamonds. The set consists of a tiara, a necklace, and three square brooches. Although it was never confirmed, it is speculated that the parure could have been a family heirloom, either from Amélie’s paternal or maternal family. Its execution is often attributed to Bapst or Laurent, both important French jewellers. 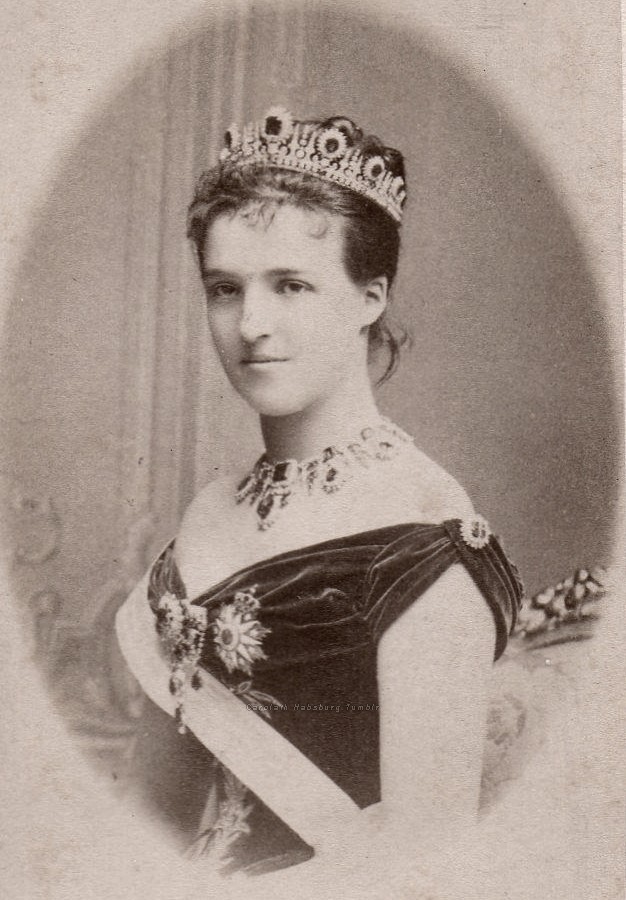 Princess Amélie started wearing her Emerald Parure right after her arrival in Portugal, debuting it at one of the galas held on the occasion of the marriage. She was photographed and portrayed wearing the emeralds on several occasions, both as Duchess of Bragança and later as Queen Consort. She often paired it with other jewels from her jewellery collection, such as the Duke of Aumale’s emerald brooch and her Diamond Fence Choker, as well as pieces from the Royal Treasury, namely the Diamond Rivières and Queen Maria Pia Star Tiara.

With the fall of the monarchy in 1910, the Royal Family rapidly left the country, leaving a major part of their possessions behind. Later, the republican government returned to the Queen her personal possessions, including her jewellery collection. As she remarked, “everything was returned, not even a small pin was missing”. In exile, the Queen still had opportunities to wear her Emerald Parure. She also adapted to the change of fashion, using the tiara as a bandeau.

#RoyalFlashback | Royal Guests and Relatives from around Europe at the Wedding of Count of Paris and Princess Isabe… twitter.com/i/web/status/1…

When the Queen died, in 1951, her jewels were inherited by several members of her French family and personal friends and staff, namely her three sisters, the Duchess of Aosta, the Duchess of Guise and Infanta Luisa of Spain, as well as her godson, Dom Duarte of Bragança, and some of her many nieces and nephews, like the Count of Paris, who as the head of the Orléans family, inherited the Emerald Parure.

The Count of Paris rapidly sold his aunt’s Emerald Parure at auction. From the only photograph available from the sale, we can see that the necklace has been altered, as the large central square emerald was removed, and a pair of earrings was created. The fate of the Parure remains unknown, some claim that it was, for some time, the property of a South American billionaire, who bought it somewhere in the 1950s and that it remains intact to this day in a ‘mysterious’ bank box.