Happy Birthday to Infanta Margarita, Duchess of Soria and Hernani, who turns 81 today! The younger sister of King Juan Carlos and the aunt of King Felipe, who was born blind, she has attended a plethora of glittering events over the decades, and to mark her birthday, we are taking a look at the Countess of Barcelona’s Pearl and Diamond Brooch!

Featuring a large central Pearl in a Diamond Bow, with a large Pearl pendant, the Brooch comes from Princess Louise of the Bourbon-Two Sicillies, who wore it when her daughter, Princess Maria de las Mercedes of the Bourbon Two Scicilies she married Infante Juan, Count of Barcelona, in 1935. The Pearl and Diamond Bow Brooch was inherited by the Countess of Barcelona who frequently wore it  with Queen Maria Christina’s Cartier Pearl Tiara, most notably for an official portrait and for the wedding of her son, the future King Juan Carlos and Princess Sophia of Greece in 1962.

After the Countess’ death in 2000, her Pearl and Diamond Bow Brooch was inherited by her younger daughter, Infanta Margarita, who first wore it to the Countess’ funeral in 2000, and has since worn the Brooch at a variety of important occasions, including the inauguration of King Felipe, when she received the Golden Medal of the National Royal Academy of Medicine, and most recently a to the funeral of her sister, Infanta Pilar, a few weeks ago. There is no doubt we will continue to see the Brooch for years to come. 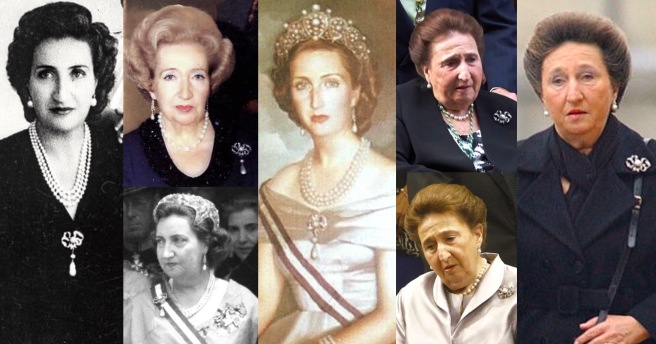