Happy Birthday to Infanta Cristina of Spain, who turns 57 today! The disgraced sister of King Felipe VI, the Infanta was a working member of the Spanish Royal family for almost three decades until she was set aside, due to her husband’s conviction for corruption. Throughout the years, Cristina amassed an interesting jewellery collection, with some heirloom jewels, namely her Grandmother’s Emerald Brooch, as well as some modern suites. To mark the day, we are featuring one of those modern acquisitions: the Sapphire Parure! 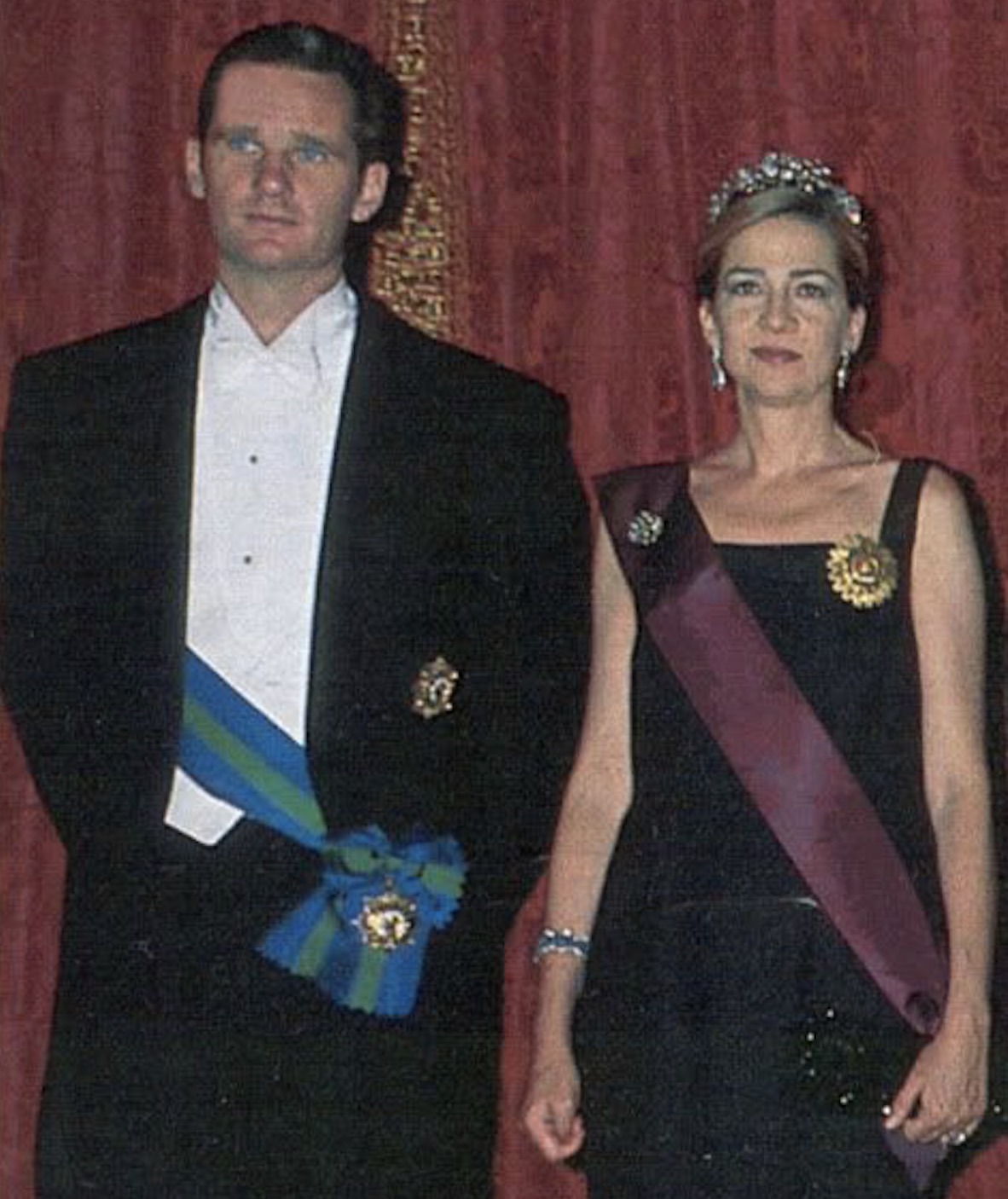 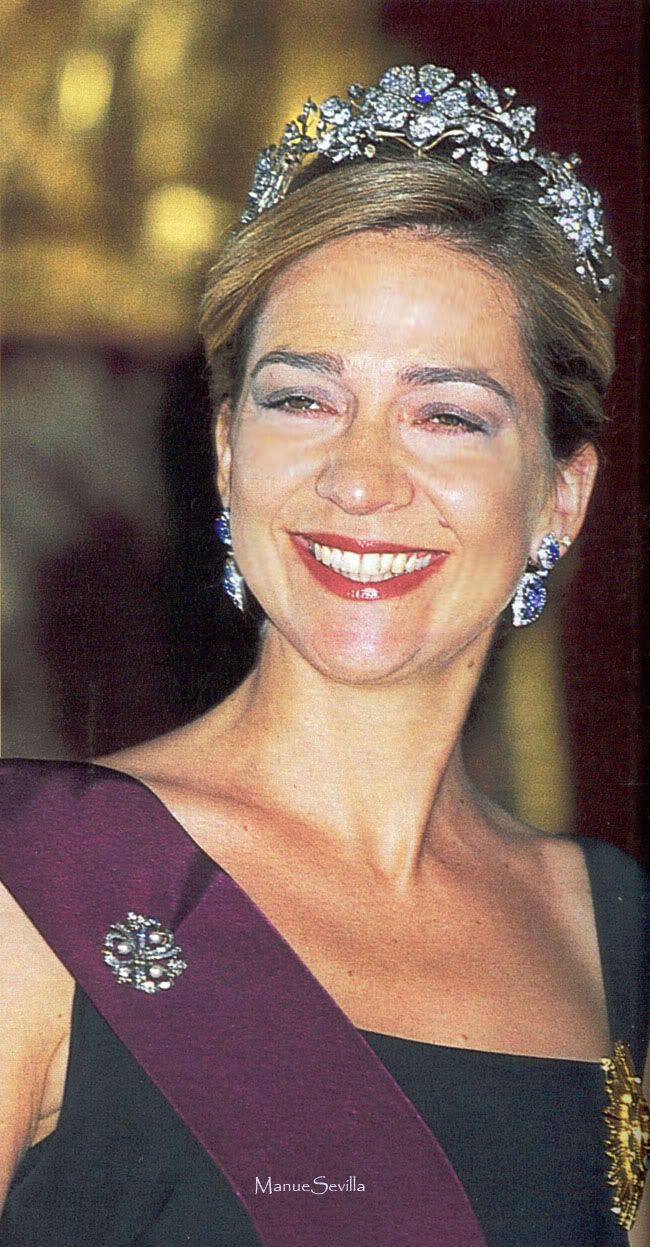 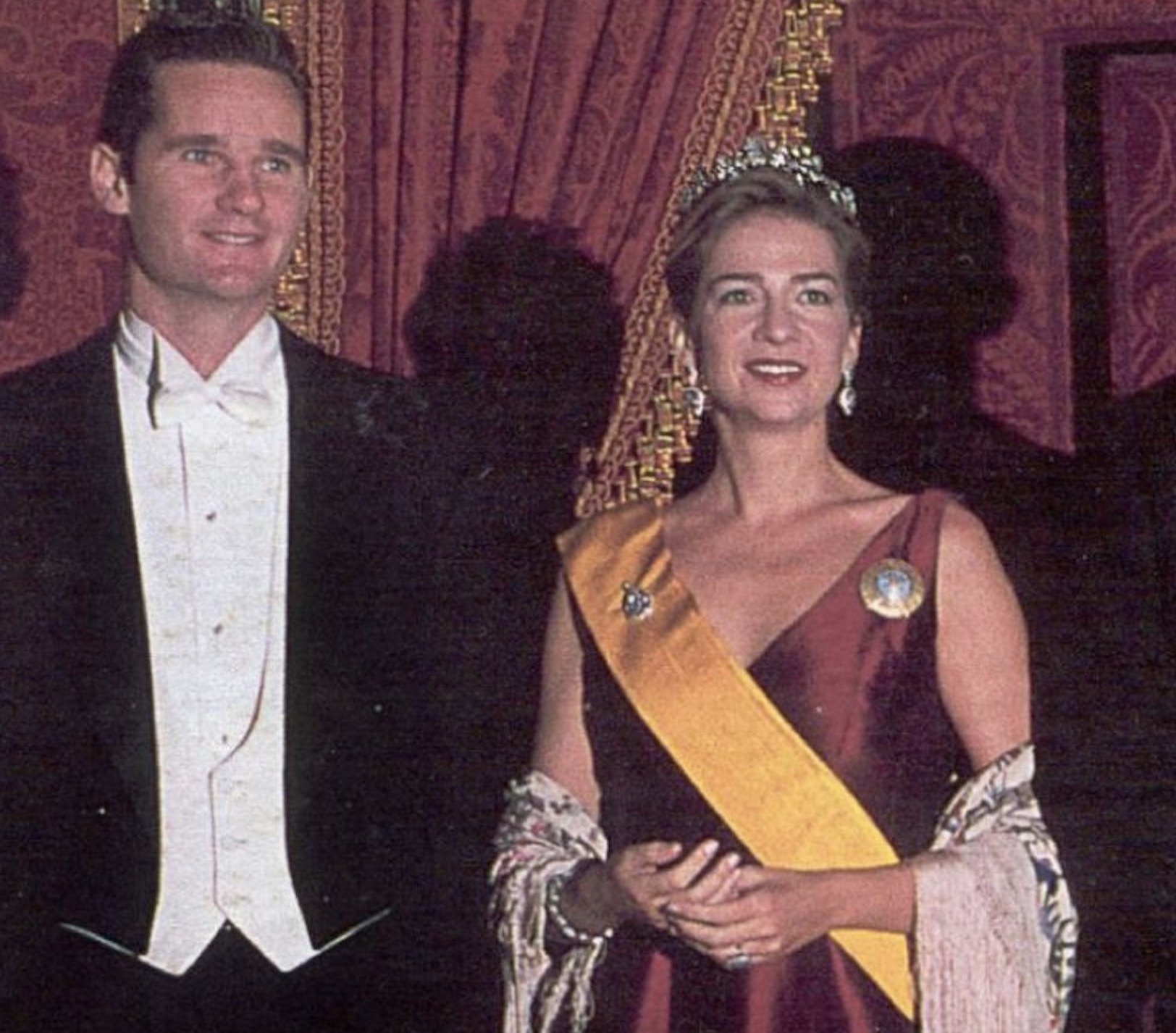 Reportedly given to the Infanta on the occasion of her marriage to Iñaki Urdangarin in 1997, this parure comprises a necklace, a pair of earrings, a bracelet and a ring. Featuring pave-set sapphires, as well as brilliant- and baguette- cut diamonds, the earrings and the ring represent teardrops while the necklace and the bracelet are composed os striking ‘waves’ intertwined with diamond bars. Infanta Cristina first paired several elements of the parure, the earrings, ring and bracelet, with the Spanish Floral Tiara, in events such as a banquet in honour of Mexican President Vicente Fox in 2001 and for a banquet in honour of Peruvian President Alejandro Toledo in 2004.

In 2007, while attending King Harald of Norway’s 70th Birthday Celebrations, the Infanta wore the earrings and bracelet from the Sapphire Suite together again with the Spanish Floral Tiara for a Gala Banquet held at the Royal Palace of Oslo. 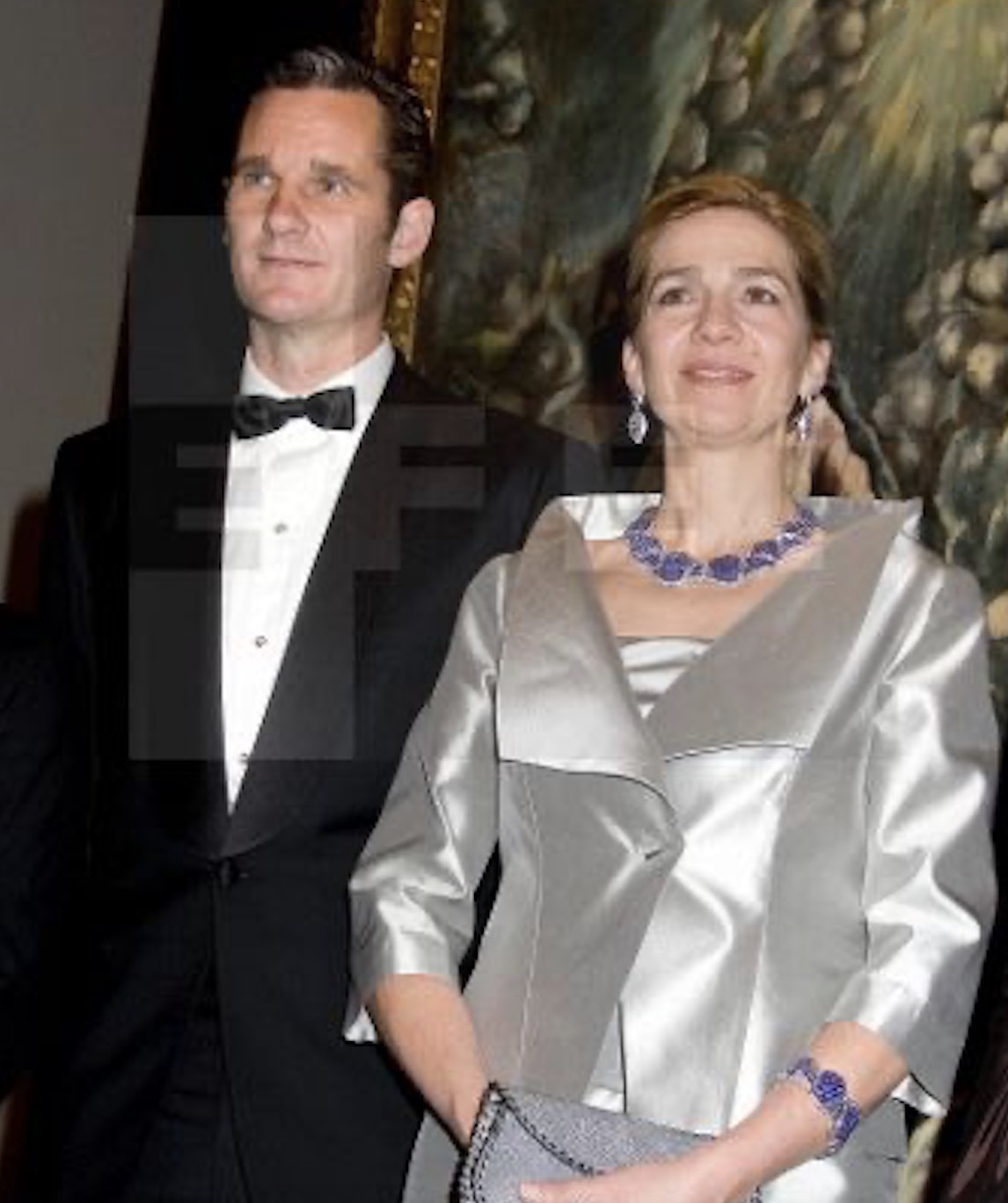 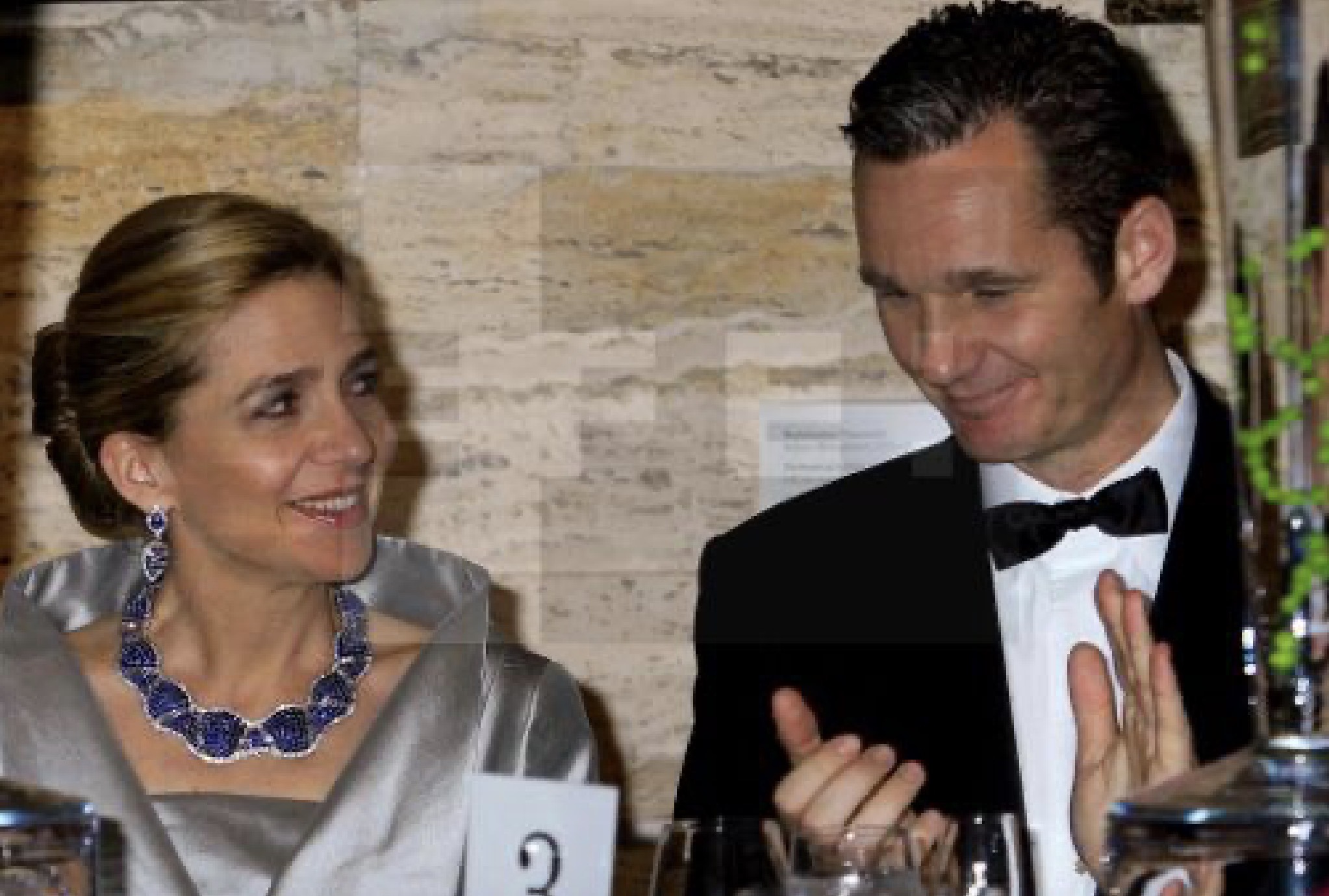 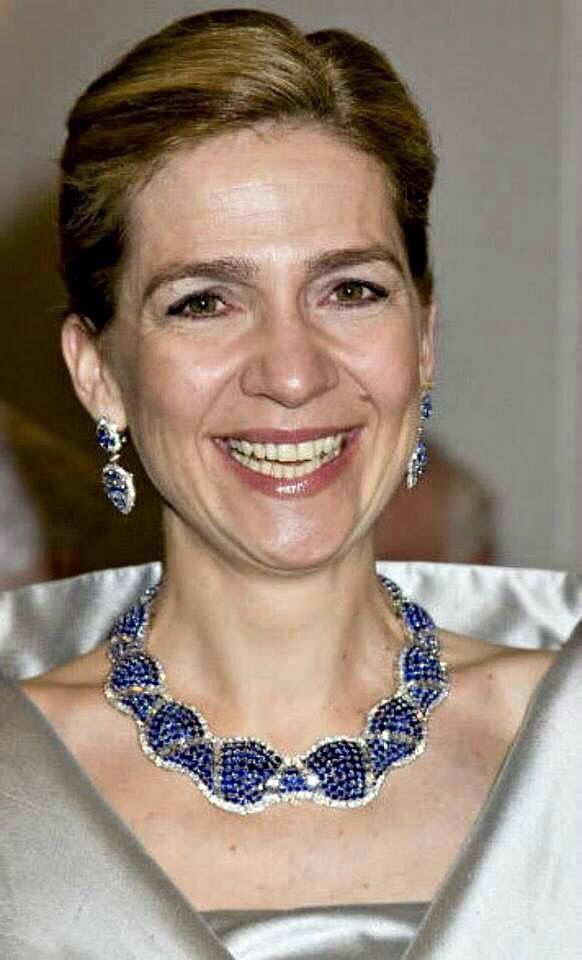 During an Official Visit to the United States in 2008, the Infanta surprised everyone by wearing publicly for the first time the massive necklace from the Sapphire Parure, while attending a gala dinner at Boston’s Museum of Fine Arts.

In 2010, Infanta Cristina wore the pair of earrings and the ring while attending the Sorolla Medal Gala in New York hosted by Hispanic Society of America. This remains the last public outing of elements of the Sapphire Parure. Since public scandal rocked her family, the Infanta’s public appearances almost disappeared. Let’s hope Doña Cristina is able to keep the Sapphire Parure so we have the possibly to see these pieces somewhere in the future, though it may come up for auction like her ruby suite.