More than 5.000 Spanish citizens travelled from Spain to Greece on board of two special Cruise Ships: the “Cabo San Vicente”, from Ybarra company, and the “Villa de Madrid”, from Transmediterránea. The ships made a stopover in Piraeus Port from the 11th to 17th of May, so that their guests could presence all the important events of such an historic occasion. For weeks, Spanish newspapers advertised the special cruises and even made contests for people to win a chance to travel to Athens for free. The people who travelled to Athens for the festivities were invited to a Garden Party at the Royal Palace hosted by King Paul and Queen Frederica of Greece, with the presence of the bride and groom, as well as the Spanish Royal Family. Spanish Ambassador Marquess of Luca de Tena also hosted a reception in the gardens of the Tennis Club. During those days, the Ships were converted into lively party places, with gala dinners, balls, contests and dance shows.

One of the most memorable events taking place at the “Cabo San Vicente” was a reception and dance show held on the eve of the Religious Ceremonies. The Count and Countess of Barcelona presided the event as guests of honour and were accompanied by several royal relatives. As a curiosity, this reception took place on the same day of one of the Pre-Wedding Balls at the Royal Palace of Athens, because of that, Royals attended with the same gala attire, while younger ladies kept their decorations and tiaras, senior royal ladies removed them. Infanta Pilar even changed clothes completely.

Attendees included the Count and Countess of Barcelona (wearing her Diamond Riviere Necklace and Art-Deco Bracelet), Infanta Pilar, the Count and Countess of Paris (in parts of the Orléans Sapphire Parure), Prince Pedro Gastão and Princess Esperanza of Orléans-Braganza (in Queen Amelie of Portugal’s Emeralds) and Princess Dolores Czartoryski (wearing her fabulous Emerald Jewels). 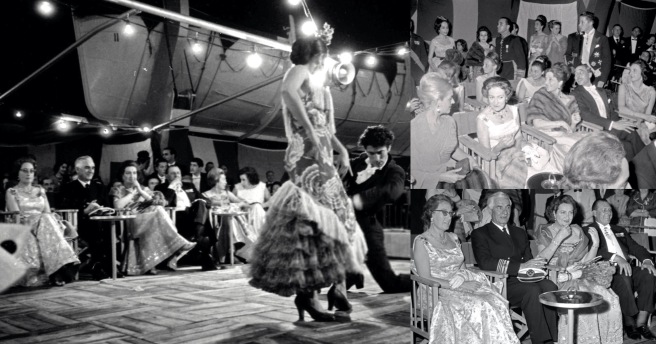