Today marks the 75th Anniversary of the death of Infanta Maria de la Paz, Princess of Bavaria, who died on this day in 1946 after falling from the stairs! Infanta Paz was the third daughter and fourth surviving children of Queen Isabella II of Spain and King Consort Francisco de Asís. In 1883, she married her first cousin, Prince Ludwig Ferdinand of Bavaria. The couple lived a long and happy marriage that produced three children. They lived a quiet and simple life in Nymphenburg Palace, in Munich. The Infanta was a beloved member of both her Borbón and Wittelsbach family, about who everyone always spoke with affection. She dedicated her life to her family, to charitable work, and to the arts, writing books and poetry. To mark the anniversary, we are featuring her Fleur de Lys ‘Sunburst’ Tiara! 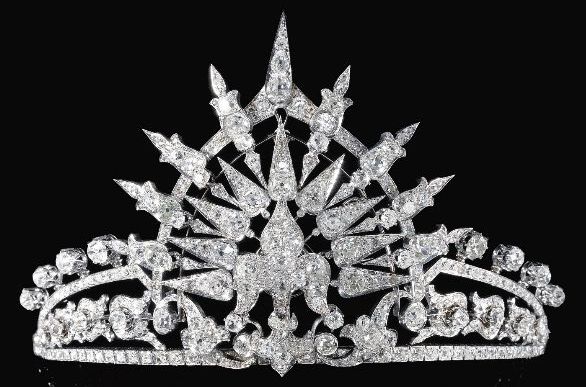 On the occasion of her marriage, the 20-year-old Infanta received many pieces of jewellery as a gift from both her family and from the groom’s family. Prince Ludwig himself, presented his bride with a diamond tiara made by a Munich-based jeweller, valued in 20,000 pesetas. The piece has a prominent central element with a fleur-de-lis set en tremblant, from where several spiky elements “radiate”, the side elements are decorated with foliage motifs, it is set with cushion-shaped, brilliant, and rose diamonds mounted in silver. It has a detachable frame, allowing the elements to be repurposed as a necklace and aigrette. According to several press reports, Infanta Paz debuted her Fleur de Lys Tiara on the eve of her marriage ceremony, at a concert at the Royal Palace of Madrid hosted by King Alfonso XII in honour of his Bavarian guests. On the day of the religious wedding, Doña Paz wore this tiara to secure her bridal veil.

Infanta Maria de la Paz seems to have favoured more her Pearl and Diamond Tiara, that she wore at a major part of the high profile events she attended on her homeland Spain, and was rarely pictured in this Tiara. Nevertheless, the Infanta’s descendants managed to keep this tiara and other important heirloom pieces for several generations. 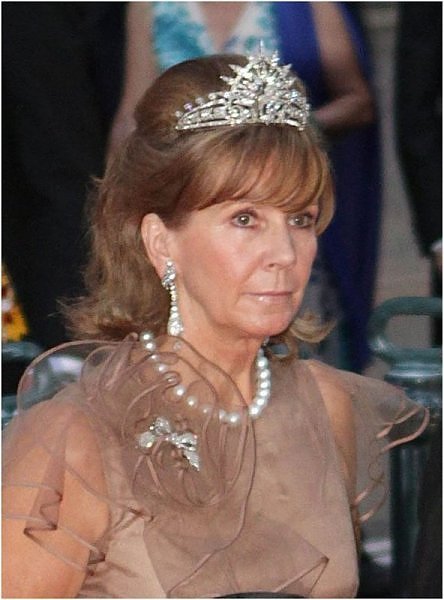 Prince Leopold and Princess Ursula are great friends of the Swedish King Carl XVI Gustaf and Queen Silvia, with Prince Leopold among the godparents of their only son, Prince Carl Phillip. Because of this close friendship, the Prince and the Princess are a regular presence at the important celebrations of the Bernadotte family. Princess Ursula has worn the Fleur de Lys Tiara at some of King Carl Gustaf’s birthday celebrations. She has also loaned the piece to her daughter-in-law for the Wedding of Crown Princess Victoria and Daniel Westling in 2010.

On May 12, 2012, the Fleur de Lys Tiara was once again worn as a bridal tiara. Infanta Paz’s great-great-granddaughter, Princess Maria Felipa borrowed the piece when she married Christian Dienst, in a ceremony at Wieskirche, in Steingaden, Germany.

This is some HAIR. RT @TildaAng: Prince Manuel & Princess Anna of Bavaria and Hubertus, Hereditary Prince of S-C&G http://t.co/dptsyQ0old

Sadly, a year later, the tiara (and several other heirloom pieces) was auctioned off at Sotheby’s Geneva , reaching the sum of 173,000 Swiss francs. Since then, Princess Ursula and her daughter-in-law have opted for some smaller tiaras when attending galas, namely the Wedding of Princess Madeleine and Christopher O’Neill, the Wedding of Prince Carl Phillip and Sofia Hellqvist, King Carl Gustaf 70th Birthday Banquet, and the Wedding Gala of Duchess Sophie of Wurttemberg and Count Maximilien d’Andigné.

One thought on “Bavarian Sunburst Tiara”