Today marks the 55th Anniversary of the Birth of Princess Viggo of Denmark, who died on this day in 1966! An American Heiress who married a Danish Prince and possessed many grand jewels, to mark the anniversary, we are taking a look at one of Princess Viggo’s most well-known jewels, her Garnet Kokoshnik Tiara!

Created by Aage Dragsted in the 1930s, this Kokoshnik Tiara is of floral and foliate design, set with  garnets, a central natural pearl, cultured pearls and cushion-shaped, circular-, single-cut and rose diamonds. The detachable diamond rivière surmount can also be worn separately.

The Tiara commissioned by Prince Viggo of Denmark for his wife, Princess Viggo, a wealthy American Heiress for whom Prince Viggo gave up his place in the line of succession, who wore the Garnet Kokoshnik for the Wedding Ball of Crown Prince Frederik of Denmark  and Princess Ingrid of Sweden at the Royal Palace of Stockholm in 1935, an official portrait in the 1950s, and the Wedding of Princess Astrid of Norway in 1961.

The Queen and Duke of Edinburgh host a magnificent Return Banquet for the Danish Royal Family on board the Royal Y… twitter.com/i/web/status/1…

In 1957, Princess Viggo loaned the Garnet Kokoshnik Tiara to her niece-in-law, Princess Anne of Denmark for a Return Banquet on board the Royal Yacht Britannia during the British State Visit to Denmark. After the childless Princess Viggo’s death in 1966, her Jewels were divided between family members. The Opal Tiara went to her nephew, Count Flemming of Rosenborg to be worn by his wife Countess Ruth, while the Diamond Scroll Tiara was inherited by his brother, Prince George, who had no children and left it to Princess Anne’s daughter, Lady Elizabeth Anson. A faux copy of the Diamond Scroll Tiara was inherited by another nephew, Count Christian of Rosenborg, while a Sapphire Parure was left to another niece, Queen Anne of Romania.

The Garnet Kokoshnik Tiara was inherited by her sister-in-law, Princess Margaretha of Sweden and Denmark, who left it to her son, Count Flemming, in 1977. Count Flemming and his wife, Countess Ruth, were close the Danish and Norwegian Royal Families, and she wore the Garnet Kokoshnik Tiara at many prominent events, including Crown Prince Harald’s 50th Birthday in 1987, Crown Prince Haakon’s 18th Birthday in 1991, Queen Margrethe’s 60th Birthday in 2000, the Wedding of Princess Märtha Louise of Norway in 2002, and King Harald’s 70th Birthday in 2007, alternating with Princess Ingeborg’s Turquoise Star Tiara.

In 2004, Countess Ruth loaned the Garnet Kokoshnik to her eldest daughter-in-law, Countess Jutta of Rosenborg, for the Wedding of Crown Prince Frederik of Denmark. After Countess Ruth’s death in 2010, the Garnet Kokoshnik Tiara was inherited by one of their younger sons, and after they failed to sell it Bukowskis in Stockholm in 2012, the Tiara was eventually sold it at auction at Sotheby’s in Geneva in 2014 for 245,000 CHF. 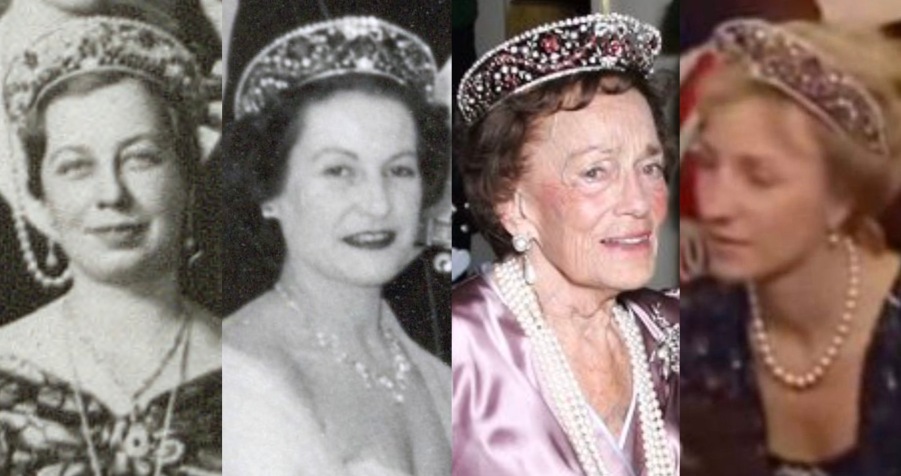