Today marks the 180th Anniversary of the Birth of Victoria, Princess Royal and Empress Frederik, the eldest daughter of Queen Victoria who married Emperor Frederik of Germany and was the mother of Kaiser Wilhelm II . To mark the anniversary, we are taking a look at Empress Frederick’s Pearl Corsage Brooch.

But first, lets learn about Empress Frederik! The first child and eldest daughter of Queen Victoria and Prince Albert, the Princess Royal grew up between Buckingham Palace, Windsor Castle, Balmoral Castle, and Osbourne House, where she was joined by eight younger siblings, including the future King Edward VII, and was given a liberal education by the Prince Consort. In 1858, the Princess Royal married Prince Frederick of Prussia, the second-in-line to the Prussian Throne, and the couple had eight children, including Kaiser Wilhelm II and Queen Sophia of Greece. The Crown Prince and Crown Princess of Prussia (and later of Germany) shared politically liberal views, which put them in opposition to the Royal Court particularly after the rise of the conservative Otto von Bismarck. Emperor Frederik only reigned for 99 days in 1888, until his untimely death of Cancer, and the Empress, in opposition to her son’s conservative views, build the Schloss Friedrichshof in Kronberg im Taunus, where she resided until her death in 1901, just a few months after Queen Victoria’s death.

Victoria, Empress Frederick of Germany, 1900 – Born Princess Royal, known as Vicky, she died of breast cancer #onthisday in 1901 in Schloss Friedrichshof, Kronberg im Taunus, Grand Duchy of Hesse, German Empire, aged 60. – She was the eldest daughter and child of Queen Victoria. Married the future Kaiser Friedrich III at age of 17 in 1858, the couple had eight children, including Kaiser Wilhelm II and Queen Sophia of Greece. In 1888, upon the death of Kaiser Wilhelm I, her husband succeed as the German Kaiser while she became the Kaiserin. However, she was widowed after three months and was known as Kaiserin Friedrich, as the Empress Dowager was still alive. – Vicky devoted part of her final years to painting and to visit the artists' colony of Kronberg, where she regularly met with the painter Norbert Schrödl. In her last days, she used to walk in the morning and spent long hours writing letters or reading in the library of her castle. – In late 1898, physicians diagnosed the Vicky with inoperable breast cancer, forcing her to stay in bed for long periods. The cancer spread to her spine by the autumn of 1900, and as she worried about her personal letters, in which she detailed her concern over Germany's future under her son, falling into the hands of the Kaiser. She requested that the letters be brought back to Great Britain in a cloak-and-dagger operation by her godson Frederick Ponsonby, the private secretary of her brother King Edward VII, who was making his final visit to his terminally ill sister in Kronberg on 23 February 1901. – Seven months after Queen Victoria's death, Vicky died of Breast Cancer in Friedrichshof, German Empire, and was buried next to her husband in the royal mausoleum of the Friedenskirche at Potsdam on 13 August 1901. · #princessvicky #princessvictoria #kaiserinfriedrich #empressfrederick #victoriaprincessroyal #victoriagermanempress #victorianroyals #victorianera #prussianroyals

Featuring an ornate diamond element with a large round pearl, from which any of one, three, or five pearls can be suspended, the Pearl Corsage Brooch has an unknown provenance, though it probably originates from the Pearl and Diamond Corsage Brooch given as a Wedding gift from Queen Elisabeth of Prussia. Empress Frederik was pictured in the brooch in a series of portraits in the 1890s, after being widowed.

#onthisday Queen Victoria’s granddaughter, Dowager Queen Sophia of Greece, died on 13th January 1932 due to cancer in Frankfurt. She was 61. She was then buried on 16th at a Greek Orthodox Church in Florence then at Tatoi Palace, Greece #queensophiaofgreece #vickysdaughter #frankfurt #germany #florence #italy #tatoipalace #tatoi #greece #otd

After her death in 1901, Empress Frederick’s Pearl Corsage Brooch was inherited by her daughter, Queen Sophia of Greece, who was frequently pictured wearing the Brooch with her Diamond Tiara and Diamond Circle Tiara in the 1900s and the 1910s, though it was not publicly worn after the Greek Royal Family went into their frequent exiles in 1917 and later in 1922. It is unknown what happened to Empress Frederick’s Pearl Corsage Brooch after Queen Sophie’s death, but its quite likely that it may have been acquired by either Queen Mary (cousin), Grand Duchess Elena Vladimirovna, Princess Nicholas of Greece (her sister-in-law) or Princess Marina, Duchess of Kent (niece) from the Greek Royal Family anytime between the 1920s and the mid-1950s, when an identical Pearl Corsage Brooch began to be worn by Princess Alexandra of Kent.

When Princess Marina of Greece married Prince George, Duke of Kent, she brought to England with her a set of diamond stars which could be worn as hair ornaments or as brooches. They were inherited by her daughter Princess Alexandra who uses them as hair ornaments. 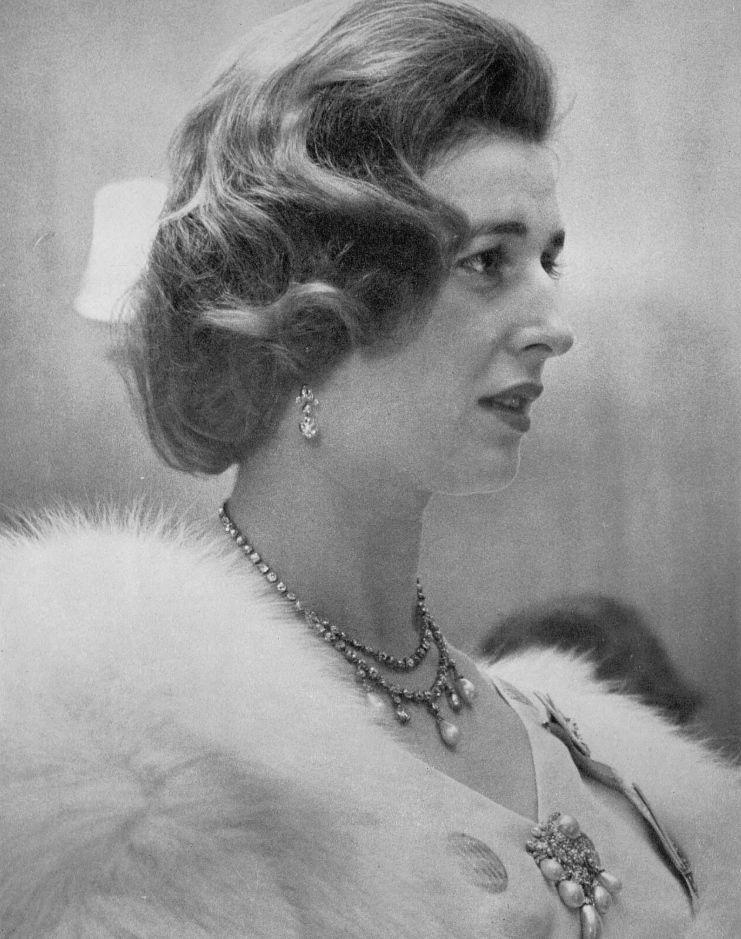 The Queen’s cousin, Princess Alexandra has been a hardworking member of the Royal Family for over 65 years and prominently wore the Pearl Corsage Brooch with the Kent Festoon Tiara when she presided over the Nigerian Independence Celebrations in 1960, and was frequently worn, with three and five pendants, in the 1960s and the 1970s, though it has been rarely seen in recent years, with the American State Banquet last year, when she wore her Ogilvy Tiara, being the last appearance to date, but that gives us hope that we will continue to see Empress Frederick’s Pearl Corsage Brooch for years to come!

Princess Alexandra’s diamond and pearl brooch has been covered on this page before but nothing has been confirmed about its history. I’ve even previously speculated it was very similar to a brooch worn by Empress Maria, wife of Tsar Alexander II. I recently came across photos of Empress Frederick, daughter of Queen Victoria and her daughter Queen Sophie of Greece wearing an identical brooch. Could it be the same? The brooch could have passed from Queen Sophie to her sister-in-law Princess Nicholas, mother of Princess Marina. It is hard to speculate with so many family connections. What do you all think? Is this the same brooch? If so how did it get from Queen Sophie of Greece to her great-niece Princess Alexandra?