Happy Birthday to Infanta Margarita, Duchess of Soria and Hernani, who turns 83 today! The younger sister of King Juan Carlos and the aunt of King Felipe, who was born blind, she has attended a plethora of glittering events over the decades, and to mark her birthday, we are featuring Queen Maria Cristina’s Strawberry Leaf Brooches!

On January 13, 1878, King Alfonso XII married his first cousin, Infanta Maria de las Mercedes, the daughter of Infanta Luisa Fernanda and Prince Antoine of Orléans, Duke of Montpensier. Mercedes and Alfonso had begun their love story years earlier, despite the strong opposition showed by his mother, Queen Isabel II, due to the confrontation she had with Mercedes’ father, who conspired against her, with the hopes of deposing her and gaining the throne for him and his wife. This love story conquered Spanish people’s hearts, rising the young couple’s popularity.

The King presented his bride with some very beautiful pieces of jewellery, namely a large diamond and pearl tiara, a pearl necklace, matching earrings and a diamond crown. This royal crown, valued in more than 1 million pesetas of that time, was made of 5000 diamonds set in silver and gold, designed by Francisco Marzo. Unfortunately, Queen Mercedes had little time to wear her jewellery collection, as she died less than a year after the wedding, leaving her passionate King, as well as her the Spanish subjects desolate.

In order to provide the Spanish crown with an heir, King Alfonso married for the second time in November 1879. The new Queen of Spain, born Archduchess Maria Cristina of Habsburg-Lorraine, was also showered with wedding gifts. Most of them were specifically designed for these occasion minus one of them: a diamond crown or circlet. This piece was no other than the crown of Queen Mercedes without the diadems, the orb and the cross on the top.

Five days later he was carried in a solemn court procession with a golden fleece round his neck and was baptized wi… twitter.com/i/web/status/1…

It consisted of an elaborate diamond base topped by eight strawberry leaves. Queen Maria Cristina wore this piece quite often, we can find many portraits of her wearing it, mostly during her time as Queen Regent, when her son, King Alfonso XIII, was still a minor.

At a certain point, this piece seems to have been (partially) dismantled as there are no representations of an elder Queen Maria Cristina wearing it. However, the Queen was seen wearing five strawberry leaf brooches set on a band and worn as a choker, namely at the wedding of her eldest daughter, Princess Mercedes to Prince Carlos of Borbon-Two Sicilies in 1902.

Many years later, Princess Maria de las Mercedes, the wife of Don Juan, the Pretender to the Spanish throne, was seen wearing a pair of diamond-set Strawberry Leaf Brooches. The pieces were probably given to her by her father-in-law, King Alfonso XIII, who in turn, had inherited them from his own mother, Queen Maria Cristina. Doña Maria always wore two as a pair of brooches, although the original crown had eight strawberry leaves, were all of them in her possession? We don’t know.

In 1953, the Countess of Barcelona wore the Strawberry Leaf Brooches to secure her sash of the Order of Noble Ladies of Queen Maria Luisa at the Coronation of Queen Elizabeth II in Westminster Abbey. Some years later, she placed them as pins on her hat at the Wedding of Prince Carlos, Duke of Calabria and Princess Anne d’Orléans.

After the Countess of Barcelona’s passing, the pair of brooches were inherited by her youngest daughter, Infanta Margarita. However, the Infanta has preferred to wear only one of them in her public appearances, most notably for a concert at the Ritz Hotel during the Prince of Wales and Duchess of Cornwall’s visit to Spain. 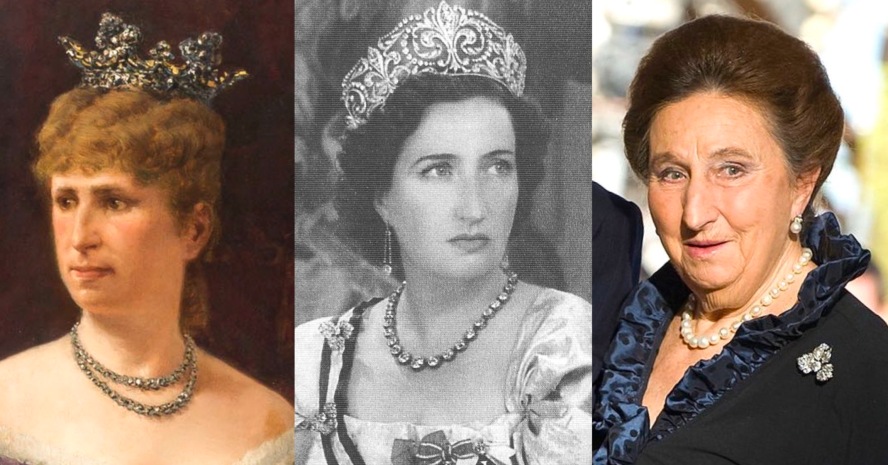