Happy Birthday to Duchess Sophie of Württemberg, who turns 85 today! The daughter of Princess Nadezhda of Bulgaria and Duke Albrecht Eugen of Württemberg, Duchess Sophie has had a long career int he fashion industry, and today gives us the perfect opportunity to feature the spectacular the Bulgarian Fringe Tiara!

But first, lets learn about Duchess Sophie! The daughter of Princess Nadezhda of Bulgaria, youngest daughter of Tsar Ferdinand of Bulgaria and Princess Marie Louise of Parma, and Duke Albrecht Eugen of Württemberg, son of the Duke of Württemberg and Archduchess Margarete Sophie of Austria, Duchess Sophie was the youngest of five children, and a sister-in-law of Archduchess Alexandra of Austria. After attending the Wald monastery school and the modern language Gymnasium Maria Ward in Munich, Duchess Sophie attended language courses in Paris and was then trained as a fashion illustrator, working as an assistant manager in the fashion houses of Jacques Heim and Pierre Balmain, and since 1982 she has been Directrice de la Haute Couture at Nina Ricci in Paris. Duchess Sophie’s interests include art, literature and classical music, and she is involved in the F.A.V.A., an aid organization for mentally handicapped children, as well as in an aid organization for hospitals and children’s homes in Rybinsk in Russia. We wish HRH a very Happy Birthday and Many Happy Returns!

A small Diamond Fringe Tiara, the Fringe Design was inspired by the Kokoshniks at the Russian Royal Court, notable examples of Fringe Tiaras are found in the British, Swedish, Danish, Thai, Monaco, Liechtenstein, Lesotho, Selangor and the Greek Royal Collections. The Tiara, probably made by Chaumet, was likely a wedding gift to Princess Marie Louise of Parma, daughter of Robert I, Duke of Parma, when she married Prince (later Tsar) Ferdinand of Bulgaria in 1893, who gave his bride the Köchert Fleur-de-Lys Tiara. The Fringe Tiara was notably worn for a series of official portraits before her early death in 1899, right after giving birth to her youngest child, Princess Nadezhda. 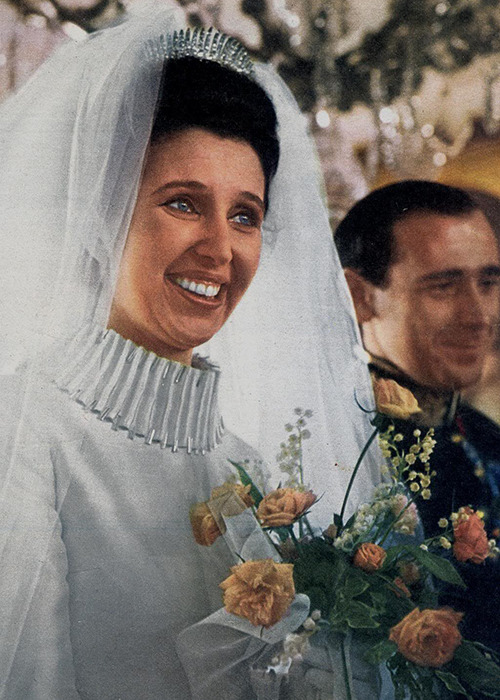 It seems that the aforementioned Princess Nadezhda inherited the Fringe Tiara and took it to Germany when she married Duke Albrecht Eugen of Württemberg in 1924. While Princess Nadezhda was not pictured in the Fringe Tiara, after her death in 1958, it was worn by her younger daughter, Duchess Sophie of Württemberg, for her wedding to Antonio Manuel Rôxo de Ramos-Bandeira in 1969, and the following year by her elder daughter, Duchess Margareta Luise of Württemberg, for her wedding to Count François Luce de Chevigny. The Tiara may have also been worn by their sister-in-law, Archduchess Alexandra, for Duchess Sophie’s Wedding Ball, though the pictures are inconclusive.

In 1989, the Bulgarian Fringe Tiara was loaned to Princess Marie d’Orléans, daughter of Prince Henri, Count of Paris and Duchess Marie Thérèse of Württemberg, for her Wedding to Prince Gundakar of Liechtenstein at Schloss Friedrichshafen, a Württemberg Royal Residence, in the midst of a family rift in the Orléans Royal Family.

One thought on “Bulgarian Fringe Tiara”