Today marks the 65th Anniversary of the Death of Princess Marie Louise, who passed away on this day in 1956! The fascinating granddaughter of Queen Victoria who married and divorced a German Prince, and later became a Princess ‘of nowhere’’, the Princess possessed some splendid jewels and to mark the Anniversary, we are featuring the spectacular Cartier India Tiara! 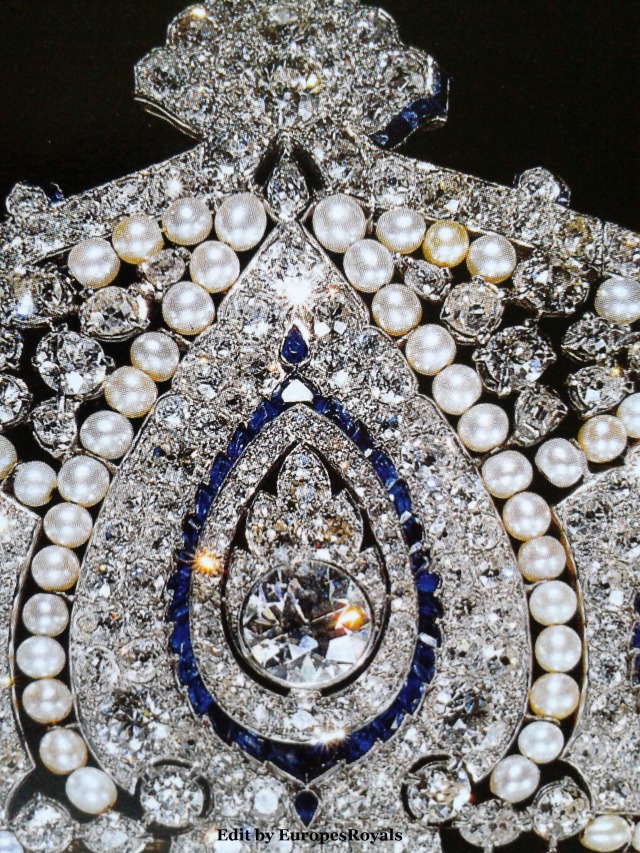 This spectacular Tiara, rendered solidly in diamonds, sapphires, and pearls, was inspired by the Indian Style jewels created by Cartier in the 1920s inspired by the Maharaja’s and Indian Architecture. The Tiara was bought by Beatrice Mills, the Countess of Granard in 1923, who had mounted additional Art Deco Diamond Brooches in place of aquamarines on the Tiara, before it was returned to Cartier around 1937.

In 1937, the Cartier India Tiara was acquired by Princess Marie Louise in time to wear at the Coronation of King George VI in 1937, and continued to be worn for years afterwards, most notably for the Coronation of Queen Elizabeth II in 1953, when she hid sandwiches and and a flash in her coronet, for the Swedish State Visit to Britain in 1954, and a series of portraits by Cecil Beaton, who began the session by thinking she must be ‘an old gaga absurdity,’ but by the end of the session he thought her ‘absolutely enchanting.’ The Tiara was usually worn with her Diamond Sunburst Brooch, which is now worn by the Duchess of Cornwall. 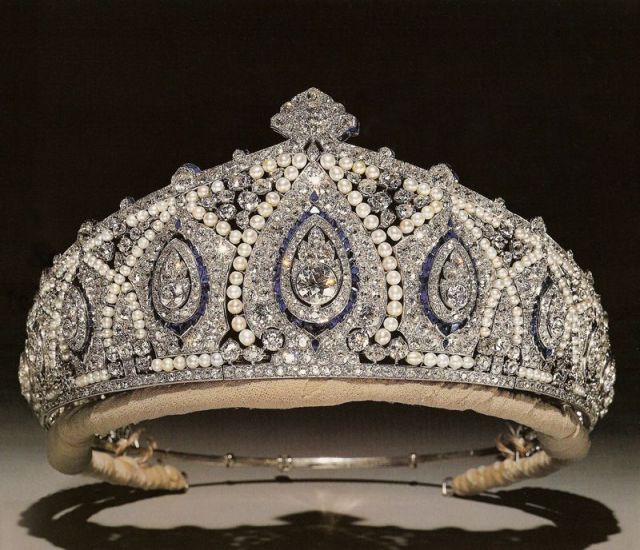 When Prince William of Gloucester and his younger brother, Prince Richard of Gloucester, were born in the 1940s, their grandmother, Queen Mary, suggested to their mother, Princess Alice, Duchess of Gloucester, to make Princess Helena Victoria and Princess Marie Louise their godmothers, with the Duchess saying:

Of course Mamma must have known Cousin Louie would leave them her things, that’s why she suggested it’.

So when Princess Marie Louise passed away in 1956, the Cartier India Tiara was inherited by her godson, Prince Richard, who was then only 12 years old, so it went into the collection of his mother, the Duchess, who was not a fan, saying:

‘Oh the tiara!’ the Duchess smiled. ‘It’s left to me for my life and then to Richard’s wife. But I can’t wear it, it’s too big.’

‘More like a mitre than a tiara, I remember’, said Princess Alice, Countess of Athlone.

‘Oh much too heavy.’

Princess Marie Louise also left some Jewels to the Queen, the Diamond Sunburst Brooch to the Queen Mother, and the Honeysuckle Tiara, as well as a Cartier Stomacher we will feature for the 150th Anniversary of her birth next year, to her cousin, Lady Patricia Ramsay.

As a younger son, the Cartier India Tiara was set to be the main Tiara to be worn by Prince Richard’s wife, the future Princess Richard of Gloucester, though the untimely death of his elder brother in a place crash just weeks after their wedding meant that the couple succeeded to the Dukedom and the Duchess got access to the entire jewellery collection. The Cartier India Tiara made a few appearences on the Duchess in the 1980s, usually for Guildhall Banquets and the Dutch State Banquet in 1982, and was even ‘worn’ by her daughter, Lady Davina, in a fun portrait by Norman Parkinson; 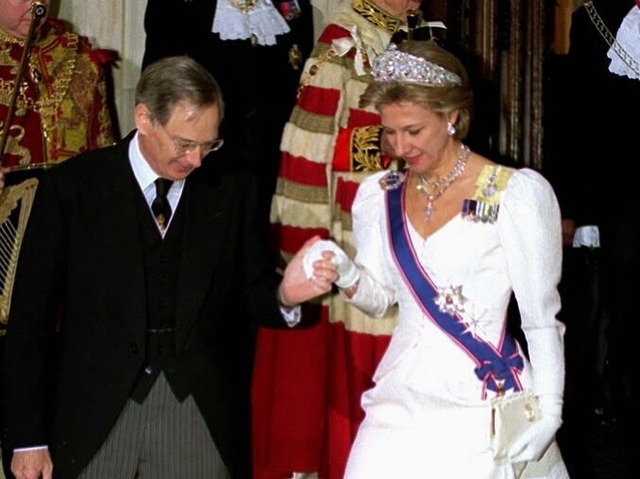 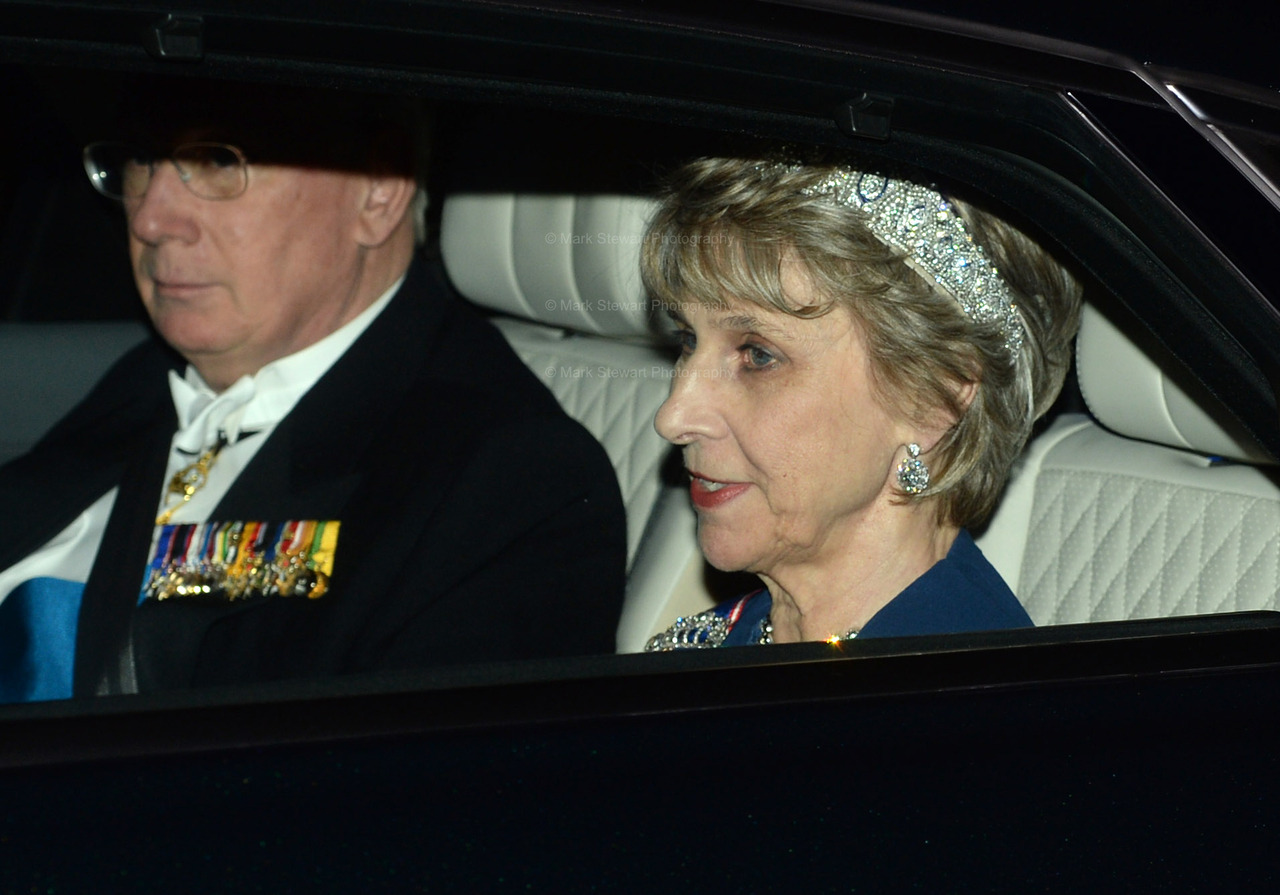 The Duchess of Gloucester has quite a large jewelry collection with the Gloucester Honeysuckle Tiara and the Teck Turquoise Tiara taking priority, despite the Cartier India Tiara and Iveagh Tiara also Tiaras of quite substantial size without even mentioning the smaller Tiaras. Despite that, the India Tiara has been worn quite regularly over the years, usually for State Openings of Parliament, Guildhall Banquets, and also State Banquets, with the most recent appearance at the Dutch State Banquet at Buckingham Palace in 2018.

The Cartier India Tiara has also been exhibited at Cartier Exhibitions around the world for years, including currently at the “Cartier and Islamic Art: In Search of Modernity” Exhibition at the Musée des Arts Décoratifs in Paris from 21 October 2021 to 20 February 2022 and will then be exhibited at the Dallas Museum of Art in Texas from 14 May 2022 to 18 September 2022. There is no doubt we will continue to see Princess Marie Louise’s splendid Cartier India Tiara for years to come!

One thought on “Cartier India Tiara”