This week marks the 85th Birthday of the late Infanta Pilar of Spain, Duchess of Badajoz, the elder sister of King Juan Carlos. The late Infanta possessed a spectacular jewellery collection, and over the last few days leading up to the anniversary, we have been featuring some of the most splendid piece, finishing with Infanta Pilar’s Sapphire Tiara! 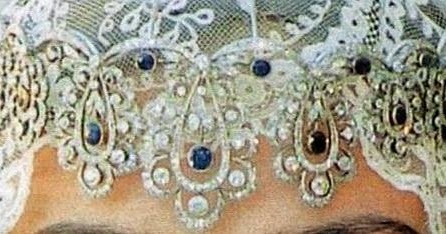 The tiara features seven loops, that decrease in size, from the centre to the tips. Each one of them is centred by a round sapphire. These are connected at the base with diamond swags topped by eight small sapphires in between the loops. The piece has a naturalistic design inspiration, as the seven main elements try to replicate flower petals. Also, it is quite evident that it shares many similarities with Queen Maria Cristina’s Loop Tiara. According to information gathered by Pablo Milstein, the piece comes from the Countess of Barcelona’s family. It belonged to the first Countess of Paris, Marie Isabelle of Orléans (née Infanta of Spain), daughter of Infanta Luisa Fernanda and Antoine, Duke of Montpensier. It was inherited by her daughter, Infanta Luisa, and then given to Doña Maria de las Mercedes.

Unfortunately, there are no known pictures/portraits of the Countess of Paris and Infanta Luisa wearing the tiara. For some time, it was also assumed that the Countess of Barcelona has never worn it. Fact that we now know that is not true, as Doña Maria wore it on at least one occasion: the Debutante Ball of her niece, Princess Sandra Torlonia, in Rome in 1954.

On that same year, the tiara was loaned to the Countess of Barcelona’s half-sister, Infanta Isabel Alfonsa, Countess Zamoyski, on the occasion of Infanta Pilar’s Debutante Ball, in Estoril. Doña Maria de las Mercedes later recalled in her memoirs that:

Isabel my sister, who was too simple, said that she did not like to dress elegantly, and then we, Alfonso and Dolores, my brothers, the Bavieras, Don José Eugenio and Marisol, decided to put her beautiful for this occasion. In the end she was looking great, just like La Chata! She spent the whole night tight-lipped because she said that the taste of the lipstick disgusted her. “

The tiara was then given by the Countess of Barcelona to her eldest daughter, Infanta Pilar, who started wearing it right after her coming of age. She is the person most associated with this piece, it can be considered her go-to tiara. The young Infanta wore it on two of the most glittering occasions of the past century: the Wedding Ball of Prince Juan Carlos and Princess Sofia, in 1962, and the Wedding Ball of King Constantine II and Princess Anne Marie, in 1964.

Three years later, Infanta Pilar married the Spanish aristocrat Luiz Goméz-Acebo y Duque de Estrada in a ceremony that took place in Mosteiro dos Jerónimos in Lisboa (Portugal).  On the previous evening, a lavish Pre-Wedding Banquet took place at Hotel Palácio, in Estoril. On that occasion, the Infanta combined her Sapphire Tiara with some pieces from her Diamond Suite.

Doña Pilar wore the tiara on many occasions, both in Spain and abroad. She selected it for various social events and State Banquets at the Royal Palace of Madrid, during her brother’s reign.  One of the last times it was worn by the Infanta was in 2006, during a State Banquet given in honour of the Portuguese President Cavaco Silva.

A curious fact is that it was even loaned by the Infanta to a friend, who wasn’t part of the Royal Family. In the 1980s, she loaned it to the new daughter-in-law of Don Alfredo Ceño and Baroness Hertha Von Stengel, for her wedding ceremony in Murcia.