Next week marks the 85th Birthday of the late Infanta Pilar of Spain, Duchess of Badajoz, the elder sister of King Juan Carlos. The late Infanta possessed a spectacular jewellery collection, and over the next few days leading up to the anniversary, we are featuring some of the most splendid piece, staring with Infanta Pilar’s Diamond Suite!

In October 1954, events to mark Infanta Pilar’s coming of age and official presentation to society were held in Estoril (Portugal), where the Spanish royal family lived in exile. On the 14th in the afternoon, a reception was held in the gardens of Villa Giralda, the home of the Counts of Barcelona. The next day’s grand gala event took place in the rooms of the Hotel do Parqu, where the Infanta wore a special pair of diamond earrings.

On this occasion, Infanta Pilar received many gifts that filled one of the rooms of Villa Giralda. Among them there were pieces of silver, fur coats, fans, handbags and some jewellery. These were gifts from her relatives, friends, Spanish nobles and various organizations. The best and most valuable gift that Doña Pilar received was a diamond suite with a floral design that comprises a pair of twin broches, a ring, an evening watch and a pair of earrings. This set of jewels, surely Spanish-made, was payed by a national subscription organized in Spain. In the cardboard that was placed inside the jewel-case, it is possible to read “Gift of Madrid, Seville, Bilbao, San Sebastian, Jerez de la Frontera, Cadiz, Valladolid, Salamanca and Jaén”.

The Infanta debuted the earrings from the suite on the night of her Puesta de Largo. These pieces will be worn on several important events in the life of Doña Pilar, such as her Pre-Wedding Ball and her Wedding Ceremony. A curious fact is that the suite was never publicly worn together at the same time, as she prefered to pair some of the pieces with others items from her amazing jewellery collection.

Despite the fact that Doña Pilar was not a working member of the royal family, she undertook several official engagements on behalf of her brother, King Juan Carlos I. She would often be seen attending State Banquets at the Royal Palace. For some of those high-profile events, the Infanta selected pieces from her diamond suite, namely during the British State Visit to Spain in 1988 and the Portuguese State Visit to Spain in 2006. The pair of brooches was most notably worn at the Wedding Ceremony of Infanta Elena and Jaime de Marichalar in 1995.

Infanta Pilar’s daughter, Simoneta Gomez Acebo, also borrowed pieces from her mother’s diamond suite, namely the earrings for the Wedding Cerenomy of Princess Kalina of Bulgaria and the wedding of her brother, Fernando Gomez Acebo. 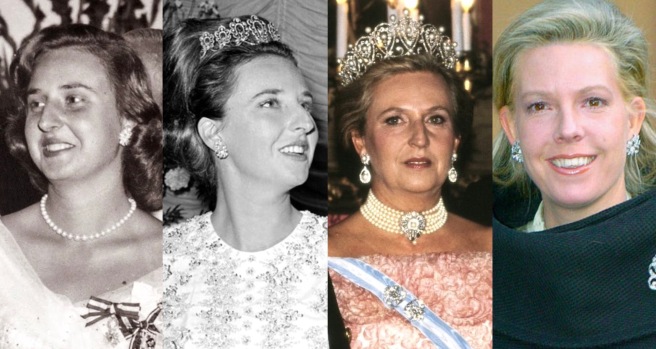