This week marks the 85th Birthday of the late Infanta Pilar of Spain, Duchess of Badajoz, the elder sister of King Juan Carlos. The late Infanta possessed a spectacular jewellery collection, and over the next few days leading up to the anniversary, we are featuring some of the most splendid piece, continuing with Infanta Pilar’s Emerald Suite!

This emerald suite consists of a brooch containing a 27-carat rectangular emerald surrounded by two diamond borders, a pair of button earrings and a ring. It’s first known owner was Isabel II, who possessed a spectacular jewellery collection, full of magnificent pieces set with the best stones in the world. Unfortunately, most of them left the family and some don’t exist anymore, as the Queen had to sell the bulk of her collection throughout her years of exile, in order to face her financial constraints. Queen Isabel II would be portrayed several times with this suite, often pairing it with the very heraldic Tiara de los Castillos y Leones. The brooch could also be used as a clasp for a pearl necklace. In 1904, Queen Isabel died, giving rise to a long and complicated process of dividing her possessions and complying with the wishes set forth in the testament. First, a new jewellery auction was thought as a possibility, but then the plan was abandoned. Her jewels ended up being divided in 4 lots (valued in more or less 66,000 francs each) and given to Infanta Isabel, Infanta Paz, Infanta Eulalia and to the descendants of Alfonso XII, who had already passed away.

But, before the division, the heirs had the opportunity to select and buy pieces that they really wanted to keep from the late Queen’s collection. King Alfonso XIII bought a pearl necklace and a pearl drop pendant, the ones that are part of today’s Joyas de Pasar, Infanta Isabel and Infanta Eulalia also bought some jewels, but it was Queen Maria Cristina who purchased more items. Among her purchases was the rectangular emerald brooch, valued in 16,000 francs. Unfortunately, there are no pictures of Queen Maria Cristina wearing this piece. The earrings from the suite ended up being inherited by Infanta Isabel (valued in 4,000 francs).When Queen Maria Cristina died, in 1929, her son, Alfonso XIII, inherited the rectangular emerald brooch. A couple of years later, when his aunt Isabel died, he also inherited the pair of button earrings. The Countess of Barcelona was gifted with this suite after she gave birth to Don Juan Carlos, the awaited male heir of the dynasty. She recalls in her memoirs that

when Juanito was born, Alfonso XIII gave me a brooch with a huge emerald that had a pair of earrings and ring en suite”.

Doña Maria de las Mercedes will wear the emeralds frequently, both on galas and daytime events. One of the most notable appearances was at the Christening of the now King Felipe VI of Spain in 1968. The Countess of Barcelona also paired some pieces from the emerald suite with other jewels from her collection, such as the Emerald Brooch inherited from her aunt, Queen Amelia of Portugal. 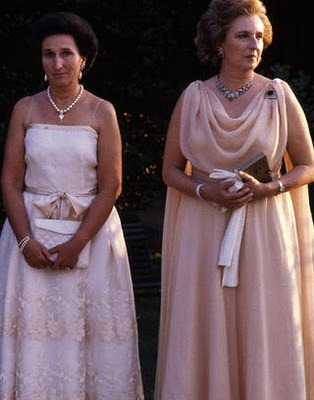 When Doña Maria de las Mercedes died, in 2000, the suite was part of the inheritance received by her eldest daughter, Infanta Pilar. The Infanta wore the emeralds extensively, converting them into one of her favourite jewellery choices. One of the most notable appearances was at the wedding of her son, Bruno Gómez-Acebo to Mónica Martín Luque, in 2004. Doña Pilar has also worn the brooch as a pendant, suspended from a small diamond riviére (h/t to Ines from Foro Dinastías).

The Infanta died in 2020 and the emerald suite seems to have been inherited by her only daughter, Simoneta Gómez-Acebo, who debuted the earrings this summer in a society wedding in Gijón, Spain.