Happy Birthday to the Duchess of Cornwall, who turns 74 today! While the Duchess can beautifully carry off some massive Tiaras and a large collection of chokers, she has also accumulated various gemstone and diamond suites, the favourite of which seems to be her splendid Modern Diamond Suite!

A suite of jewels reportedly created from a Tiara bought at Auction by the Prince of Wales, the earrings consist of a cluster of pear shape diamonds while the necklace has oval and marquise diamonds in an arrangement of stacks with a series of pear drop diamond pendants. The modern diamond suite is of unknown provenance but was likely a gift from the Prince of Wales to mark their wedding in 2005. The suite first made an appearance at a Dinner at the De Young Museum in San Francisco a few months later, during a Tour of the United States, and was also worn for a Gala Performance the following month.

The Modern Diamond Suite soon became a favourite of the Duchess of Cornwall, being paired with the Greville Tiara for a few State Banquets, including the Queen’s Commonwealth Dinner at Buckingham Palace in 2018, and also for the Royal Variety Performance in 2016, a Gala in Florence during a visit to Italy in 2017, and the Aga Khan’s Diamond Jubilee Dinner at Windsor Castle in 2018, being worn for a series of private and public occasions.

The Duchess has also worn the Earrings from the suite by themselves, or paired with the Greville Festoon Necklace or her 4-strand Pearl Choker with Queen Alexandra’s Antique Diamond Clasp, including for the Prince of Wales’ 70th Birthday Concert at Buckingham Palace in 2018 and the Diplomatic Reception at Buckingham Palace in 2016, 2017, and 2019.

The Prince of Wales and The Duchess of Cornwall at Clarence House this evening before departing for The Prince’s 70… twitter.com/i/web/status/1…

The Modern Diamond Suite continues to be a favourite of the Duchess of Cornwall, becoming the primary demi-parure worn worn by the Duchess in recent years as her go-to choice for Black Tie events, including at the Prince of Wales’ 70th Birthday Dinner at Buckingham Palace in 2018, a State Dinner in Munich during a visit to Germany in 2019, the Olivier Awards, and a Return Dinner during the American State Visit to Britain, which was the last public appearance of the necklace to date! However, there is no doubt we will continue to see this spectacular Diamond Suite for years to come. 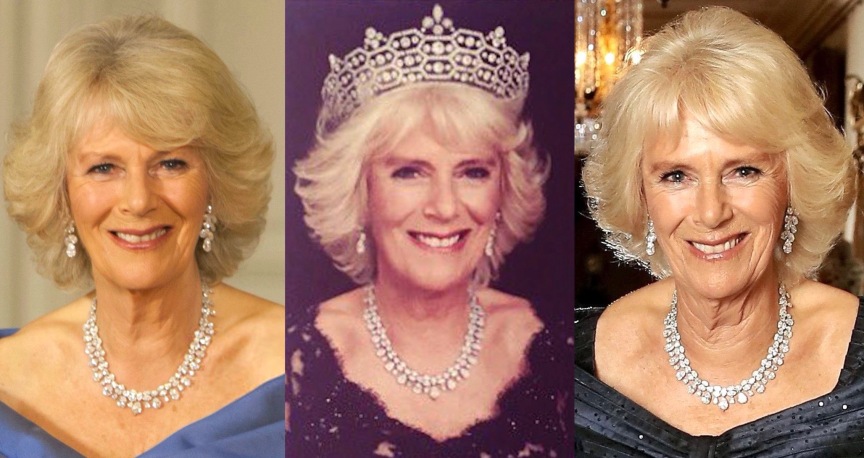 One thought on “Duchess of Cornwall’s Modern Diamond Suite”