The Accession of King Baudouin as King of the Belgians on this day in 1951, following the Abdication of his father, King Leopold III, due to his controversial role during the Second World War, surrendering to Germany and making an unpopular second marriage, which had put the future of the Monarchy at risk. King Baudouin was a popular King who reigned until 1993, when he was succeeded by his brother, King Albert II.

King Leopold III signed the Abdication document in the State Apartments at the Royal Palace of Brussels, after which the 20-year old Crown Prince Baudouin became the 5th King of the Belgians. The Crown Prince had already become Regent the previous year, just a few weeks after the Royal Family’s return to Belgium, when parliamentary dissent and public protests had forced King Leopold III to delegate his powers.

17/07/1951: Baudouin is sworn in as King o/t Belgians . He succeeds Leopold III who was forced to abdicate. https://t.co/rteDQWqtpJ

Later that day, the new King Baudouin (wearing the Order of Leopold) drove through the streets of Brussels to the Belgian Parliament, where he took the Oath of Office in front of a special session of the Parliament, before driving back to the Royal Palace and waving to crowds from the Balcony.

The only major celebration of King Baudouin’s Accession was his Silver Jubilee in 1976, the highlight of which was a Gala hosted by the King and Queen Fabiola (wearing the Wolfers Necklace Tiara and her Aquamarine Earrings) at the Royal Castle of Laeken.

1951: On July 17, royal powers were delegated to the 20-year old Baudouin, who would become the fifth King of Belgi… twitter.com/i/web/status/1… 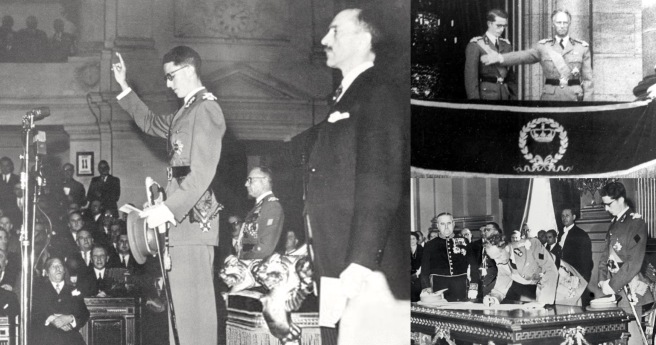