Happy Birthday to Princess Basma bint Talal of Jordan, who turns 70 today! The only daughter of King Talal and Queen Zein of Jordan, sister of the late King Hussein and aunt to the King Abdullah II, Princess Basma has been a hardworking royal for decades, so today we are featuring her heirloom Diamond Tiara!

But first, lets learn about Princess Basma! The youngest child and only daughter of King Talal and Zein Al-Sharaf, her father became King just two months later after the assassination of her grandfather, King Abdullah I, and was forced to abdicate the following year due to mental illness, making Queen Zein the Regent of Jordan until Princess Basma’s brother, King Hussein, came of age in 1953. Educated at the Ahliyyah School for Girls in Amman and at the Benenden School in England, where she became a friend of Princess Anne, Princess Basma then read Modern Languages at the University of Oxford, and in 2001, she was awarded a DPhil degree by Oxford University for a thesis entitled Contextualising development in Jordan: the arena of donors, state and NGOs. In 1970, Princess Basma married Colonel Timoor Daghistani, and had two children before they divorced in the late 70s, following which she married Walid al-Kurdi in 1980 and had two further children. A working member of the Royal Family since the 1970s, Princess Basma has also worked to promote human development, gender equity and children’s charities, contributing to the global debates on health, education, population and the environment. She is involved with various charities which include being the Founder of the Queen Alia Jordan Social Welfare Fund, President of the Arab Association for Women and Development, the President of the Jordanian National Commission for Women, Honorary Human Development Ambassador of the United Nations Development Programme, Goodwill Ambassador of the United Nations Development Fund for Women, Goodwill Ambassador of the United Nations Population Fund’s, Member of the International Advisory Board of the International Council on Social Welfare and a Member of the Earth Charter International Commission among many others. We wish HRH a very Happy Birthday and Many Happy Returns!

A dense composition of modern Diamond Scrolls, the Tiara is of unknown provenance, but was probably acquired around the time the Emirate of Jordan gained independence from Britain and became an independent Kingdom in 1946. Queen Zein was the Jordanian Queen for only a year, but continued to dominate the Court of her son for the next four decades. The most notable appearance of the Diamond Tiara was at the first Wedding of her son, King Hussein of Jordan, and and Princess Dina of Hijaz in 1955, but it continued to be worn into the 1970s and the 1980s.

In 2004, Princess Basma loaned Queen Zein’s Diamond Scroll Tiara to her elder daughter, Farah Al Daghistani, for her wedding to Saud Abdul Aziz Suleiman, making it a fitting link to her late grandmother. 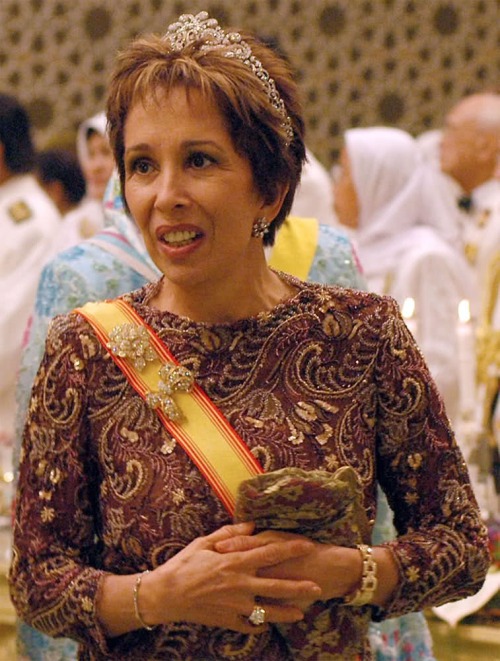 Princess Basma remains an active member of the Jordanian Royal Family and has accompanied King Abdullah and Queen Rania on State Visits and has also undertaken Official Tours herself. In 2001, she wore Queen Zein’s Tiara for a State Banquet at Windsor Castle during the Jordanian State Visit to Britain, and has also worn the Tiara on numerous occasions in Brunei, where she attended the Wedding of the Crown Prince of Brunei in 2004 and quite a few of the Sultan’s Birthday Celebrations. There is no doubt we will continue to see this Royal Heirloom worn for years to come.