Today’s Tiara belonged to three fascinating British Princesses, all granddaughters of Queen Victoria, who unlike their more famous cousins on European thrones, wore this piece as background British royals throughout the twentieth century. As always, click on the underlined / highlighted links to get to the post about a person / tiara / or event.

Composed of eighteen graduated ribbon and collet scrolls cultivating towards a honeysuckle, this Victorian tiara was probably made for Princess Helena of Schleswig-Holstein, third daughter of Queen Victoria, though she was not pictured wearing the piece.

The tiara was first seen on Princess Helena Victoria, daughter of Princess Helena, who probably inherited it from her mother in 1923. In 1917, the Princess, who never married dropped the Schleswig-Holstein off her title, becoming Princess Helena Victoria of no territorial designation. She wore the tiara at the Coronation of King George VI in 1937 and for an official portrait. After her death in 1948, the Honeysuckle Tiara passed to her younger sister.

Princess Marie Louise was the most colourful granddaughter of Queen Victoria. Unhappily married to Prince Aribert of Anhalt in 1891, in 1900, her father-in-law annulled the marriage while she was on an official tour of Canada. Also dropping the Schleswig-Holstein off her title, Princess Marie Louise became involved in charities and patronages, encouraging her cousin, Queen Mary, to commission her famous Doll’s House. At the 1953 Coronation of Queen Elizabeth II, she carried a supply of gin and tonic, and waved out the carriage window in the rain. Princess Marie Louise wore her mother’s Honeysuckle Tiara at an event in the 1950s and in a series of portraits by Cecil Beaton. When she died in 1956, she bequeathed her Cartier India Tiara to the Duke of Gloucester and the Honeysuckle Tiara to her cousin, Lady Patricia Ramsay.

Today is the 78th birthday of Queen Margrethe II of Denmark. 60 years ago, her 18th birthday was celebrated lavishl… twitter.com/i/web/status/9…

Born in 1886 to the Duke and Duchess of Connaught (third son and daughter-in-law of Queen victoria), Princess Patricia was the sister of Crown Princess Margretha of Sweden, and as such is the great aunt of King Carl XVI Gustaf of Sweden, Queen Margrethe II of Denmark, and Queen Anne Marie of Greece. Princess Patricia relinquished her Royal title and style upon her 1919 marriage to Alexander Ramsay. She was thence known as Lady Patricia Ramsay, though she attended grand royal events as a Princess of the Blood Royal. She wore the Honeysuckle tiara at one of those events in the 1950s or 60s. Lady Patricia also wore it at the 18th birthday celebration of her goddaughter, Crown Princess (now Queen) Margrethe of Denmark in 1958.

Lady Patricia died in 1974, and after her death, some of her jewels were auctioned of by her son at Christie’s. Among those jewels was Princess Helena Victoria’s Honeysuckle Tiara, which was sold for £ 12,000 on the 15th of May, 1974. 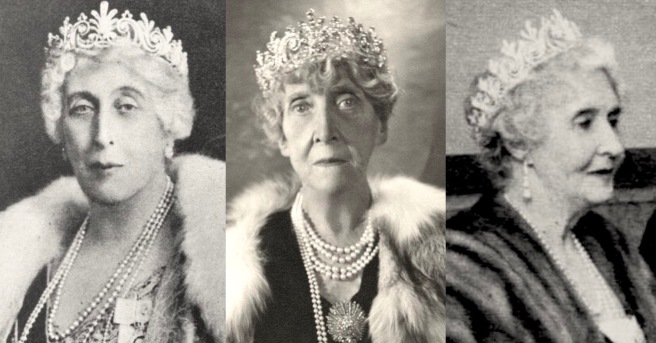