Princess Aiko of Japan, the only daughter of Emperor Naruhito and Empress Masako, marked her Coming-of-Age, 20th Birthday, with a series of ceremonies at the Imperial Palace of Tokyo yesterday, wearing an Evening Gown, a Tiara, and the Order of the Precious Crown for the first time for her Coming-of-Age Audience with her parents, the Emperor and Empress. Instead of a new Tiara and Parure traditionally given to Japanese Princesses for the past two decades, due to the Pandemic, Princess Aiko is borrowing a Mikimoto Diamond Tiara from her aunt, the former Princess Sayako, which we are featuring today!

Consisting of a series of elaborate diamond scrolls,  topped with diamonds, this Tiara was created by the Japanese Jeweller Mikimoto around 1989, with the design modeled after a Tiara also created by Mikimoto around 1920 for Princess Masako Nashimoto, the Crown Princess Yi Bangja of Korea, who passed away months before Princess Sayako’s coming-of-age, thus leading many to speculate it the Tiara was the same one that belonged to Crown Princess Yi Bangja, though there are some minute design differences. Similar to Princess Aiko’s situation, the Coming-of-Age Ceremonies for her aunt, Princess Sayako, were overshadowed by the death of her grandfather, Emperor Hirohito, and the Enthronement of her father, Emperor Akihito, thus the Tiara was paid for by the Emperor’s personal expenses rather than the Imperial Household’s Budget.

Princess Sayako, the Princess Nori first wore her Mikimoto Diamond Tiara for her Coming-of-Age Ceremony in 1990, a year after her 20th Birthday, and also wore the Tiara later that year for Emperor Akihito’s Enthronement Banquet in 1990. Unlike most other Japanese Parures, the Tiara does not have a ‘mirrored’ necklace, and is instead accompanied by a smaller diamond necklace and a pair of simple diamond earrings. 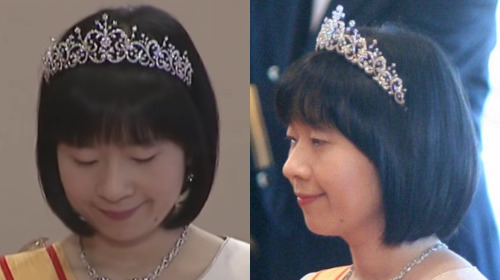 Princess Sayako continued to wear her Mikimoto Tiara for the next 15 years, notably for the annual New Years Receptions, the Dutch State Banquet in 1991, the Belgian State Visit to Japan in 1996, the Norwegian State Visit to Japan in 2001, and the Danish State Visit to Japan in 2004. Japanese Princesses give up their Imperial Titles and leave the Japanese Imperial Family upon marriage, but before that they don their Tiaras one last time for the Rikkoshi no Reimei Ceremony, like Princess Sayako did in November 2005, days before her marriage to Yoshiki Kuroda. As private property, the Tiara remained with the now Sayako Kuroda and while she has attended many formal events, including some State Banquets and the Enthronement Banquet for her brother, Emperor Naruhito, in 2019, she has preferred to wear Kimonos and thus the Tiara has been unworn since 2005.

Princess Aiko wore Princess Sayako’s Mikimoto Diamond Tiara and the Diamond Necklace for the first time at her Coming-of-Age Ceremony yesterday, also wearing it as she went to greet her grandparents, Emperor Akihito and Empress Michiko, and other members of the extended Imperial Family. While it is possible that Princess Aiko may acquire a Tiara of her own at some point in the future, there is no doubt we will continue to see the Mikimoto Diamond Tiara for years to come, likely at the annual New Year’s Reception next month.