Happy Birthday to King Philippe of the Belgians, who turns 58 today! We are launching a new series of articles on the Royal Watcher, following on the success of Royal Tiaras articles last year, we are now going to be featuring Royal Orders and Honours, helping you understand the history and significance of the honours and insignia. First off, the Belgian Royal Orders in honour of King Philippe’s birthday!

But first an explanation of Orders in general- Almost every country, monarchy or not, has some form of an honours system that awards chivalry or merit, and is often used in diplomatic exchange of gifts. Each individual order has it’s own history, and in countries with multiple orders, has it’s own rank. The Head of State is usually the sovereign of the order, and has varied authority on deciding their recipients. National Orders are those which must be awarded with consultation from the government, and are official gifts, while the recipients of Dynastic Orders are at the discretion of the Sovereign, and many non-reigning families still award their Dynastic Orders, with no government authority.

Orders of their own countries are awarded to royals at birth, upon reaching the age of majority, upon marriage into the royal family, or after years of dedicated service to the country. Orders of foreign countries are usually awarded during State Visits, and are given according to rank, with the sovereigns receiving the higher order, the heirs the lower order, and the other members of the royal family participating in the visit receiving yet a lower one. However, these rules vary from country to country, and also depend on individual Sovereigns.

Orders are accompanied by a varied amount of insignia, which can include a Sash with a badge worn at the hip, a Star, ornate Collars, Badges to be worn on the shoulders, and smaller Pins, and the awarding of specific items differentiate the different grades in each individual order, and/or depend on the orders themselves. The wearing of the insignia depends on the occasion. The ornate collars of an Order are only worn very rarely at White Tie events or on Uniforms. The Sash and Star are more common and seen at White Tie State Banquets. The smaller badges may be worn when you are wearing the insignia of other orders, or at a Black Tie occasion where Orders are worn. The small pins are worn at formal occasions in the daytime, when you want to honour the occasion without making it too formal. Now that we have an explanation, lets learn about the Belgian Royal Orders.

Established in 1832, the Order of Leopold is the highest Order in Belgium and was created by King Leopold I, soon after his appointment to the Belgian Throne. Awarded in three divisions and 5 different grades – Grand Cordon, Grand Officer, Commander, Officer, and Knight.The Sash of the Order is solid purple and worn from the right shoulder to the left hip, which the Badge attached to the hip. The Badge features a white-enameled Maltese Cross atop a green enamel wreath of laurel and oak leaves, with central disc, in black enamel, featuring the Belgian lion in gold. On the reverse is the monogram of Leopold I, and both sides are ringed in red enamel with the motto ‘Unity Is Strength’ in gold, in both French and Dutch, topped with a crown.  The Star of the Order is an eight-pointed silver star, with the same central disc as the badge, featuring a gold lion, surrounded by the red ring and the order’s motto. The Order of Leopold has been awarded to all the members of the Belgian Royal Family, and is awarded to Sovereigns and Heads of State on State Visits abroad. You most frequently see it worn by King Philippe at the annual National Day celebrations.

Order of the Crown

The Order of the Crown was created by King Leopold II to recognize distinguished service in the Belgian Congo, and in 1908 was made a national order of Belgium. The second highest order, it awarded for service to the Belgian state, as well as distinguished achievements, and is also divided into five grades. The Sash of the Order is solid maroon, and worn from the right shoulder to the left hip, which the Badge attached to the hip.  The Badge of the Order is a Maltese Cross atop a field of rays in gold. The central disc, ringed in gold, shows a gold crown on a blue enameled background, with the monogram of King Leopold II on the reverse. The badge topped with a green-enameled wreath of oak and laurel. The Star of the Order is a silver 5-pointed star with golden rays between the branches. In the center is a smaller version of the badge. The Order of the Crown is awarded as a lower Order to lesser members of Royal Families. Recent recipients include Crown Princess Mary and Prince Joachim of Denmark, Prince Constantjin, Princess Laurentien, Princess Margriet, and Pieter van Vollenhoven of the Netherlands, and Princess Kiko of Akishno.

Also established by King Leopold II for the Belgian Congo, in 1908, the Order of Leopold II became a Belgian national order, and is awarded for service to the Sovereign, in five classes and three medals. The Sash of the Order is blue with a central black stripe, worn from the right shoulder to the left hip, with the Badge, a Maltese Cross surmounted on a wreath of laurel leaves with central disc featuring a gold lion on a black enamelled background, surrounded by a blue enameled ring with the motto ‘Unity is Strength’ in both French and in Dutch, worn at the hip. The Star of the Order is a faceted silver 5-point star with golden rays between the branches. In the center is a smaller version of the badge. Recent recipients include Princess Marie of Denmark. 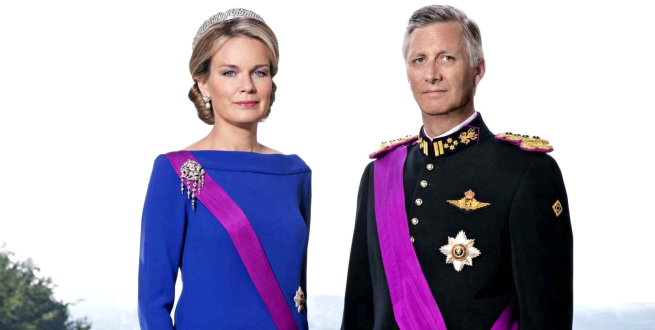