Today marks the 60th Anniversary of the Death of Queen Maria of Yugoslavia, who died on this day in 1961! The Romanian Princess who married the first Yugoslavia King that was assassinated and later became the mother of the last King of Yugoslavia before spending decades in exile in the United Kingdom, Queen Maria lived a fascinating life, and possessed an intriguing jewellery collection, the most striking piece from which was her Gold Cross Tiara!

A striking tiara in solid gold featuring flower motifs and a large Orthodox Cross in the Kokoshnik style, this diadem was reportedly made for Queen Marie of Romania in late 1910s, after she had lost her jewels in Russia during the First World War. In 1922, she gave the Gold Cross Tiara as a Wedding Gift to her daughter, Princess Maria when she married King Alexander I of Yugoslavia, who notably wore the piece for a series of portraits soon after, with her Emerald Sautoir.

After being widowed in 1934, Queen Maria lived relatively normal life in the United Kingdom, which coupled with WWII and the subsequent exile of the Yugoslavian Royal Family meant that the Emerald Kokoshnik Tiara and Diamond Fringe Tiara had to be sold, but it seems she held on to the Gold Cross Tiara. After Queen Maria’s death in 1960, the Tiara was likely inherited by her younger son, Prince Andrej, but not publicly worn by any of his three wives, which included Princess Christina Margarethe of Hesse ​and Princess Kira of Leiningen. The Gold Cross Tiara was notably worn by Princess Brigitta, wife of Prince Karl Vladimir, Prince Andrej’s son, for an event in the late 2000s.

The Gold Cross Tiara is currently on display at a Museum attached to the Yugoslavian Royal Mausoleum in Oplenac, and was displayed when Queen Maria’s coffin was reburied in Serbia in 2013. It is not known it it belongs to the Museum or is on permanent loan from the family. UPDATE: The Tiara belongs to the Museum and was loaned to Princess Brigitta.

While not as much of an iconic symbol of Queen Maria like the Emerald Kokoshnik Tiara, her series of portraits have seared the piece into popular imagination and it has been recreated to be worn by an actress playing Queen Maria in a Serbian film. 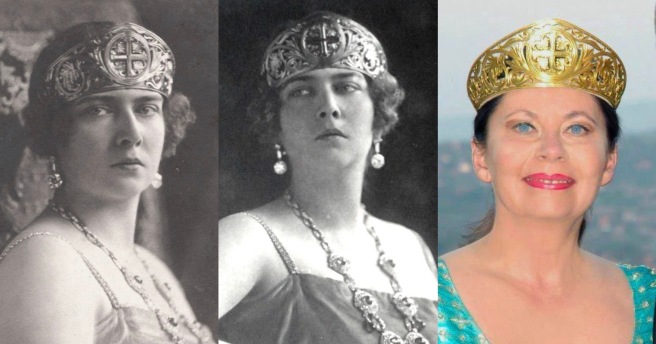 One thought on “Queen Maria of Yugoslavia’s Gold Cross Tiara”