Happy Birthday to Queen Anne Marie of Greece, who turns 74 today! The youngest daughter of King Frederik IX of Denmark and Princess Ingrid of Sweden, she married King Constantine II of Greece in 1964. Despite being exiled for more than five decades, as the sister of Queen Margrethe II of Denmark, sister-in-law of Queen Sofia of Spain, cousin of King Carl XVI Gustaf of Sweden, King Harald V of Norway, and the Duke of Edinburgh, Queen Anne Marie attends a plethora of glittering events, where she wears pieces from her historic jewel collection, including her Van Cleef & Arpels Ruby Parure-

Made by Van Cleef & Arpels in 1961 in Paris, Ruby Necklace also includes a Bracelet and a Brooch, and was reportedly given as an engagement gift from Crown Prince Constantine of Greece to Princess Anne-Marie of Denmark in 1963

Queen Ingrid of Denmark , Princess of Sweden with her three daughters, Princess Benedikte, Princess Anne Marie and Crown Princess Margrethe. This picture was taken in Denmark 🇩🇰 days before the entire danish Royal Familly traveled to Greece 🇬🇷 to marry the youngest of it’s Princesses.

The greek royal couple, three days before their wedding, at a reception in Tatoi Palace, held for 6,000 greeks. Princess Anne Marie was starting her official duties as soon to be Queen of the Hellenes #kingconstatine #queenannemarie #greekroyals #greekroyalfamily #tatoipalace

Their Majesties the former King and Queen of the Hellenes, Prince and princess of Denmark. Princess Anne Marie of Denmark was her distant cousin's Crown Prince Constantine of Greece, Prince of Denmark, fiance and upon the prince's father HM King Paul I of the Hellenes death Constantine became His Majesty Constantine II the King of the Hellenes, Princess Anne Marie then to marry the Corwn Prince junped the "Crown Princess of Greece" and became officially HM the Queen of The Hellenes. . #AnneMarieofGreece #queenofthehellenes #queenannemarie #queenannemarieofgreece #constantineII #kingconstantineII #kingofthehellenes #greece #hellenic #greek #danish #hellene #GreekMonarchy #Monarchy #DanishMonarchy #DanishRoyalFamily #RoyalFamily #GreekRoyalFamily

After her marriage and their exile from Greece, Queen Anne Marie continued to wear her Van Cleef & Arpels Ruby Necklace, most notably for the Wedding of her cousin, King Carl XVI Gustaf of Sweden, in 1976 and also on the cover of Point de Vue Magazine in 1981. A similar necklace was sold at Auction in 2006,  but it appears the Van Cleef & Arpels Ruby Necklace still resides in Queen Anne Maries’ jewellery box, but with Queen Anne Marie’s granddaughter, Princess Olympia, starting to attend royal events these days, we may hopefully see this necklace soon. 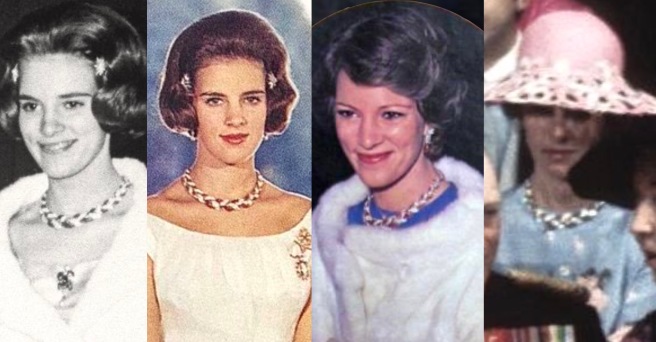