Today marks the Anniversary of the Birth of Anne Parsons, Countess of Rosse, the mother of Antony Armstrong-Jones, Lord Snowdon, mother-in-law of Princess Margaret, and one of the founders of The Victorian Society. One of the society beauties of her day, the Countess attended a plethora of glittering events, often wearing the glittering Emerald Parure we are featuring today-

The magnificent emerald and diamond Rosse tiara. This superb piece was made circa 1885, probably in London and is unusual being in a modified Russian Kokoshnik style. It is worn here in 1960 by Anne, Countess of Rosse (Her black and white organza gown is by Victor Stiebel), at a ball held at Buckingham palace to celebrate the marriage of her son, the photographer, Anthony Armstrong-Jones (from her first marriage to Ronald Armstrong-Jones) to Princess Margaret. Anthony was later created The Earl of Snowdon. She was instrumental in forming The Victorian Society in 1958 which encouraged the study, appreciation and preservation of Victorian and Edwardian architecture and art, much of which was being rapidly destroyed in the post war rush to modernity. She died in July 1992. #emerald #bringbackthetiara #diamonds #tiara #snowdon #russian #kokoshnik #rosse #elegant

Made around 1885, in London, the Rosse Emerald Tiara features a unique set of pear-shaped emeralds sen in an unusual modified Kokoshnik style. The parure includes an accompanying necklace, earrings, and a large brooch.

While images of the Countesses of Rosse are very rare to come by (it took over two years to compile all of these), the Tiara was worn by Frances Lois, the 5th Countess at the Coronation of King George V in 1911. She was widowed in 1918, and remarried to the Viscount de Vesci, whose Heir later married the stepdaughter of her son. A huge credit goes to Beth from HRJCMB for her help.

The Parure was worn by her daughter-in-law, Anne, Countess of Rosse in a portrait in the 1930s, quite soon after her marriage to the 6th Earl of Rosse in 1935, which came a year after her divorce from Ronald Armstrong-Jones. 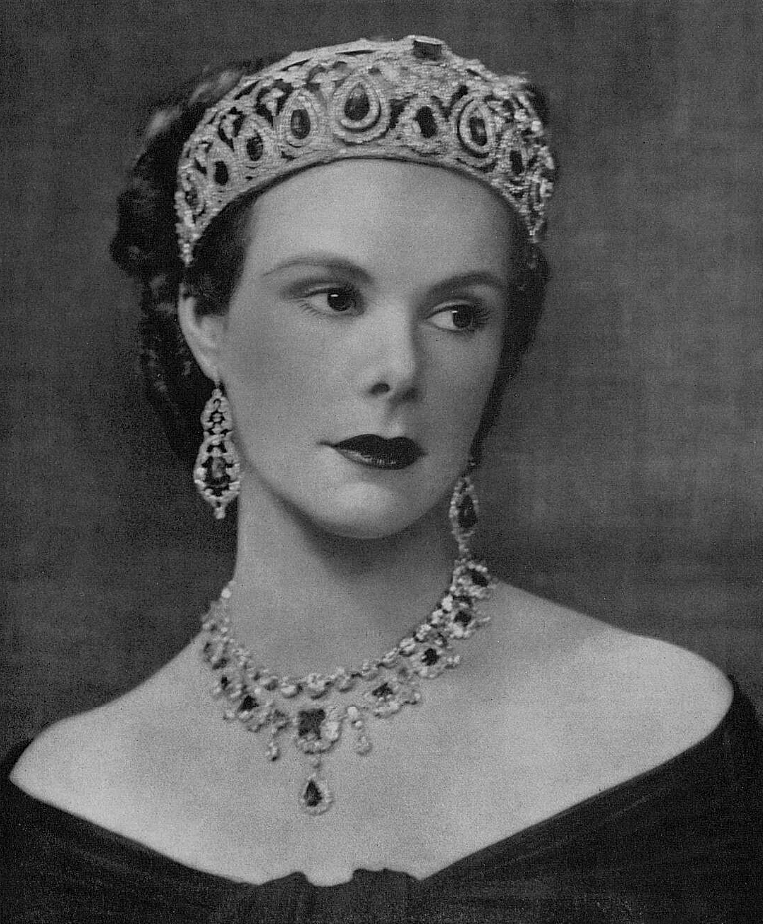 The Countess notably wore the Rosse Emerald Tiara and Parure at the Coronation of King George VI in 1937 and the Coronation of Queen Elizabeth II in 1953. She also created an impression at a Gala Performance at Covent Garden in honour of the French President’s State Visit in 1950, when the jewels of the British Peeresses greatly impressed the visiting French Dignitaries.

The Countess of Rosse wearing the Rosse Emerald Tiara at Princess Margaret's Wedding Ball in 1960!… twitter.com/i/web/status/1…

Even more notably, the Countess of Rosse wore the Emerald Tiara and Parure with her Victor Stiebel gown at a Ball hosted by the Queen at Buckingham Palace ahead of the wedding of her son and Princess Margaret in 1960. The following day, the Countess wore the large emerald brooch for the Wedding at Westminster Abbey.

The Rosse Emerald Tiara and Parure hasn’t been . UPDATE– Celebrated author Vincent Meylan writes that the Tiara and Necklace were sold separately at Christie’s sometime in the 1980s. The earrings, now set with Amethysts are being sold at Bonhams in 2020.

Two Bracelets belonging to the Countess of Rosse, the mother-in-law of Princess Margaret, will be sold at auction… twitter.com/i/web/status/1…