Today’s tiara belongs to the Kent branch of the British Royal Family. The Kent Diamond and Pearl Fringe Tiara first appeared on Katherine, Duchess of Kent in the 1970s, but is thought to have been a modified version of the crochet bandeau tiara once owned by Queen Mary. The tiara has also been worn by the Countess of St. Andrews and Lady Helen Taylor, daughter-in-law and daughter of the Duchess.

Originally bought by Queen Mary in the 1920s, and later fitted for some of her Cambridge emeralds on top, the crochet bandeau tiara was inherited by Princess Marina, Duchess of Kent on the death of her mother-in-law, Queen Mary, in 1953. In the 1950’s, she lent the piece to her daughter, Princess Alexandra, for a couple of occasions. In 1961, when her son, the Duke of Kent, married Katherine Worsley, Princess Marina gave the tiara as a wedding gift to her daughter-in-law. The new Duchess wore the tiara frequently during the 1960 & 70s, including at her wedding and at State Events before she inherited the other Kent jewels after the death of Princess Marina in 1968. 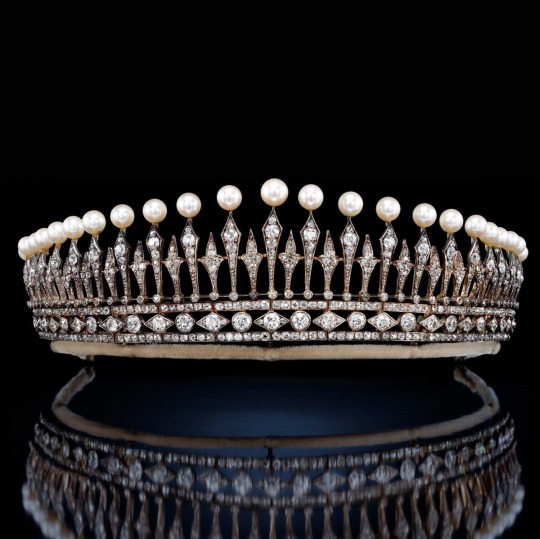 The Diamond and Pearl Fringe Tiara became the Duchess of Kent’s most worn tiara during the 1980s & 90s, especially after the sale of the Cambridge Sapphire Tiara. She wore it to State Opening’s of Parliament and at a Banquet given by the King of Malaysia in 1993.

The Diamond and Pearl Fringe Tiara was worn by Sylvana, Countess of St Andrews, daughter in-law of the Duke and Duchess of Kent, and wife of the heir to the Dukedom, who wore the tiara at an event in the 1990s.

The tiara was also worn by Lady Helen Windsor, daughter of the Duke and Duchess of Kent, at her 1992 Wedding to Tim Taylor. She wore the Diamond and Pearl Fringe Tiara with her Catherine Walker gown that had been embroidered based on the design of the tiara.

The Diamond and Pearl Fringe Tiara hasn’t been seen since the late 1990s, since Katherine, Duchess of Kent has mostly retired from the royal life and no longer attends tiara events, and her daughter & daughter-in-laws don’t undertake royal duties or attend royal events. However, it might be seen soon at weddings, or at the next Coronation.

The Kent Pearl and Diamond Fringe Tiara on display at 'Power & Image: Royal & Aristocratic Tiaras' at Sotheby’s in… twitter.com/i/web/status/1…

The Tiara is currently on display at ‘Power & Image: Royal & Aristocratic Tiaras’ at Sotheby’s in London