President Georges Pompidou and First Lady Claude Pompidou hosted the Queen and Duke of Edinburgh on the second of their five State Visits to France on this day in 1972, following their previous State Visit in 1957.

On the first evening, President Georges Pompidou and First Lady Claude Pompidou hosted a State Banquet for the Queen (wearing the Vladimir Tiara, Duchess of Gloucester’s Pendant Earrings, and Queen Victoria’s Golden Jubilee Necklace) and Duke of Edinburgh in the Petit Trianon of the Palace of Versailles, following a Gala Performance in the Palace Theatre.

At the end of the State Visit, the Queen (wearing Queen Alexandra’s Kokoshnik Tiara) and Duke were joined by President Georges Pompidou and First Lady Claude Pompidou for a Equestrian Show “Le Cadre noir de Saumur” at the Champs de Mars, ahead of the Return Banquet at the Hôtel de Charost, the official residence of the British Ambassador in Paris.

Two days later, the Prince of Wales joined the Queen and Duke of Edinburgh on a visit to the terminally-ill Duke and Duchess of Windsor at the Villa Windsor in the Bois de Boulogne near Paris, which came just ten days before the former King’s death. The Queen and Duke also visited a horse race meeting at the Longchamp racecourse. 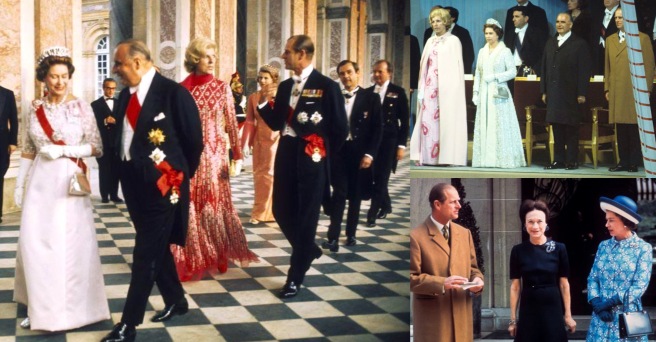