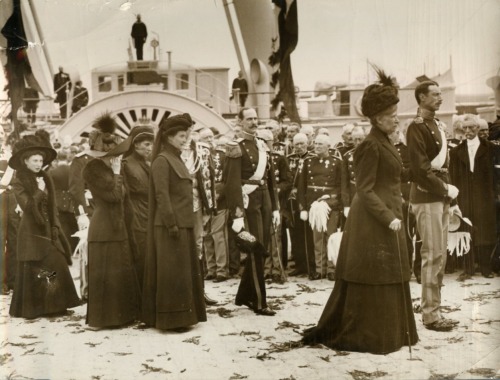 The Danish Royal Family preside over the Funeral of King Frederick VIII of Denmark on this day in 1912, after his sudden death on a bench in Hamburg. Arriving in Denmark on the Royal Yacht Dannebrog, the Coffin was taken to the Christiansborg Palace Church for the Lying-in-State before being transported to Roskilde Cathedral for the Funeral. Dowager Queen Lovisa was joined by King Christian X and Queen Alexandrine of Denmark, King Haakon VII and Queen Maud of Norway, Prince Carl and Princess Ingeborg of Sweden, Princess Dagmar and Princess Thyra of Denmark, alongside members of the extended Danish Royal Family and Foreign Guests that included King George I of Greece (the brother of King Frederick) and King Gustav V of Sweden, while a tragic absence was the King’s nephew, the Hereditary Prince of Hanover, who died in a car accident on the way to the Funeral.