Today marks the 150th Anniversary of the Birth of Princess Margaret of Prussia, Landgravine of Hesse, who was born on this day in 1872! The granddaughter of Queen Victoria and sister of Kaiser Wilhelm II, who was also a short-time Queen consort-elect of Finland, Princess Margaret had a splendid jewellery collection, which met a tragic fate, among which was this Fleur-de-Lys Tiara!

Have you heard about the Hesse Crown Jewels heist? It’s a piece of history that reads like a movie script! At the e… twitter.com/i/web/status/1…

But first lets learn about Princess Margaret of Prussia, Landgravine of Hesse! The youngest child of Emperor Frederick III and Victoria, Princess Royal, she was a granddaughter of Queen Victoria, and a sister of Kaiser Wilhelm II and Queen Sophia of Greece. In 1893, Princess Margaret married Prince Frederick Charles of Hesse, the Heir of his brother, the Landgrave and Head of the House of Hesse-Kassel. The couple had six sons, including two sets of twins, but sadly the elder two died during the first World War, while the youngest son, Prince Christoph, died during the Second World War. Two daughters-in-law, Princess Mafalda of Savoy, and Princess Marie Alexandra of Baden also died during the War. The family resided at Schloss Rumpenheim before inheriting Schloss Friedrichshof from Empress Frederick. In 1918, the Prince accepted the offer of the throne of newly independent Finland, becoming the Queen Consort for around two months before the throne was renounced. After the misfortunes of the Second World War, Princess Margaret remained the matriarch at the Head of the Family, only to discover that the family jewels had been stolen by Americcan soldiers who had taken over Schloss Friedrichshof, with the aged Princess being ccalled to testify when the culprits were discovered in 1951. 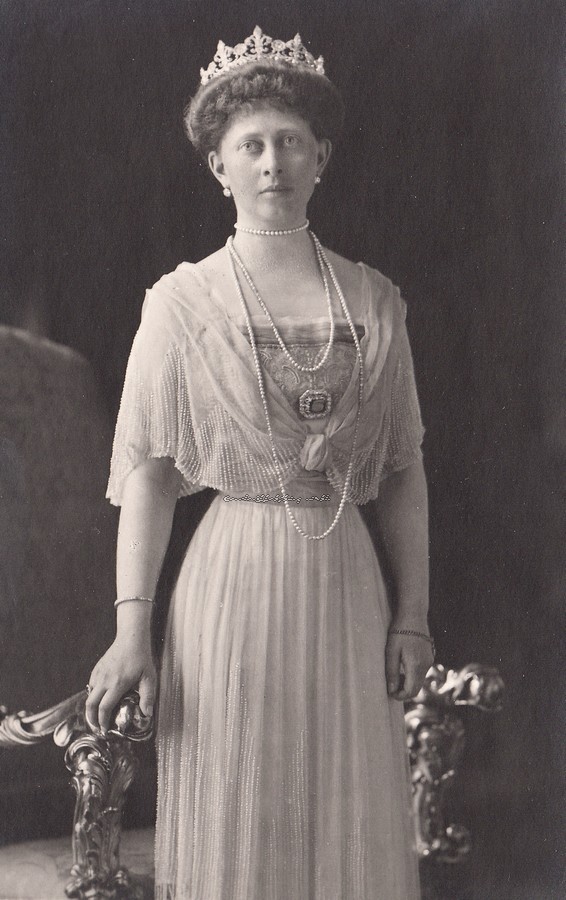 Consisting of diamond Fleur de Lys and Heraldic Roses, this Tiara was made by Garrard for Empress Frederick, who left it to Princess Margaret upon her death in 1901, along with Schloss Friedrichshof. Princess Margaret was notably pictured wearing the Tiara in a portrait taken in the 1910s.

In 1930, the Fleur-de-Lys Tiara was loaned by Princess Margaret to Princess Sophie of Greece and Denmark when she married her sixth son Prince Christoph of Hesse, described as:

Princess Freidrick Karl of Hesse-Kassel, her future mother-in-law, loaned her the Empress Frederick’s diamond tiara as a final adornment to her bridal gown.

After the Second World War, the Hesse Family Jewels were buried at Schloss Friedrichshof, being used as a club by American Soldiers, when they were discovered and stolen by the American club manager and her future husband. The theft not discovered until Princess Sophie was preparing for her second marriage in 1945, and while the culprits were found, only 10% of the jewels were returned in 1951, which included the Hesse Ears of Wheat Tiara, but the fate of the Fleur-de-Lys still remains a mystery.