Today marks the Anniversary of the Birth of Queen Alexandra of the United Kingdom, who was born on this day in 1844! The Danish Princess who was the longest-serving Princess of Wales and then a trendsetting Queen Consort, to mark the occasion, we are featuring Queen Alexandra’s Edwardian Choker:

Queen Alexandra wearing her Edwardian Choker on the Russian Imperial Yacht Standart during the Cowes Regatta in 190… twitter.com/i/web/status/1… 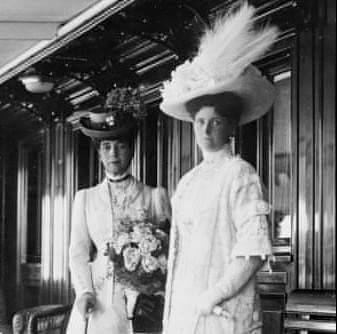 Composed of a series of delicate diamond swags and circles, with a small diamond suspended from the central circle, this Choker is set on a band of velvet and while the provenance is unknown, it was probably acquired by Queen Alexandra during the first decade of the 20th century, reflecting the motifs of the time. Queen Alexandra was notably pictured in the Edwardian Choker on the Russian Imperial Yacht Standart during the Cowes Regatta in 1909, and later at the Royal Horticultural Society’s Spring Show in 1914, and a few months later in a portrait released for her 70th Birthday.

After Queen Alexandra’s death in 1925, the Edwardian Choker remained unworn until 1971, when Princess Anne wore it with her Diamond Star Brooch as she presented the Society of Film and Television Arts Awards (the predecessor of the BAFTAs) at the Royal Albert Hall.

The last public appearance of Queen Alexandra’s Edwardian Choker came in 1973, when newlyweds Princess Anne and Captain Mark Phillips attended an Official Dinner hosted by the Governor General of Jamaica in Kingston, during their extensive Honeymoon around the Caribbean. Princess Anne is not averse to jewellery surprises and debuted Empress Maria Feodorovna’s Sapphire Brooch a few days ago, so lets hope this stunning Choker makes a reappearance soon!