Today marks the Anniversary of the Birth of Queen Maud of Norway, who was born on this day in 1869! The British Princess who married a Danish Prince and became the first Queen of an independent Kingdom of Norway, QUeen maud possessed some splendid jewels, so to mark the anniversary, we are featuring her Diamond Brooch:

When Princess Maud of Wales married Prince Charles of Denmark in 1896, she received a plethora of glittering jewels, including a ‘Diamond Star Brooch’ from her groom Prince Charles, which does not look much like a conventional Diamond Star but appears to be an artful interpretation.

After becoming Queen of Norway in 1905, Queen Maud notably paired the ‘Diamond Star’ Brooch with her Pearl and Diamond Tiara, for a series of Official Portraits taken in 1913, which appear to be one of its rare photographed appearences on the Queen. In 1938, Queen Maud brought all her jewels with her to England while she was having an operation, and where she passed away of heart failure (also on this day). Queen Maud’s jewels remained in England, throughout the Norwegian Royal Family’s exile during WWII, and were only reclaimed during a visit for the Queen’s Coronation in 1953.

A post shared by Royal Jewels of Norway (@royals__norway)

The following year, Queen Maud’s daughter-in-law, Crown Princess Martha passed away, and much of the Norwegian Royal Jewellery Collection was then in the possession of Princess Astrid, who served as the First Lady of the Norwegian Court for her grandfather and then her father, notably pairing Queen Maud’s Diamond Brooch with Queen Josefina’s Diamond Tiara for the Danish State Visit to Norway in 1960.  The Norwegian Royal Jewels were only divided up following the wedding of then Crown Prince Harald in 1968, when the jewels were split between the King and his two sisters. 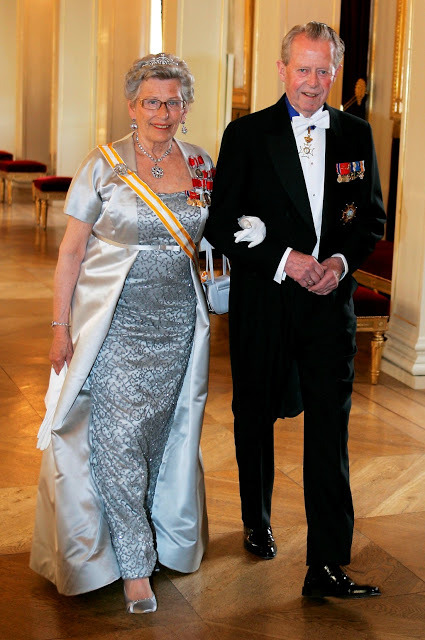 A post shared by Royal Jewels of Norway (@royals__norway)

Queen Maud’s Diamond Brooch was among the jewels given to Princess Astrid, and it continues to be worn rather sparsely, notably paired in recent years with the Vasa Tiara for the Spanish State Visit to Norway in 2006. There is no doubt we will continue to see this Royal Heirloom for years to come!