Today marks the 5th Anniversary of the Death of Raine, Countess Spencer, who died on this day in 2016! The ‘Triple Countess’ who was the stepmother of Diana, Princess of Wales, the Countess had access to many splendid jewellery collections, but today’s piece, her versatile Pearl and Diamond Tiara, was a part of her personal jewellery collection!

The daughter of Alexander McCorquodale, an army officer who was heir to an old printing fortune, and the romantic novelist and socialite, Dame Barbara Cartland, Raine McCorquodale spent the second World War in Canada and grew up to be the debutante of the year in 1947, marrying the Hon. Gerald Legge the following year, who became the Earl of Dartmouth in 1962. The Earl and Countess had four children, including the current Earl of Dartmouth and the Duchess of Carcaci, before their divorce in 1976. The youngest member of Westminster City Council as a Conservative, she remained active in local government, sitting on Westminster’s town planning, parks and personnel committees, and was later elected to represent Lewisham South on the London County Council, then Richmond on the Greater London Council, taking a special interest in environmental planning and ancient buildings. In 1976, Raine, Countess of Dartmouth married the 8th Earl Spencer, becoming the stepmother of among others, to the future Diana, Princess of Wales, who referred to her as ‘Acid Raine’. Countess Spencer’s redecoration and restoration of the family seat, Althorp House, was equally unpopular among her stepchildren and conservationists. Following, Earl Spencer’s death in 1992, the Dowager Countess was thrown out of Althorp with her designer clothes in bin bags, but received a £4 million inheritance and a townhouse in Mayfair. In 1993, Raine, Countess Spencer married Count Jean-François Pineton de Chambrun, a marriage which only lasted until 1995, when ‘Countess Jean-François Pineton de Chambrun’ reverted to her previous style of ‘Raine, Countess Spencer’. Towards the end of her life, the Countess reconciled with Diana, Princess of Wales, and was invited to her funeral, later being called to give evidence at the inquest into her death in 2007. Living a Society life until the end, Raine, Countess Spencer passed away in London in 2016. 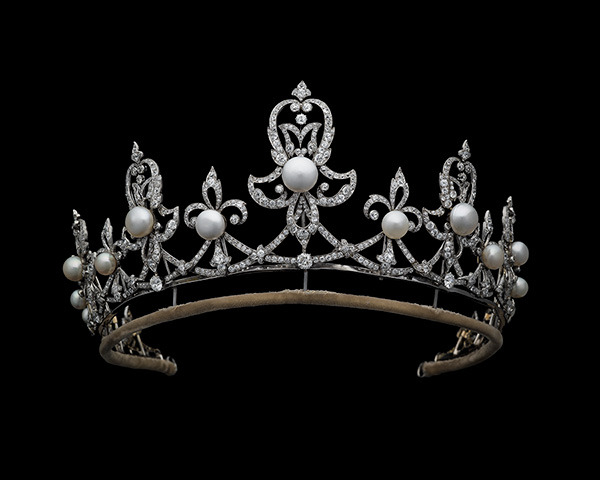 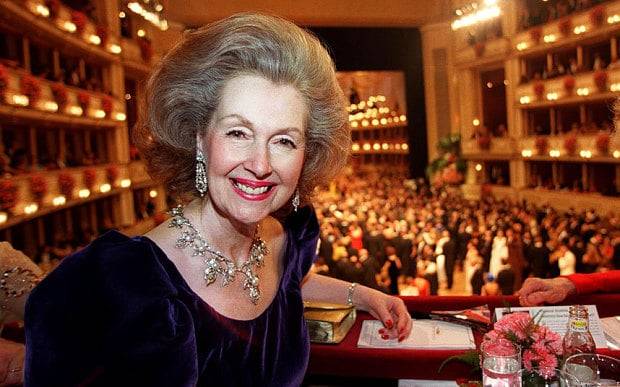 Featuring large button pearls in an antique victorian frame, the tiara, which is convertible to be worn as a necklace, likely originates from the collection of Dame Barbara Cartland, or was bought from her Spencer Inheritance since it was only worn by Raine, Countess Spencer after the end of her three marriages. ne of the earliest appearences of the piece (as a necklace) was at the Opera Ball in Vienna in 1998.

In 2002, Raine, Countess Spencer wore the Pearl and Diamond Tiara at the Return Banquet hosted by Queen Margrethe II of Denmark at the Natural History Museum in London, during her State Visit to Britain.

Lady Spencer also wore her Pearl and Diamond Tiara for the Lord Mayor of London annual Banquet at Mansion House in 2002, paired with her antique diamond earrings, a diamond riviere, and a large pendant.

The tiara was worn as a necklace by Raine, Countess Spencer as she attended the ‘Some Enchanted Evening Party and Fashion Show’, in aid of the Galapagos Conservation Society, at The Chelsea Physic Garden in London in 2004.

The Pearl and Diamond Tiara of Raine, Countess Spencer on display in the Victoria & Albert Museum's "Pearls" Exhibi… twitter.com/i/web/status/1…

The Tiara was displayed in the Victoria & Albert Museum’s “Pearls” Exhibition in 2013 and 2014, but was sold soon after to the Albion Art Collection, where it presumably still resides.

As the Hon. Gerald Legge, then Viscountess Lewisham and finally Countess of Dartmouth, Raine often wore a delicate diamond latice Tiara, most notably for her first wedding and a Gala at the Royal Academy of Art in 1956, and as Countess Spencer, she notably wore the Spencer Honeysuckle Tiara for the Wedding Ball of the Prince of Wales and Lady Diana Spencer in 1981.

I always deliberately dressed up and wore all my jewellery and furs – after all everyone knows I have them.”