Today, on what would have been our Mother’s 60th birthday, we remember her love, strength and character – qualities… twitter.com/i/web/status/1…

🔴 The statue is based on the final period of Princess Diana's life as she "gained confidence" in her humanitarian r… twitter.com/i/web/status/1…

The Duke of Cambridge and the Duke of Sussex unveil of a statue of Diana, Princess of Wales in the Sunken Gardens a… twitter.com/i/web/status/1…

Prince William, Duke of Cambridge and Prince Harry, Duke of Sussex attended a small event to mark the unveiling of a statue they commissioned of their mother, Diana, Princess of Wales, in the Sunken Garden at Kensington Palace on July 1st, on what would have been her 60th Birthday. In addition to the two Dukes, Earl Spencer, Lady Fellows, and Lady Sarah McCorquodale, attendees included members of the sculpture committee, the sculptor Ian Rank-Broadeley, and designer Pip Morrison. The statue was commissioned by the brothers in 2017. Prince William and Prince Harry said:

Today, on what would have been our Mother’s 60th birthday, we remember her love, strength and character – qualities that made her a force for good around the world, changing countless lives for the better.

Every day, we wish she were still with us, and our hope is that this statue will be seen forever as a symbol of her life and her legacy.

Thank you to Ian Rank-Broadley, Pip Morrison and their teams for their outstanding work, to the friends and donors who helped make this happen, and to all those around the world who keep our mother’s memory alive.

Diana, Princess of Wales, in addition to her work and the impact she had on so many people. The figure of Diana, Princess of Wales is surrounded by three children who represent the universality and generational impact of the Princess’s work. The portrait and style of dress was based on the final period of her life as she gained confidence in her role as an ambassador for humanitarian causes and aims to convey her character and compassion. Beneath the statue is a plinth engraved with the Princess’s name and the date of the unveiling. In front of the statue is a paving stone engraved with an extract after the poem ‘The Measure of A Man’ which featured in the programme for the 2007 memorial service for the Princess:

“These are the units to measure the worth

Of this woman as a woman regardless of birth.

Not what was her station?

But had she a heart?

How did she play her God-given part?”

The bronze statue was sculpted by Ian Rank-Broadley and is 1.25x life size. It was cast by Castle Fine Arts Foundry in the traditional “lost-wax” process with a patina of a bluish green over black. The cast is hollow and is supported by a stainless-steel armature. Ian Rank-Broadley said:

“Diana, Princess of Wales was an icon who touched the lives of people right around the world, so it has been a privilege to work alongside Prince William and Prince Harry on this statue which commemorates her life.

“We wanted to capture her warmth and humanity while showcasing the impact she had across generations.  I hope that people will enjoy visiting the statue and the Sunken Garden, and taking a moment to remember the Princess.”

Ahead of the unveiling of the statue of Diana, Princess of Wales at Kensington Palace today, details of the newly r… twitter.com/i/web/status/1…

Ahead of the unveiling of the statue of Diana, Princess of Wales at Kensington Palace, details of the newly redesigned Sunken Garden in which the statue will stand were released. The Sunken Garden will be the permanent home of the statue and was one of the Princess’s favourite locations. The layout and planting scheme has been designed by Pip Morrison and created by the Gardens and Estates team at Historic Royal Palaces (HRP), led by Deputy Head of Gardens and Estates, Graham Dillamore. The Press Release states:

The new design for the garden by Pip Morrison retains the historic structures within a simplified layout of deeper flower borders and a more generous lawn around the pool to create a calmer and more reflective setting for the statue. The planting design features a number of the Princess’s favourite flowers, including forget-me-nots, as well as many other spring and summer blooms in a variety of pastel shades.

Work on the garden began in October 2019, and since then five gardeners – led by Deputy Head of Gardens and Estates at Historic Royal Palaces, Graham Dillamore – have spent a total of 1,000 hours working on planting.More than 4.000 individual flowers have been planted, including:

• over 200 roses, of five varieties including Ballerina and Blush Noisette

• 300 tulips, of three varieties including White Triumphator and China Pink

More than 400m of fine, short cut turf has also been laid.

Pip Morrison, who designed the new layout of the garden, said: “This has been a very special project to work on, as the Sunken Garden was a favourite place of Diana, Princess of Wales. We have worked carefully to ensure that the new layout and planting scheme compliments the statue, providing a calming place for people who visit Kensington Palace to remember the Princess.”

Graham Dillamore, Deputy Head of Gardens and Estates at Historic Royal Palaces, said: “While she was in residence at Kensington Palace, Diana, Princess of Wales regularly admired the changing floral displays in the Sunken Garden and would always stop to talk with me and the other gardeners who cared for it.

“Over three decades later, I’m honoured to have been part of the team preparing the garden for the installation of this statue. We’ve incorporated a number of the Princess’s favourite flowers into the design, and I hope that visitors to the palace and gardens will enjoy its peaceful setting, and take a moment to reflect on the life and legacy of the Princess.”

The Sunken Garden was created in 1908 at the instigation of King Edward VII, in an area of the palace gardens previously occupied by potting sheds and greenhouses. The layout of the garden takes inspiration from the 17th-century Dutch-style Pond Garden at Hampton Court Palace.

To mark the 20th anniversary of the death of Diana, Princess of Wales in 2017, the garden was temporarily renamed ‘The White Garden’ and planted with flowers in white and soft pastel colours, which took inspiration from items from the Princess’s wardrobe then on display in the palace. Designed to be viewed from the Cradle Walk, the garden and statue of Diana, Princess of Wales will be free to view during Historic Royal Palaces’ opening hours. 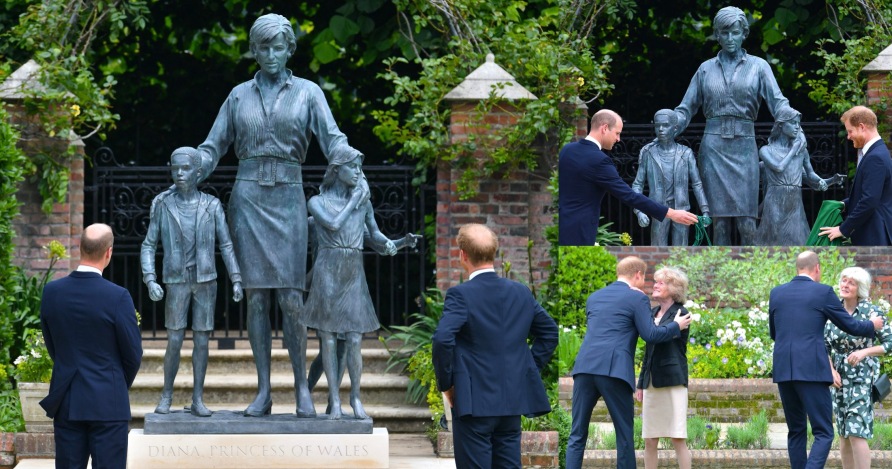