Today marks the 125th Anniversary of the Birth of the Nadejda Mountbatten, Marchioness of Milford Haven, who was born on this day in 1896! The morganatic member of the Russian Imperial Family who married a Battenberg Prince that became a British Marquess, becoming closely related to the British Royal Family, as the aunt of the Duke of Edinburgh. To mark the anniversary of the fascinating Marchioness. we are featuring the magnificent Milford Haven Ruby Kokoshnik!

But first, lets learn about her! The second daughter of Grand Duke Michael Mikhailovich of Russia, a grandson of Tsar Nicholas I of Russia, and his morganatic wife Countess Sophie von Merenberg, herself a granddaughter of the Duke of Nassau and Alexander Pushkin, Countess Nadejda de Torby was born in Wiesbaden and grew up between Cannes and various country houses in the United Kingdom, in the midst of royal circles from around Europe, including her sister, Lady Zia Wernher, and cousins Queen Alexandrine of Denmark and Crown Princess Cecilie of Prussia, despite being barred from Russia as a result of her parents marriage. In 1916, Countess Nadejda married Prince George of Battenberg, the son of Prince Louis of Battenberg and Princess Victoria of Hesse, becoming the sister-in-law of Queen Louise of Sweden, Princess Alice of Greece, and Earl Mountbatten. The couple had two children, the 3rd Marquess of Milford Haven and Lady Tatiana Mountbatten, and after giving up their German titles, became the Earl and Countess of Medina until succeeding to the Marquessate in 1921. The Marchioness became close to her sister-in-law, Countess Mountbatten, and they traveled around the world. As the aunt of the Duke of Edinburgh, she was also often present at British Royal Family occasions through the years until the Dowager Lady Milford Haven died in Cannes in 1963, at the age of 66. 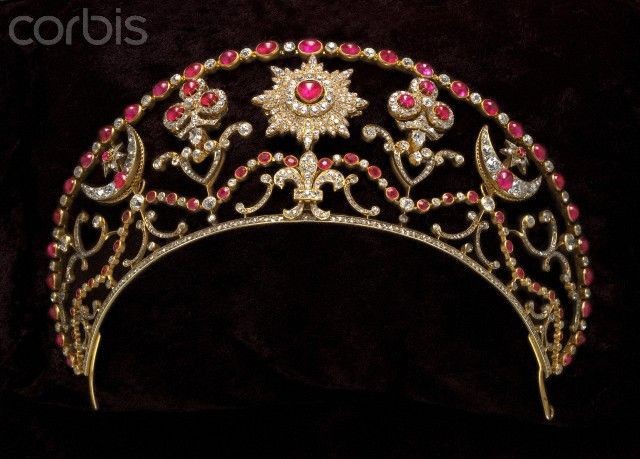 Featuring faceted and cabochon rubies and diamonds in the form of trefoils, stars, fleur-de-lys, and crescents in the form of a Russian Kokoshnik, with elements that can be detached and worn as brooches, the Tiara was made by Bolin, the Russian Court Jeweller, around 1890. The Kokoshnik was given by Grand Duke Michael Mikhailovich and Countess Sophie as a wedding gift to Countess Nadejda in 1916 and an identical tiara featuring sapphires instead of rubies was later given as a wedding gift to Countess Nadejda’s younger sister, Lady Zia, who married Sir Harold Wernher.

Nadejda Mountbatten, Marchioness of Milford Haven wearing the the Milford Haven Ruby Kokoshnik at the Coronation of… twitter.com/i/web/status/1…

After receiving the Bolin Tiara as a wedding gift, the Marchioness of Milford Haven was notably pictured wearing the Ruby Kokoshnik Tiara at the State Opening of Parliament in 1924, and at the Coronation of King George VI and Queen Elizabeth in 1937, when she also wore a massive cabochon ruby pendant which was probably inherited from her Romanov family.

Unlike many other family jewels that were sold over the years, the Ruby Kokoshnik Tiara continued down the family from the 2nd Marchioness to her son, the 3rd Marquess, and then his son, the 4th Marquess, and was worn by Penelope Thompson when she married Lord Ivar Mountbatten in 1994. Princess Margaret helped “Penny to stick pins into her hair to help keep the giant family tiara from toppling off”. Neither of the current Marquesses wives have been publicly pictured wearing the Ruby Kokoshnik.

However, at some point in the years since, the family sold the Ruby Kokoshnik Tiara and since then, it has passed through several owners to the current owner, a Russian businessman. The Tiara has been displayed at exhibitions in recent years, including at the Hermitage Museum in St. Petersburg in 2004.