Today marks the 125th Anniversary of the Birth of Queen Tadj ol-Molouk of Iran, who was born on this day in 1896! The Brigadier’s daughter who became the Queen of Iran, and then the matriarch behind Shah Mohammad Reza Pahlavi of Iran, Queen Tadj ol-Molouk was a prominent public figure in Iranian National life and there is no better way to honour her than by taking a look at her splendid Diamond Tiara!

But first lets learn about Queen Tadj ol-Molouk! Born Nimtâj Âyromlu as the daughter of Brigadier General Teymur Khan Ayromlou, in Baku in the Russian Empire, emigrating to Persia during the First World War, when she married Reza Shah, a soldier who took over Iran in a coup in 1921 and declared himself the Shah of Persia after deposing the Qajar Dynasty, making her Queen Tadj ol-Molouk ‘Crown of the Kings’, as the most senior of his four wives, and the mother of his heir, Crown Prince Mohammad Reza Pahlavi. Queen Tadj ol-Molouk was one of the first Persian Queens to have a public presence and played a major role in the Kashfe hijab (ban of the veil) in 1936, the first time an Iranian Queen showed herself in public. During Reza Shah’s reign she did not have political influence, but after he was forced into exile in 1941, she became a major force at the court of her son, Shah Mohammad Reza Pahlavi, being a dominating force behind the brake-up of his first two marriages, and raising Princess Shahnaz. After the death of Reza Shah, she remarried to Gholam Hossein Sahib Diwani, a great landowner, though that marriage ended in divorce. Getting the official title of Queen Mother, she did not really participate in state occasions or charitable work, but did found the Queen Pahlavi Heart Hospital, and was known was being an excellent cook who enjoyed cooking for her family. Before the 1979 revolution, Queen Tadj ol-Molouk was sent by the Shah to the house of her daughter, Princess Shams in Beverly Hills, which was soon attacked by Iranian students and they had to flee to Palm Springs, and eventually she settled in Mexico, where Queen Tadj ol-Molouk died after a lengthy battle with leukemia in 1982.

An Art Deco Design, this Boucheron Diamond Tiara featuring diamonds set within arches was in Queen Tadj ol-Molouk’s possession by 1939, when she wore it for the Wedding Banquet of her son, Crown Prince Mohammad Reza Pahlavi, to Princess Fawzia of Egypt in Tehran. She also wore the Tiara for a series of events and portraits in the late 1930s and the 1940s, when she remained in Iran after Reza Shah was exiled and the new Shah’s marriage to Queen Fawzia broke up.

In 1951, Queen Tadj ol-Molouk wore the Tiara for the Wedding Banquet of the Shah and Soraya Esfandiary-Bakhtiari, and also wore the Tiara for a series of portraits taken in the 1950s. One of the last appearences of the Tiara was when Queen Tadj ol-Molouk wore it at a Banquet following the Shah’s Coronation in 1967, which was one of her last public appearences. After the Iranian Revolution, the Imperial Jewels reverted to the State of Iran and can be viewed by the public at the Museum of the Treasury of National Iranian Jewels, and if the Tiara wasn’t smuggled out of Iran and discreetly sold, it is probably in the Treasury. 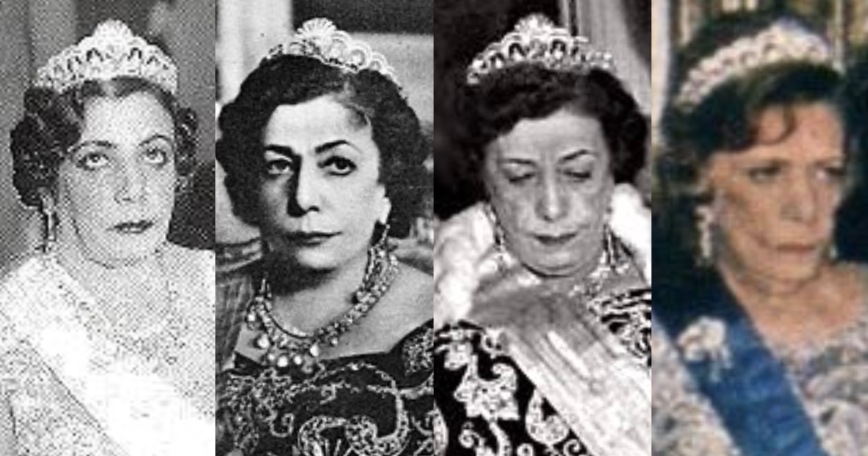