The Funeral of King Edward VII of Great Britain, Emperor of India on this day in 1910. Following the death of the King on May 6th, there was a private lying-in-state in the Throne Room at Buckingham Palace, until May 17th, when the coffin was taken in procession to Westminster Hall for a public lying-in-state, where the coffin was viewed by half a million people.

On May 20th, the funeral procession went from Buckingham Palace to Westminster Hall, where a small ceremony was conducted by the Archbishop of Canterbury with only Queen Alexandra, King George V, Princess Victoria, the Duke of Connaught, and the Kaiser, while the rest of the party waited outside the Hall, while Big Ben, was rung 68 times, one for each year of the King’s life. The Funeral Procession then proceeded from Westminster Hall, via Whitehall and the Mall, from Hyde Park Corner up to the Marble Arch, and thence to Paddington Station, where a train conveyed the mourners to Windsor. The Funeral Procession continued on to Windsor Castle, where the Funeral Ceremony was held in St George’s Chapel.

The Funeral was the largest gathering of European royalty ever to take place, with representatives of 70 countries, including the King Haakon VII of Norway (son-in-law), Kaiser Wilhelm II of Germany (nephew), King George I of Greece (brother-in-law), King Frederick VIII of Denmark (brother-in-law), King Albert I of Belgium. King Alfonso XIII of Spain (nephew-in-law), Tsar Ferdinand of Bulgaria, King Manuel II of Portugal, the Dowager Empress of Russia (sister-in-law), the Archduke of Austria-Este, the Crown Prince of the Ottoman Empire, the Duke of Aosta, Prince Fushimi Sadanaru, the Crown Prince of Romania (nephew-in-law), the Crown Prince of Serbia, Prince Henrik of the Netherlands, the Grand Duke of Hesse and by Rhine (nephew), the Grand Duke of Mecklenburg-Strelitz (cousin), Prince Bovaradej of Siam, and Prince Mohammed Ali of Egypt among a host of Royal Guests and Relatives from around the world. 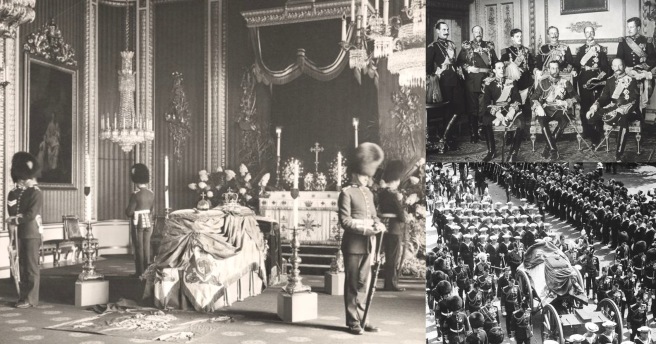