The Patron’s Lunch, the much anticipated finale to the Queen’s Birthday Celebrations, was held on the Mall in front of Buckingham Palace on June 12th. The lunch, held for the Queen’s Patronages, was planned by her grandson, Peter Phillips. Members of the Royal Family attended with the Queen, excepting the Prince of Wales and Duchess of Cornwall who were attending a street party. There was a lunch, a royal walkabout, followed by speeches, and and a parade.

The day started off rainy, but cleared up in time for the royal arrivals. The 10, 000 guests were given a Mark’s and Spencer hampers for lunch, before the Royals arrived on the Mall. The Queen and other Royals were pictured observing the crowds.

Most of the Royal Family traveled down the Mall, and personally greeted the huge crowds. They chatted and shook hands with many members of the public, and made their way to the end of the Mall, where they awaited the arrival of the Queen and the Duke of Edinburgh.

They were joined by other Royals, to view the Parade. Highlights included demonstrations by the patronages, a model of the Queen’s yacht Britannia, a giant model of the Queen’s handbag, and a large number 90. Later, the Royal family posed for a photo taken by the Duke of York, as the Queen and Duke were returning back to the Palace. 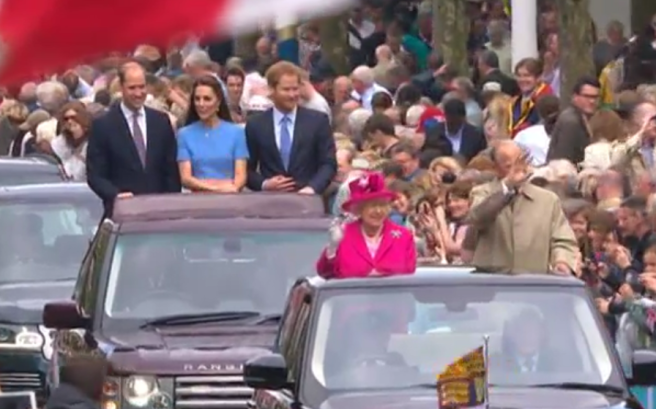 From Her Majesty’s Jewel Vault