The Queen and Duke of Edinburgh welcome President and Madame de Gaulle at the start of their State Visit to Britain on this day in 1960, greeting the Presidential Couple at Victoria Station before riding through London to Buckingham Palace. In the evening, the Queen (wearing the Grand Duchess Vladimir Tiara) hosted a State Banquet at the Palace, which was followed by fireworks from the balcony, joined by other members of the Royal Family, including the Queen Mother (wearing the base of her Crown), Princess Margaret (wearing Marie Feodorovna’s Sapphire Bandeau), the Duchess of Gloucester (in her Turquoise Tiara), the Duchess of Kent (wearing her Kent Festoon Tiara) and Princess Alexandra (in the Kent Circles Tiara), Lady Patricia Ramsay (in her Diamond Tiara), and Lord Mountbatten.  A famous incident from the Banquet:

Once, as the famed French President General Charles de Gaulle and his wife Yvonne were having dinner at Buckingham Palace shortly before the end of his tenure, somebody asked Madame de Gaulle what she was most looking forward to after her retirement. Madame de Gaulle answered, in a strong French accent: “A penis!” Blank stares. Until the Queen rescued the situation by translating: “Ah, happiness.”

The following evening, the Queen wearing the George IV State Diadem, a rare choice highlighting the importance of the State Visit, with the George VI Sapphire Parure), President de Gaulle, the Duke of Edinburgh, Madame de Gaulle, and Queen Elizabeth, the Queen Mother (in the Greville Tiara) attended a glittering Gala Performance at the Royal Opera House in Covent Garden. Other royal attendees included Princess Margaret (wearing the Lotus Flower Tiara), Antony Armstrong-Jones, the Duke and Duchess of Gloucester (in the Teck Turquoise Tiara and Parure), the Duchess of Kent (wearing the Cambridge Sapphire Parure), and Princess Alexandra (in Queen Mary’s Crochet Bandeau).

On the final evening of the State Visit, the Queen (wearing Queen Alexandra’s Kokoshnik Tiara), Duke of Edinburgh, Princess Margaret (in the Halo Scroll Tiara), and Antony Armstrong Jones attended a Return Banquet hosted by President and Madame de Gaulle at the French Embassy in London. 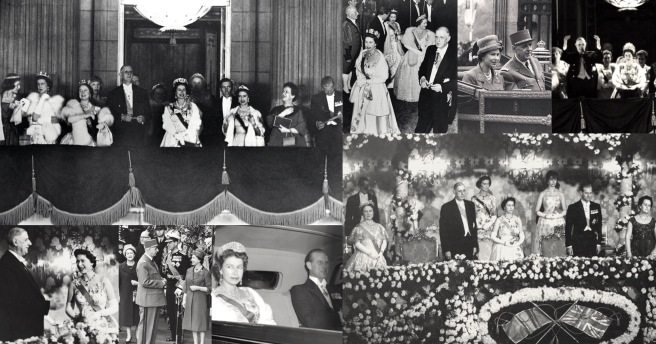