King Willem-Alexander and Queen Máxima of The Netherlands are embarking on their first State Visit to Indonesia, a former Dutch Colony next week, and to mark the visit, we are going to not only feature our usual look at previous State Visits, but also feature some Dutch Royal Jewels with Indonesian connections over the next few days, continuing with the Dutch East Indies Bracelet.

In 1937, the people of the Dutch East Indies, now Indonesia, presented this huge Diamond Bracelet, featuring 1700 diamonds including a massive garuda bird, a mythical bird that is a symbol of Indonesia, set by Bouman in The Hague, as a wedding gift to the then Crown Princess Julianna of the Netherlands, who was involved in the design process, when she married Prince Bernhard of Lippe-Biesterfeld.

The ginormous bracelet was worn quite often by Crown Princess later Queen Juliana throughout her life, often with the Dutch Diamond Bandeau and the Stuart Tiara, most importantly on her wedding day. However, after Queen Juliana’s abdication, the Dutch East Indies Bracelet was broken up to create several smaller bracelets.

Princess Beatrix has worn the Dutch East Indies Bracelets quite often throughout her reign and afterwards, while Queen Máxima also regularly wears one or two of the bracelets, though we have yet to see some of the more striking elements, like the garuda, so let’s home they make an appearance on this State Visit. 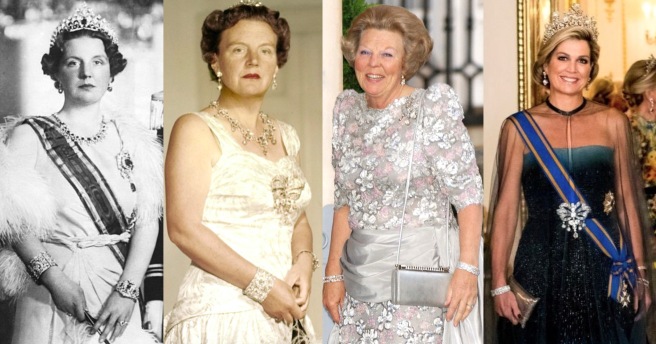