Princess Elizabeth and the Duke of Edinburgh arrived for a two-day trip to Washington, D.C on this day in 1951, during their extensive Tour of Canada, different phases of which we are individually covering over the next few weeks. Following a busy Summer, with the Opening of the Festival of Britain, the Danish State Visit, the Norwegian State Visit, the Tour of Canada was the first sign of Princess Elizabeth and the Duke, who had given up his Naval Career, becoming full-time working Royals in the last few months of King George VI’s life, ahead of her Accession to the Throne.

Princess Elizabeth and the Duke of Edinburgh were welcomed by President Truman and the First Lady at the Airport in Washington, with both the Princess and the President giving speeches:

It is a very great pleasure, Mr. President, for my husband and me to be visiting you here in Washington. During our trip through Canada, I heard much of the warm goodwill felt by the people of the United States towards the people of Canada, and I am glad that before sailing for England we are to have this chance of seeing at least some of the country with which the whole British Commonwealth has so many friendly ties.

“I know it is never possible to understand a country as great as this by visiting only its capital, even such a splendid one as Washington. But so much of the history of the United States has been enacted here, so many memorials of your national achievement stand here, that I hope before I leave to see a little deeper into the sources of your great strength.

“Free men everywhere look towards the United States with affection and with hope. The message that has gone out from this great capital city has brought hope and courage to a troubled world.

“In that other proud capital where I live, and in Canada from where I have just come, we also are determined to work with all our strength for freedom and for peace.” 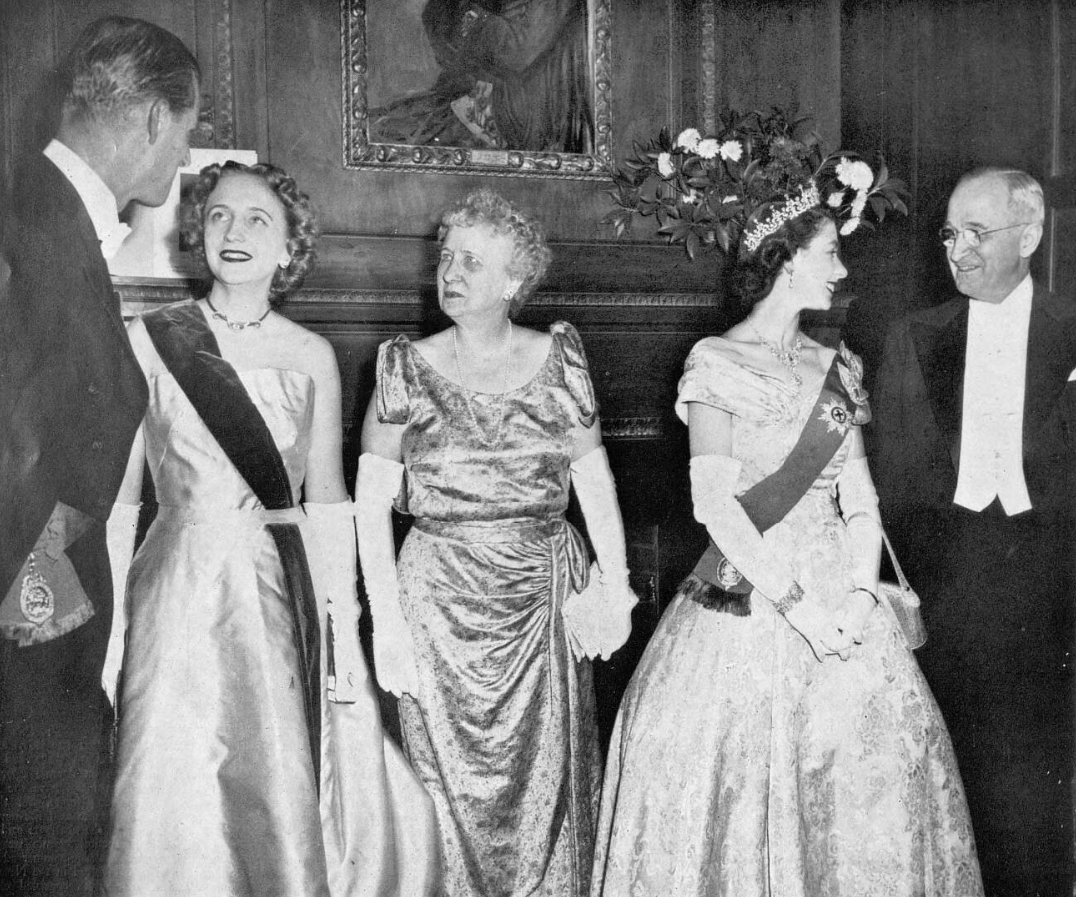 In the evening, Princess Elizabeth (wearing the Girls of Great Britain & Ireland Tiara, her Bahrain Pearl Earrings, the  Nizam of Hyderabad Necklace, and the Order of the Garter) and the Duke of Edinburgh hosted a Gala Dinner for President Truman and the First Lady at the Canadian Embassy in Washington, D.C, since the couple came not as representatives of the United Kingdom but of the Kingdom of Canada.

Princess Elizabeth and the Duke also visited the Capitol Building, the Library of Congress, seeing the tomb of President George Washington on a visit to Mount Vernon, paying tribute at Arlington national Cemetery, and hosting a Reception at the British Embassy as well as attending a Press Club Reception. The visit ended with a ceremony in the Rose Garden of the White House, following which, the Princess and Duke returned to Canada to continue their Tour.