Jonkvrouw Delphine Boël, the illegitimate daughter of King Albert II of Belgium and Baroness Sybille de Selys Longchamps, has been granted the title of Princess of Belgium with the style of Her Royal Highness, and her new official name will be Delphine of Saxe-Coburg. In January, it was confirmed through DNA tests that the King is the father of Princess Delphine, after a long legal battle. Her two children have become Princess Joséphine and Prince Oscar of Belgium, also with the style of Her Royal Highness, under a Royal Decree from 1991 that stipulated that all descendants (male line and female line) of King Albert II would become ‘HRH Prince(ss) of Belgium’, which was then limited to children and grandchildren of the King and Heir Apparent in 2015.

UPDATE- King Philippe received his half-sister, Princess Delphine, for Lunch at the Royal Castle of Laeken on October 9th, which was their first proper meeting. They said:

This Friday, October 9th, we met for the first time at Laeken Castle. Our meeting was warm. We had the opportunity to get to know each other during a long and rich exchange that allowed us to talk about each other’s lives and shared interests. This bond will now develop in a family setting. 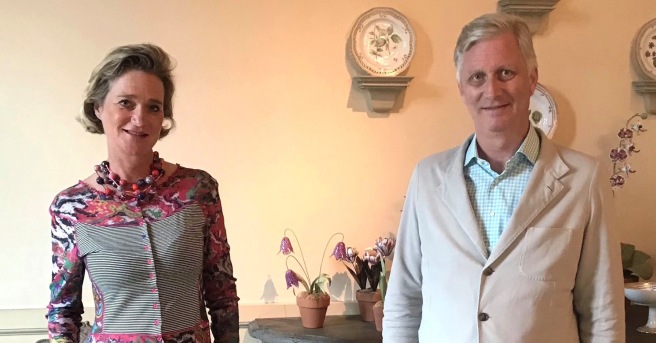 Delphine Boël, the illegitimate daughter of former King Albert II of Belgium and Baroness Sybille de Selys Longchamps, and her two children have been granted the title of Prince/Princess of Belgium with the style of His/Her Royal Highness, after a long legal battle: (link in Bio)