Commissioned by the Russian Tsar as a wedding gift for his only daughter when she married the son of Queen Victoria of Great Britain, the Ruby Tiara was worn by her descendants from the German Princely Family of Hohenlohe-Langenburg, most notably the sister of the Duke of Edinburgh, before being auctioned in the 1970s.

Made by the celebrated Russian jeweller; Bolin, in 1874, the Ruby Tiara was of foliate scroll design set with cushion-shaped diamonds, decorated with six flowerhead cluster motifs each set with cabochon rubies in cushion-shaped diamond borders. The tiara was accompanied by a large parure, which included a necklace, earrings, three brooches, a ring, and a stomacher which later went missing.

A post shared by ⚜️ Every Inch A Queen ⚜️ (@royalsinhistory)

Grand Duchess Maria Alexandrovna wearing her Bolin Ruby Tiara and Parure at the Coronation of her nephew, Tsar Nich… twitter.com/i/web/status/1…

The Bolin Ruby Tiara was commissioned by Tsar Alexander II to give as a wedding gift to his only daughter, Grand Duchess Maria Alexandrovna, when she married Prince Alfred, Duke of Edinburgh in 1874. The Grand Duchess, who had become the Duchess of Saxe-Coburg und Gotha, was pictured wearing the necklace and stomacher with her Fringe Tiara at the Coronation of her nephew, Tsar Nicholas II, in 1896. 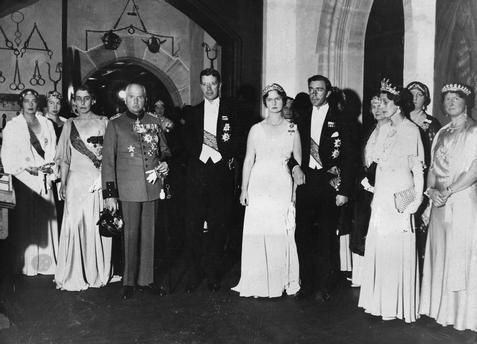 After the Grand Duchess’ death in 1920, the Bolin Ruby Parure was inherited by her third daughter, Princess Alexandra of Saxe-Coburg and Gotha, who was married to the Prince of Hohenlohe-Langenburg, who was pictured wearing it at the Wedding Gala of Prince Gustav Adolf of Sweden and Princess Sibylla of Saxe-Coburg-Gotha in 1932.

Princess Margarita of Greece wearing the Bolin Ruby Tiara at the Coronation of her sister-in-law, Queen Elizabeth I… twitter.com/i/web/status/1…

However, the Parure was frequently worn by Princess Alexandra’s daughter-in-law, Princess Margarita of Greece, a sister of the Duke of Edinburgh, who wore the Bolin Ruby Tiara for a portrait in the 1930s, and then more famously at the Coronation of her sister-in-law, Queen Elizabeth II, in Westminster Abbey 1953, which the sisters were allowed to attend after being barred from attending their brother’s wedding in 1947.

Following a devastating fire at Schloss Langenburg, the family seat, in 1963, the Tiara and Parure, along with other jewels, were sold in its entirety at Christie’s in 1978, and though the tiara has been broken up, it has reappeared at auction a few times since, most notably in 1989 with a pair of earrings, three brooches, a ring created from the Tiara appearing at auction in 2006.

Royal Jewels of the World Blog