Day 7 of the Royal Tour of India and Bhutan started at Paro airport. They left Bhutan in rain, and landed in Agra in 40*C. The visit of TRH to the Taj Mahal signalled the completion of the Tour.

The day started at Paro Airport in Bhutan, where TRH boarded a plane to India. There were some photos taken at the airport, but most of them were from the airplane.

TRH were met by Indian authorities upon landing at Agra airport, and taken to their hotel. After lunch at a local restaurant with their tour guide, the Duke and Duchess arrived at the Taj Mahal. Throughout the day, there had been a discussion on social media on wether TRH would sit and pose in the famous bench, which is the site of an iconic photograph of Diana, Princess of Wales sitting alone.

The Duke and Duchess made their way to the bench, and posed for the media, much to the delight of the Royal reporters and Royal watchers at home. It was also significant, because their posing in front of the building of eternal love signifies their love for each other, just before their 5th anniversary. When Diana, Princess of Wales sat alone on the same bench, it signified the end of her marriage.

Afterwards, TRH had a private tour of the Taj Mahal. Their guide, Mr Mohammad said: “They were fascinated by the story of the king and the queen and the love that made him build the monument to her.” TRH were described as “down to earth, very casual. They were so, so easy to talk with them. For me, I was quite nervous but they were very normal, down to earth. Specifically the Duchess, she was very enthusiastic about how this was built.” He added: “She was asking about the inscriptions and what they mean. They were quite fascinated how it was done four centuries back, especially the lady. She was quite fascinated about the skills of those people and did they do it without using any modern tools and techniques.” Afterwards the couple gave a small unprecedented interview afterwards. The Duke said: “I’m glad you have got your hats on. It is beautiful, isn’t it. It was overwhelming.”

For the flight, the Duchess was wearing a white broderie anglaise dress, with a necklace duplicating a Buddhist symbol, which is a gift from the Queen of Bhutan. The Duke was wearing a blue suit, with a blue-grey tie. For the visit to the Taj Mahal, the Duchess wore a white and blue dress by Indian designer Naeem Khan, as well as dark blue earrings she had bought yesterday from a stall at the foot of the Tigers Nest Monastery. The Duke wore a white shirt, blue jacket, and chinos. 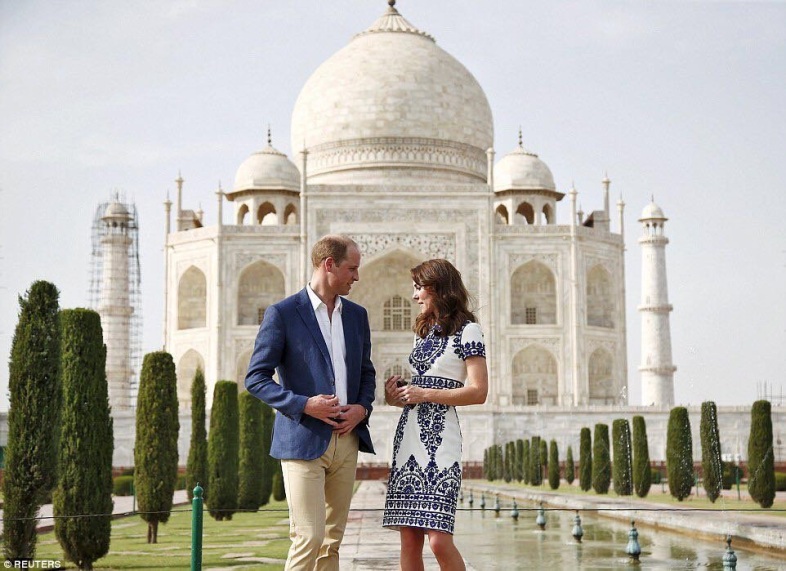 Today was the last day of the much anticipated Royal Tour of India and Bhutan. The Duke and Duchess completed 22 official engagements in just 7 days. TRH have boarded a British Airways flight from Delhi, and will probably travel straight to the Middleton family home, where Prince George and Princess Charlotte wait their return. I will post another blog, which will contain some additional information, as well as the posts for each day of the tour.