King Carl XVI Gustaf and Queen Silvia of Sweden are hosting the Governor General and Viceregal Consort of Canada, David Johnston and Mrs. Sharon Johnston, on a four-day State Visit to Sweden from February 19th to 23rd. On the evening of February 20th, the King and Queen will host a glittering State Banquet at the Royal Palace of Stockholm in honour of their guests. Queen Silvia, Princess Sofia, and Princess Madeleine will be the three Swedish Royal Ladies in attendance. Vote Below on what Tiara you think they might wear: UPDATED- Check out the Canadian State banquet HERE

Queen Silvia usually alternates between the Nine Prong Tiara and the Connaught Tiara for incoming State visits. Will she repeat her tried and tested favourites tonight or will she wear another tiara?

Until the Nobel Prizes last December, Princess Sofia had only worn one tiara, her emerald necklace tiara. But for the Prize Ceremony she made her first appearance in the Cut Steel Bandeau, and for the King’s Dinner, she wore the Four Button tiara. Will she revert back to her wedding tiara, or will she continue her streak and debut another tiara from the enormous family collection? 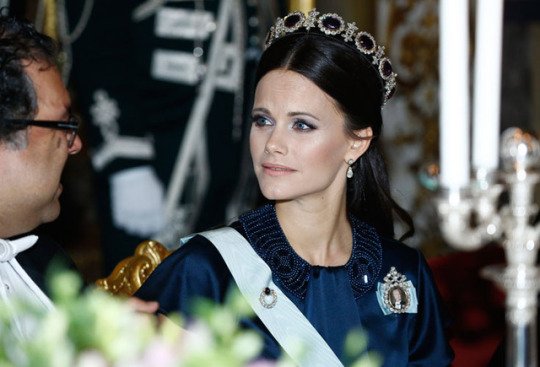 UPDATE: Princess Sofia continued her streak and surprised us by debuting Queen Josephine’s Amethyst Tiara for the Canadian State Banquet.

In recent years, Princess Madeleine has usually worn her personal tiara, the Modern Fringe, for most Gala events, but she has surprised us with other tiaras. For tonight’s State banquet, will she stick to her favourite, or will she wear another tiara?

UPDATE: Princess Madeleine did surprise us and wear the Aquamarine Kokoshnik Tiara for the Canadian State Banquet.

This page has updated with verification about the Tiaras.